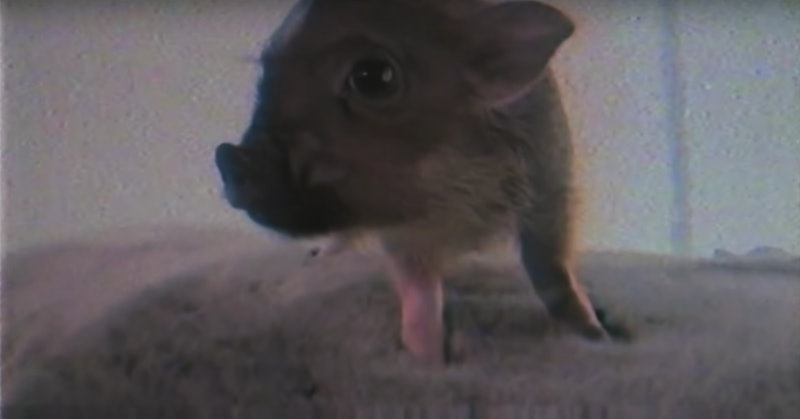 Ariana Grande, probably one of the biggest names in pop music today, has been in the news a lot since her album sweetener came out in August. The album debuted at number one in the U.S. and nine of the songs from the album ended up on the Billboard Hot 100. One of those songs — a standout among fans and critics — also just got the music video treatment, and fans are definitely going to want to see this one. Ariana Grande and Pete Davidson's pig is in her new video for "Breathin,'" and it's the perfect form of self-care.

In the video, which premiered on YouTube on Oct. 10, Grande's newest addition to her family, Piggy Smallz, is seen walking around on top of a blanket, being its perfect piggy self, while the song plays in the background. A 30-second video recording of Piggy Smallz plays on a loop to fit the length of the tune, and the curious little pig is seen just sniffing around the furry environment, sometimes aware of the camera in front of it. Grande doesn't appear in the video herself, but even so, it's still pretty perfect and guaranteed to make every viewer smile.

Grande and Davidson adopted the teacup pig in September. Since then, Davidson has gotten a tattoo of Piggy Smallz and the adorable creature has become a fixture in Grande's life and social media posts. Grande has even made Piggy Smallz the star of music videos before, just not with her own music. Just one day before dropping the video for "Breathin'," Grande shared a short Instagram video of herself cuddling with Piggy Smallz as Aerosmith's "I Don't Wanna Miss a Thing" played in the background.

Earlier on Oct. 10, Grande posted to Instagram thanking her fans for everything and listing off things she's trying to do for them (tour dates, her docuseries, etc.). She also mentioned how she's hoping there's time to film a video for "Breathin'," but it's unclear if this was it, or if there's still another video coming later on too. Considering the singer's current love affair with Piggy Smallz, it would make sense if this was truly the official video.

Grande recently confirmed on Twitter that Piggy Smallz is an emotional support pig — it's illegal to own any type of farm animal as a pet in New York City — and, thus far, it looks like the adorable pig has been the best medicine. So it makes sense that Piggy Smallz would be the perfect mascot for her new video. After all, as Grande also told Jimmy Fallon, "Breathin'" is actually about her personal struggle with anxiety:

'Breathin' is about breathing when you're anxious. It's about anxiety and feeling like when you can't get a full breath. It's like the worst feeling in the whole world. It's a song about that feeling, I was having lots of [anxiety attacks]. We were in the studio, we were writing and I was like, 'Ugh can't breathe.' And they were like, 'We're going to write this song.' And I was like, 'OK, I still can't breathe, but we'll write it.'

Anyone who struggles with anxiety can tell you that the song really does hit home. And if Piggy Smallz has been able to help Grande deal with her anxiety, then the pig really does deserve to be the star of this show. Plus, the video in itself is super anxiety-reducing. I mean, that cute little nose alone is the purest form of self-care there is.

More like this
The Best Memes & Tweets About Beyoncé’s Surprise “I’M THAT GIRL” Video Teaser
By Brian Anthony Hernandez
Britney Spears’ Comeback Song With Elton John Will Be Her First Single in 6 Years
By Jake Viswanath
Taylor Swift Wanted To Be In 'Twilight: New Moon,' According To Its Director
By Grace Wehniainen
An Ultimate Guide To The Music Of 'Rap Sh!t'
By Brad Witter
Get Even More From Bustle — Sign Up For The Newsletter