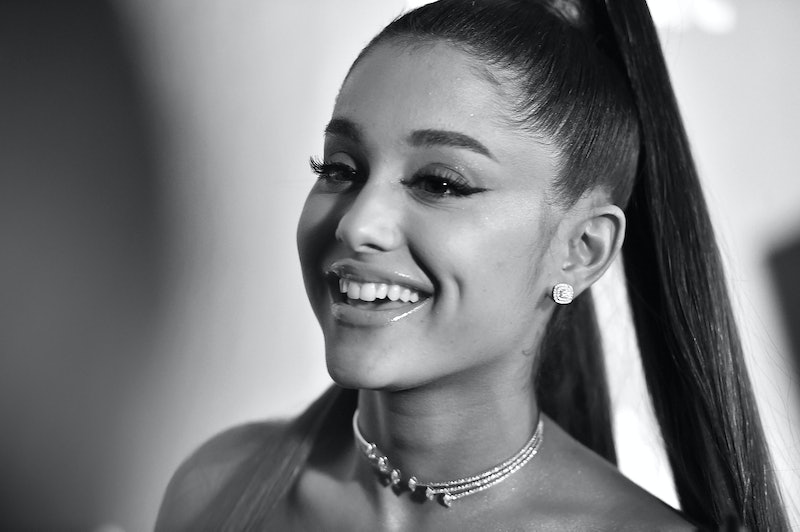 Three singles into the rollout of her new album Thank U, Next, Ariana Grande's reaction to her 7 Rings Billboard Hot 100 ranking epitomized the singer's attitude in general: she focused on gratitude, love, and appreciation for everyone who helped her make it happen. In response to a tweet by Chart Data that declared her to be only the third female artist to have multiple number one debuts in Hot 100 history, Grande tweeted her seeming shock. Then, she posted another tweet that displayed just how appreciative she was of the love.

First, the artist tweeted a really long ellipses followed by a question mark, indicating her disbelief at the huge honor (Grande's achievement follows that of Mariah Carey and Britney Spears, who both have managed the same feat). Grande's subsequent longer message read in full,

our second number one debut in three months. i love the people i made these songs with more than words can express. on some true, forever shit. i’m gonna cry again so this is where this caption ends lmao. thank y’all for everything. i’m externally grateful.

In true Grande fashion, she followed up with one last tweet to clarify a typo: "eternally* cool"

According to Billboard, Grande also debuted at number one on Billboard's Streaming Songs chart, which measures the volume of song streams each week. Grande's "7 Rings" received 85.3 million song streams in its first week, the publication reports, which marks the largest streaming number for a new single since Grande released Thank U, Next, in December.

Per Billboard, "Thank U, Next" drove 93.8 million streams in its first week. In total, Billboard confirmed that Grande now is responsible for three of the five biggest streaming weeks by women ever, through those two singles: "Thank U, Next" holds the number one position for most streams of all time in the week following the music video release in December, as well as the fourth position for the original single release in November; additionally, "7 Rings" coming in second place. Taylor Swift's "Look What You Made Me Do" and Adele's "Hello" take the two other spots in the top five, according to Billboard.

Grande has been outspoken in recent weeks about how collaborative her experience was while making her third studio album, Thank U, Next. In her acceptance speech for the Woman of the Year award at the Billboard Women in Music event in December, Grande called out her best friends, Victoria Monet and Tayla Parx, for their help. She said in part, "I'm so grateful we got to make this album together, and have some of the most fun times of my life. I wouldn't have made it through this last chapter of my life without you guys."

At the end of her speech, Grande highlighted her own personal beliefs about what matters in life — and, spoiler, it's not material things. She said, "I have everything I've ever dreamt of having, and as of late I've discovered that it's the things I've always had and the people I've always had that still make me the happiest."

Grande's third album, Thank U, Next, is set to release on Feb. 8, according to Rolling Stone. She has since posted her full track list on Instagram.