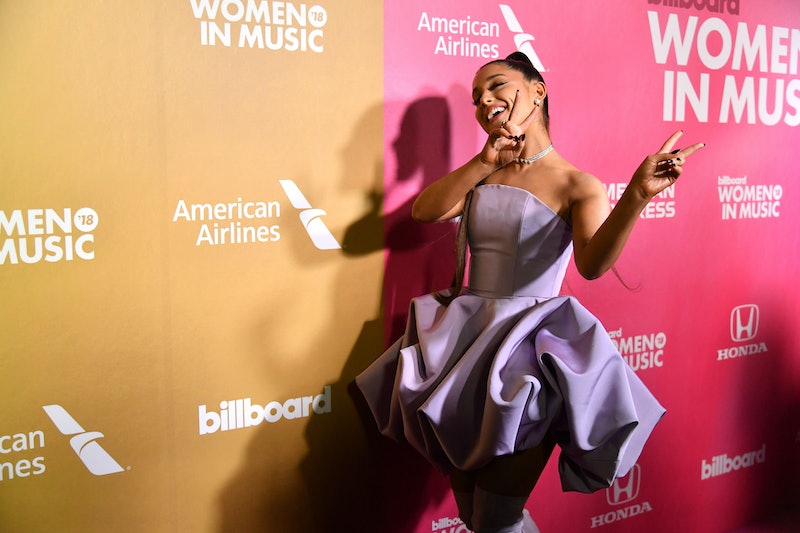 No one can hype up a song (and music video) like Ariana Grande. She's mastered the art of turning a song's debut into an event, making her a true expert when it comes to building up the anticipation. And she did just that with her new song "7 Rings," released Thursday at midnight. Ariana Grande's "7 Rings" song lyrics focus on empowerment and having fun with her friends, and they're so worth a read.

Grande's latest single is all about her independence, in the wake of the "bad sh*t" she's gone through. One of the verses to "7 Rings," which plays off of "My Favorite Things" from The Sound of Music, reads in part,

Wearing a ring, but ain't gon' be no "Mrs."/Buy matching diamonds for six of my b*tches/I'd rather spoil all my friends with my riches/Think retail therapy my new addiction/Whoever said money can't solve your problems?/Must not have had enough money to solve 'em/They say "Which one?" /I say "Nah, I want all of 'em"/Happiness is the same price as red-bottoms

At other points of the song, Grande sings about her own sense of agency: "Rather be tied up with cuffs and not strings/Write my own checks like I write what I sing, yeah."

Many fans got a head start to analyzing the song's lyrics since Grande posted some hints before she even released the track. On Jan. 14, the songstress tweeted what seemed like "7 Rings" lyrics: "my smile ? ..... iss beamin." Grande followed up that tweet with "the way ..... it shiiiiiiine i know ...... u seen it."

At the time, fans figured she was either blessing them with a lyrical preview or she was just joking around in order to build up even more anticipation for "7 Rings." Now that the song is out, we can clearly see where these tweets fit into the world of the song.

In a Jan. 13 tweet, the Grammy Award nominee described "7 Rings" as "a flex." As vague as that is, she further elaborated that it is a "friendship anthem" that describes "how the homies WANT u to feel. what the ‘thank u next’ energy evolves into while embracing a new chapter."

In essence, it's a feel-good sequel to "thank u next." This makes sense since the car in the music video for that song had a license plate that said "7 Rings."

Back on Dec. 1, Grande shared her inspiration for "7 Rings." The pop star tweeted, "me, vic, courtney, alexa, tayla, njomza, kaydence (and my mom and nonna so technically nine but they got theirs after song was done)."

"well ............. ‘twas a pretty rough day in nyc. my friends took me to tiffany’s. we had too much champagne. i bought us all rings. it was very insane and funny. & on the way back to the stu njomza was like ‘bitch, this gotta be a song lol’. so we wrote it that afternoon."

Ariana Grande is the only one can casually buy seven rings at Tiffany's, get two more for her mom and grandmother, and turn that memorable hangout into another great song.

Caroline Burke contributed to this report.

More like this
Everything To Know About Taylor Swift’s 10th Studio Album, 'Midnights'
By Grace Wehniainen and Jake Viswanath
Twitter Is Freaking Out Over Rihanna’s 2023 Super Bowl Halftime Show Announcement
By Stephanie Topacio Long
The Spice Girls Just Dropped A Brand New Music Video
By Sam Ramsden
Ed Sheeran’s Surprise Gig Included An Iconic Britney Spears Tribute
By Bustle Editors and Darshita Goyal
Get Even More From Bustle — Sign Up For The Newsletter