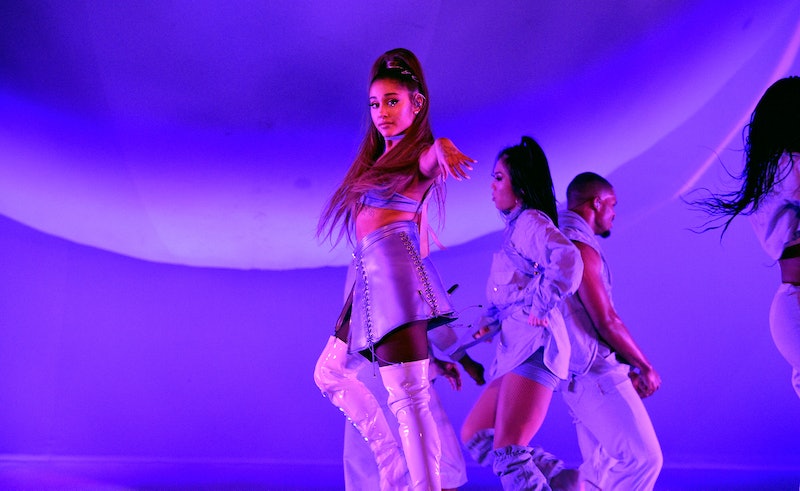 Fans might think hearing Ariana Grande live would be a once in a lifetime experience, but now they can take her performances with them everywhere. Ariana Grande's Sweetener Tour live album is here, coming out just hours after her highly successful world tour came to an end on Sunday, Dec. 22, with a final show at The Forum in Los Angeles. And given its brilliant title, k bye for now (SWT Live), it's also a parting gift for fans from the artist before she takes a much-deserved break.

The singer officially revealed that the album was dropping during the show, when she and her dancers descended below the stage one last time as "k bye for now" was projected on the screen, a moment that Grande shared on Twitter. She later shared a link to the album and a sweet message to fans on social media, writing "thank u, swt. ‘k bye for now (swt live)’ out now. love u."

The new album features live renditions of a whopping 32 songs that she performed over the course of the tour, ranging from well-known hits like "7 rings" and "Into You," to fan-favorite deep cuts like "Tattooed Heart" and "Goodnight n Go." So basically, the album is almost as long as her iconic ponytail. The record also includes existing features from collaborators Childish Gambino, Nicki Minaj, and Big Sean.

The album comes after months of Grande teasing the project on social media. The singer first revealed that she was working on a live album back in October 2019. "so .... i got a bunch of my live vocals from tour on my laptop," she tweeted. "about to start comping thru and picking my favorite adlibs / performance moments on this flight ... just in case u want a live album one day."

Grande continued to document the creation process on social media in the following weeks, revealing that she was in charge of producing all of her vocals for the album. "been prepping these vocals for the live album / listening to first pass mixes & am so excited," she said. "vocal producing everything myself." k bye for now has obviously been a labor of love for Grande, and one completed right before Christmas to boot. How generous of her.