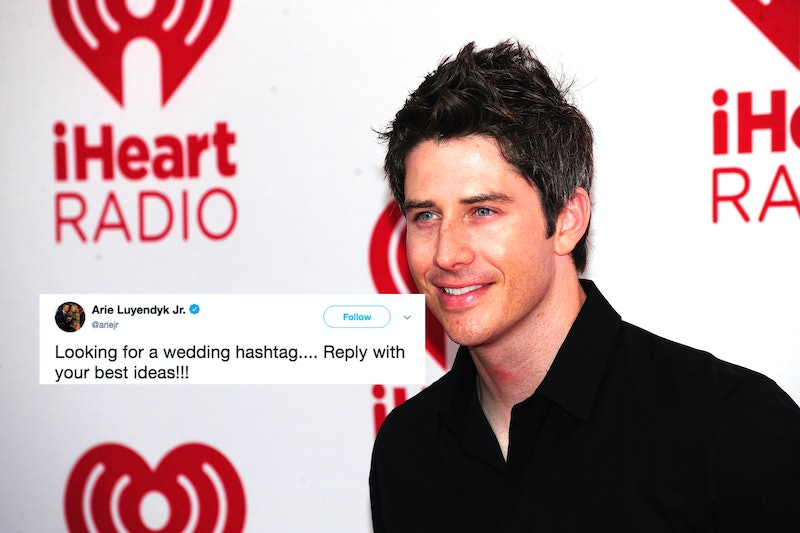 If you become a so-called villain in Bachelor history, asking Twitter for its opinion on anything can be like opening up a can of worms. Still, the star of the 22nd season of ABC's The Bachelor wants people's opinions. Arie Luyendyk is asking Bachelor fans for wedding hashtag ideas when the rose has barely wilted. And while some of the show's fans are using the request as an excuse to throw shade, others seem happy for him.

On Monday night, Luyendyk, a 36-year-old race car driver, wrote a succinct tweet to his fans, saying, "Looking for a wedding hashtag.... Reply with your best ideas!" The request elicited hundreds of responses, with many deliberately mocking him for the dramatic finale in his season.

In March, after proposing to publicist Becca Kufrin in his season's final episode, Luyendyk realized he was not all in on the woman he chose; instead, he discovered he still had feelings for a runner-up. In the post-finale After the Final Rose special, he decided to break off his engagement to Kufrin, choosing instead to go after Lauren Burnham. The awkward breakup that aired was unedited and ran for almost an hour.

Now, Luyendyk and Burnham are looking ahead. The pair has already bought a new house in Scottsdale, Arizona, where Luyendyk is based, and plan to wed in Hawaii January 2019, according to The Hollywood Reporter. The nuptials won't be televised, but that doesn't mean the wedding won't get attention. The hashtag callout has already garnered some smart, if snarky, responses.

Another questioned if he was sure he made the right choice.

And then there were Kufrin defenders who seemed to say "good riddance" to the two.

And then there was this hashtag, which had no chill.

Others took the challenge seriously. One user had a clever hashtag idea, melding the symbol of the show with Luyendyk's career.

One Twitter fan played off his name to personalize a classic wedding phrase.

Another earnest fan capitalized certain letters in their last names to highlight the end of her maiden name and the start of their shared one.

The shade directed at Luyendyk is very real, and the tweets show some fans haven't quite let go of their old feelings. After Luyendyk snubbed Kufrin, she went on to become the next Bachelorette. Last month, the former Bachelor star shared some acidic direct messages he had received during Kufrin's season of the show. According to Us magazine, as Kufrin had to decide between the final two men, Luyendyk posted on Instagram to show some nasty comments that fans had for him, including one that read, “Because your one of the biggest pieces of sh*t that could live on this planet" and "you ugly ass walmart version of rob lowe."

Luyendyk was able to respond with restraint to those comments, saying, “Thanks for all the positive messages, we all need a lift now and then.” The Bachelor star seems to be able to take some sharp jabs from the public and still keep his cool, and though there were some pointed hashtags this time around, he's likely already been through the worst of it.