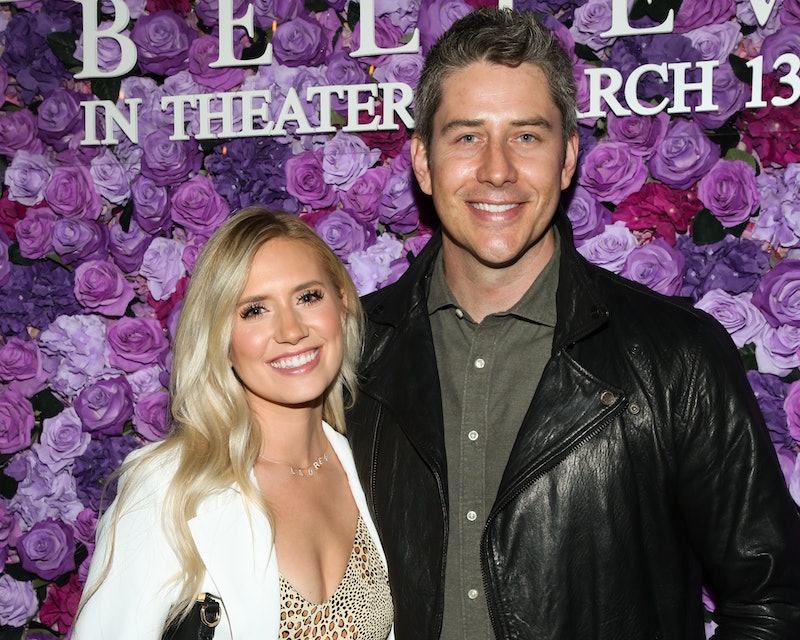 Their romance may have gotten off to a rocky start on The Bachelor, but Arie Luyendyk Jr. and Lauren Burnham's relationship post-show has proven to withstand the test of time. The couple — who are returning to the franchise as guest judges on the Bachelor spinoff series Listen To Your Heart — celebrated their one year wedding anniversary back in January and are mere weeks away from seeing their daughter, Alessi, turn one year old. So when it comes to listening to your heart and fighting for each other against all odds, these two will definitely be able to share some insight for the remaining Listen To Your Heart pairs.

During Arie's season of The Bachelor, he ultimately ended up proposing to Becca Kufrin instead of Lauren, who was his runner-up. However, his lingering feelings for Lauren proved to be much stronger than he initially realized, which led to his decision to break up with Becca (very publicly, on-camera) and reunite with Lauren shortly thereafter. They got engaged during his After the Final Rose special and the rest, as they say, is history.

Since then, they've wasted little time in building a life together and currently serve as real estate agents in Arizona, proving that despite the initial backlash their relationship may have faced, they have zero regrets about find their way back to each other.

"At the end of the day it’s a decision that leads to the rest of your life and however hard and complicated it’s 1000% worth the risk," Arie wrote in an Instagram caption back in March just before Peter Weber's Bachelor finale aired. "Don’t know how this season ends but don’t be quick to pass judgment if it isn’t what you at home want or expect from it. So much more to this journey than the viewer sees."

Both Arie and Lauren have remained connected to the Bachelor franchise that brought them together, evening going so far as to host their own YouTube series Bachelor Brunch throughout Peter's season. And now they'll be able to impart some of that Bachelor wisdom on Listen To Your Heart.

As for what lies in their future, the couple currently have their hands full occupying their daughter during a pandemic, though they make a point of documenting their days fairly regularly on various Instagram Stories. Whether it involves Lauren cutting Arie's hair while in quarantine or just featuring adorable videos of Alessi, it's clear just how happy they are to be together. And they definitely plan on having their budding family grow — eventually.

"It's definitely a difficult time to even think about having another baby, but we love her so much that we absolutely want to have another sibling for her soon," Lauren told Us Weekly back in July 2019. "Well, not soon, but we're thinking maybe like when she's 2. We kind of want them spread out a little bit."

Looks like some Bachelor fairytales can have a happy ending after all.