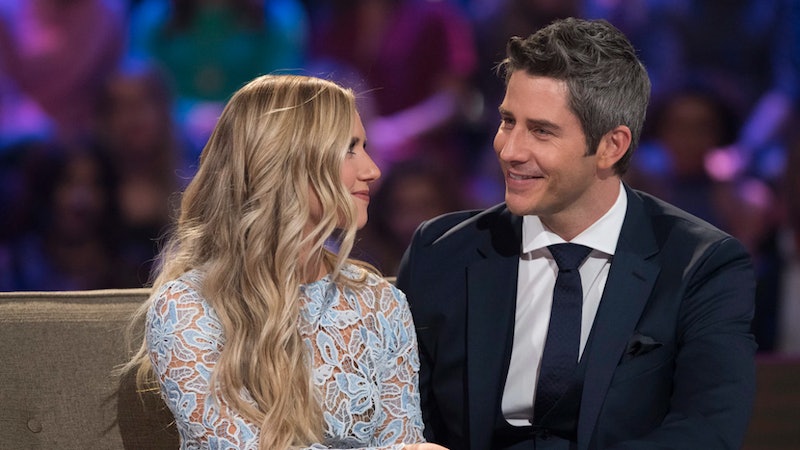 Monday night's Bachelor finale was full of some pretty awkward and stress-inducing moments (and no, we're not just talking about Colton's haircut). Now knowing that he was completely in love with Cassie, Colton proceeded to show her just how much he cared by breaking up with his other two contestants, Tayshia and Hannah G. But while some fans may not have agreed with his decision, Arie Luyendyk Jr.'s comments about Colton's Bachelor finale offers up a message of support and encourages fans not to judge Colton too harshly for following his heart.

"I truly believe life rewards you when you follow your own path. Not paved by others but paved by your belief in what’s right for you," Arie wrote in a caption on Instagram, alongside a photo of him proposing to his now-wife Lauren Burnham on last year's After The Final Rose special. "I know many of you have your own opinions but be kind and open to the choices and decisions of the individuals that put their hearts on display. Good luck @coltonunderwood and as @laureneburnham would say #lovewins."

Arie's Bachelor season faced a lot of controversy as well when he broke up with winner Becca Kufrin in order to pursue a romantic relationship with Lauren, his runner-up, who posted her own throwback photo of their engagement last week.

Taking that into account, Arie knows better than anyone what it's like to be judged for making choices that don't follow the typical Bachelor protocol. Fans instantly felt bad for Becca and some may have been tempted to peg Arie as the villain of the story. (It didn't help that the excruciatingly awkward breakup was televised for all to see.) But now that Arie and Lauren are married and expecting a baby girl in early June, it's clear Arie ultimately did the right thing by following his heart. Is it a shame that Becca had to be hurt in order for him to get to that point? Absolutely. But that's the thing about reality dating shows — sometimes it's hard to make the correct decision when given so little time and with constant cameras in your face.

Similarly, Colton ended up parting ways with two amazing women who were obviously in love with him, which made the breakups all the more heartbreaking to watch. It'd be easy to scoff at his decision to walk away from these remaining two contestants who could make him very happy. Even Colton was grappling with whether or not he was doing the right thing. But when it comes down to it, he didn't feel right being with anyone else when he cares for Cassie as deeply as he does. Sure, it could end up blowing up in his face, but he's staying true to himself, which is commendable.

We won't know until the second part of Colton's finale airs on Tuesday night whether or not his gamble ends up paying off. Will Cassie take him back now knowing just how much he cares about her? Hopefully whatever happens will result in Colton getting as happy of an ending as Arie and Lauren.