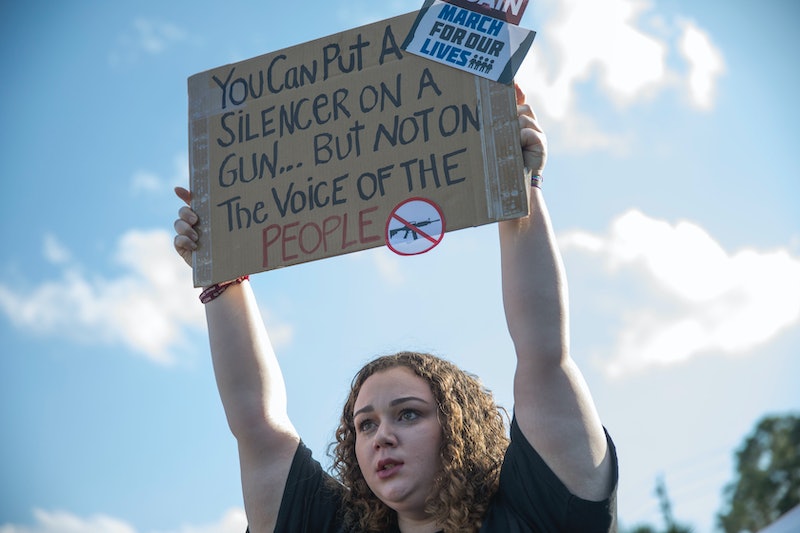 In the year since the Parkland, Florida school shooting, March For Our Lives activists have not stopped advocating for policies aimed at preventing gun violence. The movement's major successes have come directly from those who worry about the potential for gun violence in their own schools. And this week, state lawmakers introduced an Arizona school safety bill written by high school students, which doesn't rely on armed guards to make local schools safer.

"Today students from across the state came to the capitol to introduce #HB2597 - a bill written by students," tweeted Jordan Harb, a high school activist and executive director of March For Our Lives Arizona. "So proud of everyone who shared their stories to advocate for prevention rather than reaction. We need counselors, not armed guards."

So far, the bill has been introduced in Arizona's House of Representatives and has numerous co-sponsors, as well as a group of high schoolers willing to lobby for its success. While the overarching goal of the bill is to prevent gun violence, the text of the bill doesn't even mention gun control policy. Instead, its purpose is to create a safer school environment for kids by addressing teenage mental health.

The text of the bill begins by explaining the basis for the plan to make schools safer:

Beginning in the 2022-2023 school year, each school district shall adopt a safe schools plan to provide recognition, initial screening and responses to emotional or behavioral distress in students, including indicators of possible substance abuse, violence and youth suicide.

As Harb explained in his tweet, the purpose of the bill is "prevention rather than reaction." According to US News, one of the best ways to prevent gun violence is by recognizing and treating the signs that someone could become violent well before the violent act actually happens. It's an overgeneralization to say that mental illness has a direct connection to gun violence, as The New York Times outlined, because most people diagnosed with a mental illness do not go on to commit violent crimes.

However, The Times explained that there is evidence of a weak link between certain types of mental illness and mass shootings, so taking care of teenagers who display the "red flags" associated with gun violence could both prevent the shootings in the first place and improve the lives of the teens in question.

Beyond taking a step toward safer schools in Arizona, this bill also continues March For Our Lives' momentum, which took off in the month after the Parkland shooting and hasn't stopped since. Students across the nation have held rallies, lobbied for bills aimed at preventing gun violence, and toured the country to continue the discussion. And in response, numerous state legislatures have passed bills addressing gun violence, according to the nonprofit Pew Charitable Trusts.

Arizona's HB 2597 doesn't attempt to take guns out of circulation in the state, nor does it aim to limit the types of guns that can be purchased. However, the bill's advocates believe it would help prevent tragedy from striking in Arizona schools.