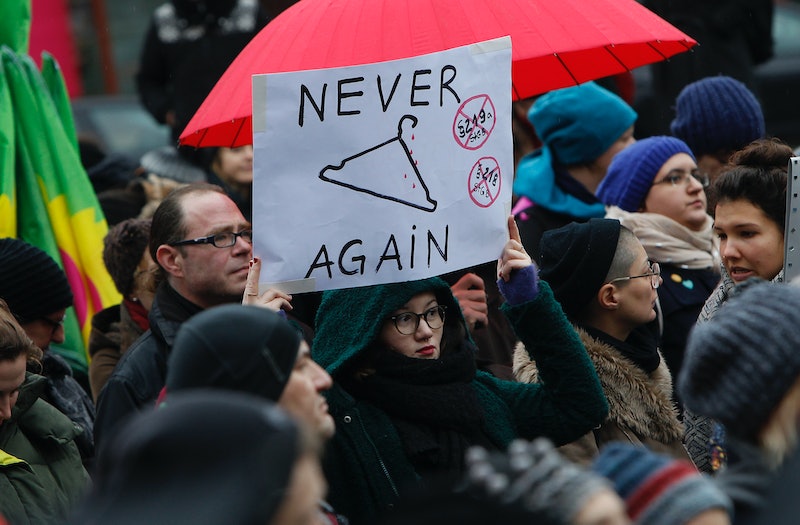 One more state is poised to criminalize abortion if the Supreme Court ever overturns its ruling that's been in effect almost five decades. On Tuesday, the Associated Press reported that Arkansas passed a "trigger" abortion ban that will go into effect if Roe v. Wade were ever overturned — something abortion advocates worry is possible in the current political climate.

Gov. Asa Hutchinson signed the measure into law this week after a heated debate in the state House, though the vote wasn't close. SB149 — also known as Act 180 — was passed by a margin of 29 to 6 in the state Senate and 72 to 20 in the state House, with eight abstentions. As written, the law would only come into effect if the Supreme Court overturned Roe, or if a constitutional amendment were adopted allowing the prohibition of abortion.

After the bill passed the state House, Rita Sklar of the Arkansas ACLU told the Arkansas Times that the group would challenge the law if the governor signed it. "Criminalizing abortion will not make it more rare, just less safe," Sklar said in the statement.

If the ban ever goes into effect, the only exception would be medical emergencies, as the law does not include exceptions for cases of rape or incest. Notably, medical emergencies under the ban do not include instances where psychological diagnoses warrant an abortion to save a woman's life. It explicitly allows cases of "physical disorder, physical illness, or physical injury, including a life-endangering physical condition caused by or arising from the pregnancy itself."

Performing an abortion would be considered an unclassified felony and would be subject to 10 years in jail, a fine of $100,000, or both. The measure does not, however, "authorize the charging or conviction of a woman with any criminal offense in the death" of the fetus. Given the wording of the rest of the text, "death" is to mean "abortion."

Plan B and other contraceptives are explicitly permitted, as long as they are used "before the time when a pregnancy could be determined through conventional medical testing."

The vast majority of the text of the "trigger" law — named the "Arkansas Human Life Protection Act" — is made up of criticism of the Supreme Court for "the crime against humanity which is being perpetuated" by its decisions. The text reads that Arkansas "urgently pleads with the United States Supreme Court to do the right thing."

It also makes comparisons to Supreme Court decisions on slavery and segregation, noting that the court has "committed a grave injustice" and "crime against humanity" in the past. The authors endorse Brown v. Board of Education, seemingly to call for a corresponding ruling on abortion that would overturn prior decisions.

Arkansas already bans abortion at 20 weeks, and another bill was submitted to limit the timeline further to 18 weeks. No other such law has ever been allowed to stand by the courts, though Mississippi's and Louisiana's laws remain in federal court.

Other states with abortion bans on the books that would be triggered by a Roe v. Wade repeal are Louisiana, Mississippi, North Dakota, and South Dakota. A similar bill has been introduced in Tennessee and another in Kentucky.

However, a July 2018 NBC/Wall Street Journal poll found that support of Roe v. Wade in the general public is upward of 70 percent.