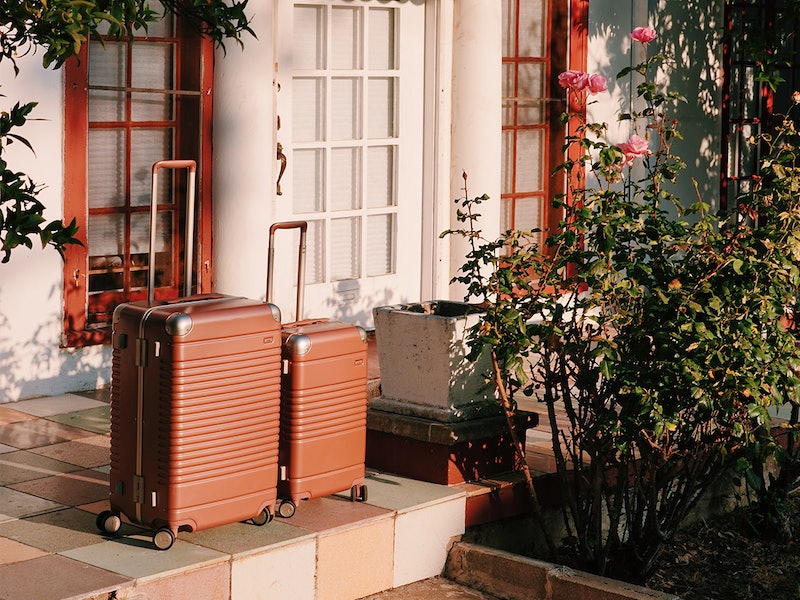 When it comes to airport travel, convenience is king. With the stress of long lines, security checks, and trying to find your gate in time while still getting to squeeze in a quick cocktail at the bar, your luggage needs to work for you, not against you. Which is what makes Arlo Skye's new Rose Gold collection so iconic. Not only is the luggage gorgeous and indestructible, but it will also make flying a lot less stressful with its add-ons and features.

Arlo Skye is a New York based luggage brand for the design-obsessed, and they recently have launched their limited-edition Rose Gold collection just in time for summer. “Rose Gold is all about celebrating summer — wherever it takes you. Whether you’re in Porto Fino or Ginza, this is the suitcase that’ll seamlessly fit into your life and your Instagram feed," Mayur Bhatnagar, the co-founder and CEO, shared in the press release.

The carry-on and suitcase is made out of lightweight polycarbonate shells that make the case unbreakable, along with aluminum frames and corners for added durability. Meaning you'll never see your suitcase scuffed and cracked coming towards you on the luggage conveyor belt, wrapped up in tape like a TSA apology. The shell also seals shut with no outer zippers, and both cases also have whisper-quiet wheels, so you won't feel like you're barreling down the terminal.

But probably the most exciting feature is that the carry-on comes with a charger with two fast-charging USB ports for your cellphone and laptop, meaning you'll never have to scavenger between airport chairs for an open outlet again. Just hook up your dying phone to your carry-on case, and your job is done.

Several airlines like American Airlines, United and Delta had issued new restrictions on battery-powered carry-ons, but this case meets those airline guidelines and will allow you to get onto the plane, worry-free.

The new restrictions say that a lithium battery charger needs to be removable if it's part of a bag, mainly because lithium batteries can cause fires. The loophole is that you can still carry it on to the cabin with you, as long as you pop the battery out. Why? Because while a fire still might start, flight attendants can contain it much easier if it happens in an overhead bin compartment, rather than the cargo hold underneath the plane.

So how does this new Arlo Skye carry-on differ from the rest with battery chargers? A lot of suitcases have their chargers tucked into the inside of the case, meaning you would have to sprawl out on the floor in your terminal, unzip the lining, and dig out the charger — which can be kind of stressful. Some suitcases even have their chargers screwed in and would require tools to take them out, which isn't exactly convenient when you're at your gate and your section is being called up. This carry-on has its charger embedded in the exterior, and you can just pop it out with one quick click of a button.

Their battery also has surge and short circuit protection, so it doesn't over-heat as often as others. The battery can last for days, has the capacity to charge your phone four to five times over, can charge android devices 75 percent faster than a conventional charger, and has a USB C port which can charge the latest MacBooks. And there's also an added benefit: "Suitcases that allow you to pop out the charger and bring it with you when you're out and about are the way to go. That way, if you're heading to the Met or the beach, just bring along the charger for extra power," the brand explains.

While it might be more expensive then most mid-range cases, if you're a frequent flier — either for work or for adventures — it will be worth the money. Not only is it streamlined and stylish, but it will last you hundreds of trips and won't wear out after a year or two. For example, being a freelancer I'm lucky enough to get to work anywhere in the world, and I often times travel for at least half the year. In the past I would go the thrifty route and get a $150 suitcase from TJ Maxx, but after the thousands of miles I've flown, taken trains across, walked, and rid buses in, I've already gone through three cases in three years. Add that together and I could have just bought one long-lasting, quality-made suitcase.

Everyone has their own budget, but if you're looking for a serious carry-on or check-in case, look no further then this innovative, limited-edition Rose Gold collection.