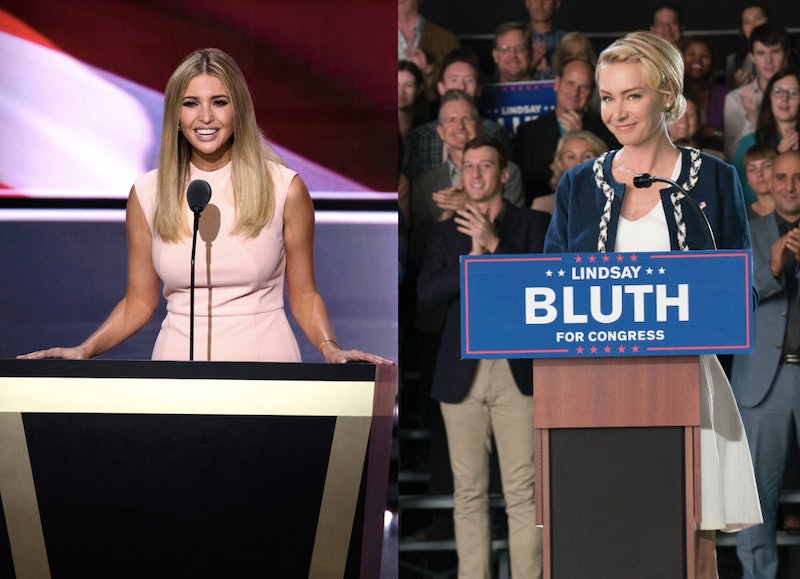 It's probably not a comparison to Trump family would agree with, but still. In an interview in The New York Times on Wednesday, the Arrested Development cast addressed comparisons between the Trump family and the show's Bluth family, saying they were maybe even a little too obvious at this point.

It's not hard to see why people make the comparisons. Both the Bluth family and and Trump family amassed enormous fortunes by way of their real estate-focused patriarchs, George Bluth Sr. in the former case and Donald Trump in the latter. Both of them include hugely visible, outsized personalities that are regularly embroiled in controversy ― like, say, Gob Bluth on the fictional side, and Donald Trump Jr. on the real-life side.

And in the show's critically panned fourth season, one member of the family, Lindsay, proposes building a border wall; she'll reportedly be running for Congress in the new season.

The points of comparison are a-plenty, and from the sounds of things the cast is painfully aware of that fact ― Jessica Walter, who plays Lucille Bluth, even called Lindsay the Ivanka Trump of the Arrested Development universe in the New York Times interview

"I think it may turn out to be slightly burdensome," actor-comedian David Cross said, suggesting that people might think the show tried to "shoehorn in" points of comparison to the Trump family, despite many of the most dramatic examples having been written and filmed six years ago.

"I think most people will get that," Cross continued. "But I think some people, no fault of their own, are just sort of lazy when they’re consuming entertainment and won’t make that connection. I tried to help it by aging dramatically between seasons."

Will Arnett, who plays Gob ― and since the show's fourth season has also picked up the acclaimed starring role in Netflix's animated hit Bojack Horseman ― also weighed in on the Trumps, arguing there really aren't a lot of funny things about them.

"There’s not a lot that’s actually really all that funny about the Trumps," Arnett said. "They’re not particularly funny in any way." His co-star Jason Bateman, who plays Michael, had a slight quibble.

Walter, for her part, said that series creator Mitch Hurwitz had to "scale back" on the family's similarities to the Trumps, and added that Melania was the only Trump she found "sort of" likable.

"I think Mitch had said he had to scale back on it a little. It’s too obvious now. And you know, it’s almost as if our family, just by themselves, are the Trumps," she observed. "You’ve got the two dysfunctional sons. You’ve got Portia as Ivanka. George and Lucille. Although Melania, no, I don’t think we could compare Melania — Melania is the only one who is sort of likable."

To be clear, the Trump comparisons are far from the only topic the cast ― minus Michael Cera and Portia de Rossi, who were not present for the interview ― addressed in the sit-down.

The conversation also turned serious when the cast talked about co-star Jeffrey Tambor's behavior. Tambor, who was fired from the show Transparent last year amid sexual misconduct allegations (he denies the allegations of sexual misbehavior), has admitted to verbally abusing some of his colleague, including Walters, who plays his on-screen wife in Arrested Development.

Walters actually stared crying at one point in the interview, while looking back on an unspecified time Tambor blew up at her on-set. She added that she felt she needed to "let it go," but that she'd never been treated that way in nearly 60 years as a performer.

If you're curious to watch the latest season of Arrested Development ― and its taken a whopping 15 years just to produce five seasons ― you won't have to wait much longer. The full run of episodes will be going live on Netflix starting on Tuesday, May 29.