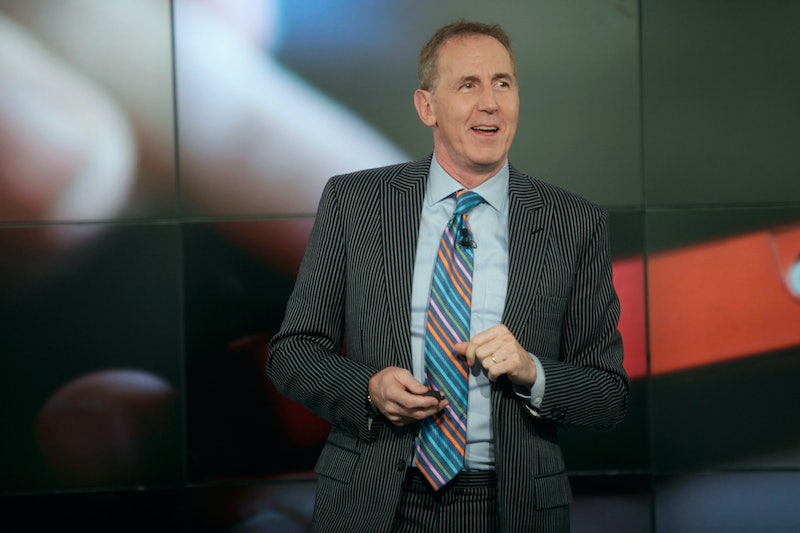 For years, the ghostwriter behind Donald Trump's 1987 memoir has made it clear that he regrets promoting the president's success in business. And now, in light of a New York Times report revealing that Trump's businesses were not as successful as the president claimed, Art of the Deal ghostwriter Tony Schwartz suggested renaming the book wouldn't be the worst idea.

In an interview with CNN's Anderson Cooper earlier this week, Schwartz suggested that if he had to rename The Art of the Deal, he would call it The Sociopath.

"I think that's a window into why he doesn't experience the kind of overwhelm of pressure and tension at the level you or I would, or most people would, because he has no conscience, he has no guilt," Schwartz told Cooper. "He does not experience the world in the way an ordinary human being would."

Schwartz also tweeted Wednesday that he would be perfectly fine with The Art of the Deal being pulled from print, or simple recategorized as fiction. Schwartz's comments this week came on the heels of a New York Times report indicating that Trump's businesses claimed more than $1 billion in losses during a 10-year period in the 1980s and 90s.

Trump was "running a personal Ponzi scheme through the time that I was working on the book," Schwartz told Cooper. "It didn't occur to me ... that this whole giant business was thoroughly rotten at the core."

But this isn't the only big story here, Schwartz argued. Schwartz told Cooper that he believes Trump completely made up the losses he claimed on his taxes, in an act of tax evasion.

"I think he did have very, very large losses, but I think he came from a family ... that was incredibly skilled at creating fake losses and otherwise avoiding taxes," Schwartz claimed. "His father did it, and he followed in his father's footsteps."

Schwartz appeared to be referring to a different New York Times report published last year, which outlined the ways in which Trump's father allegedly engaged in schemes to avoid or pay lower taxes. Schwartz also speculated that Trump possibly "never paid taxes during his adult life." Bustle has reached out to the White House for comment.

Although Schwartz ghostwrote The Art of the Deal, he has been a vocal critic of the president for years. In 2016, he told The New Yorker that he felt "a deep sense of remorse that [he] contributed to presenting Trump in a way that brought him wider attention and made him more appealing than he is.” The Art of the Deal mistakenly praised Trump's business dealings and capabilities, Schwartz argued.

“I put lipstick on a pig,” Schwartz said at the time. “I genuinely believe that if Trump wins and gets the nuclear codes there is an excellent possibility it will lead to the end of civilization.”

Trump did, of course, go on to win the presidency, and in the years since the election, Schwartz has doubled down on his criticism of the president.