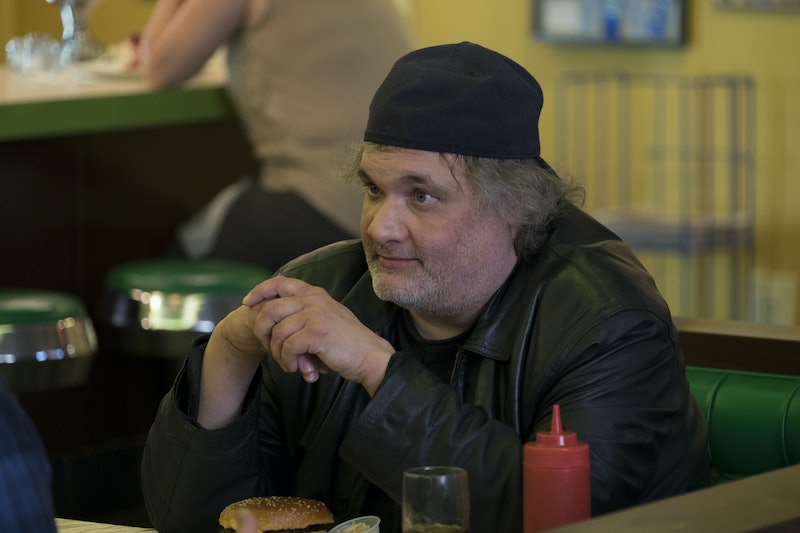 On Sunday, Feb. 19, HBO will unveil its latest comedic undertaking with Crashing. Created by veteran comic Pete Holmes and produced by the incomparable Judd Apatow, the series traces the travails of a young comedian named Pete (Holmes) whose life is upended when he catches his wife cheating on him. Unsurprisingly, the cast features a stacked roster of talent — Lauren Lapkus, Sarah Silverman, T.J. Miller — but for those who haven't been keeping up with the comedy circuit, you may be wondering, who is Artie Lange?

On Crashing, he plays himself, acting as a mentor to Pete. Off screen, he has deep roots in the entertainment industry. He got his start as a comic gigging across New York in the early '90s, going on to release two comedy albums, star in three stand-up specials, and publish two books — New York Times bestsellers Too Fat To Fish (2008) and Crash and Burn (2013). He's also a regular on radio, having hosted his own show from 2011 to 2014, and has appeared in numerous films and television series. Some of his credits include a two-year run on sketch series MadTV, cameos in Old School and Elf, and episodic stops in Entourage, Louie, and Inside Amy Schumer, among others.

But Lange is perhaps best known as Howard Stern's foul-mouthed sidekick on The Howard Stern Show, which he worked on for roughly a decade. He left the show around 2009, just before he went through a very dark period. As he recounted in a 2013 interview with Rolling Stone, Lange struggled with heroin addiction and attempted suicide in 2010. He spent the next 18 months in recovery, bouncing between psych wards and detox efforts. His second book, Crash and Burn, recounts his return from rock bottom.

In recent years, Lange has gotten his career back on track. He launched his own podcast, The Artie Quitter Podcast, in 2015, and has a third book due out in 2017, according to his Twitter. He still regularly performs stand-up, too, and is currently on tour with Holmes and Apatow in support of Crashing. Still, the series marks his first big TV role since 2001, when he starred as Artie Henderson on ABC sitcom The Norm Show.

If Lange is looking for a comeback, this isn't a bad place to start. Apatow has a lengthy track record in producing hits — Superbad, Step Brothers, Bridesmaids, to name a few — and HBO has become a stalwart when it comes to making buzzy original shows (Game of Thrones, Westworld, Veep, the list goes on). Plus, the two have proved a powerhouse duo (see: Girls), so add in a batch of freshly talented comics and Lange has hitched his wagon to a pretty surefire success. Catch him in action when Crashing premieres on Feb. 19.

More like this
The 'Kenan & Kel' Reunion On 'SNL' Took A Dramatic Turn, Thanks To Keke Palmer
By Brad Witter
The First Trailer For 'That '90s Show' Includes So Many Nods To The Original Series
By Jack Irvin, Alyssa Lapid and Grace Wehniainen
Is Blake Lively Or Penn Badgley The Richest 'Gossip Girl' Star From The OG Series?
By Hugh McIntyre
Theo James Revealed The Truth About His 'White Lotus' Nude Scene & Fans Can't Cope
By Stephanie Topacio Long
Get Even More From Bustle — Sign Up For The Newsletter