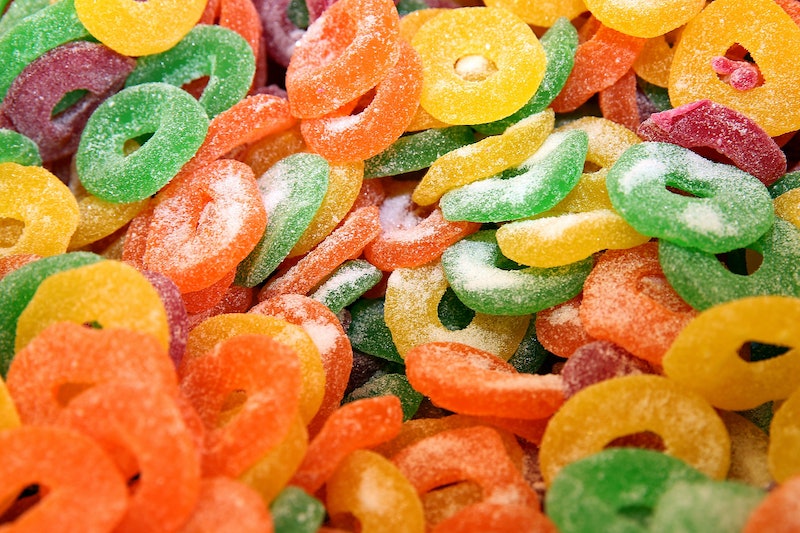 The best part of the Halloween season, if you're an adult, is arguably the preponderance of candy, but a new study published in Molecules shows that artificial sweeteners can be bad for your gut microbiome. Artificial sweeteners, like aspartame and saccharine, are found in many different foods and drinks, including desserts and candies, and are often much sweeter than sugar, so they only need to be used in tiny amounts to give a sweet hit. These artificial sweeteners have been associated with negative health outcomes like metabolic syndrome, though those links aren't super clear-cut. The new study, however, gives an insight into what those small amounts do to the gut microbiome — the internal ecosystem of bacteria that lives in your gut, which can potentially affect everything from immune response to your mood — and it's not actually great news.

Artificial sweeteners are used in the place of natural or fruit-derived sugars because they don't contain carbohydrates and have extremely low calorific values. However, the new research targeted something beside nutritional value: the complex array of bacteria that make up the digestive system's ecosystem. The gut microbiome, as it's called, is now thought to play a very strong role in our health, influencing everything from our mood to our immune systems. A lot of things shift its composition, from what we eat to stress and anxiety, but in many senses our understanding of it is still minimal.

For the first time, the scientists looked at how six different sweeteners — aspartame, sucralose (or Splenda), saccharine, neotame (or Newtame), advantame and acesulfame potassium-k (ace-k) — and 10 different sports supplements might affect gut bacteria. The research didn't use a human gut, though. The scientists identified a substitute: E. coli bacteria, which were redesigned to be bioluminescent and "glow" whenever they encountered a toxic substance. E.coli, in case you flinched when it was mentioned, is actually a family of bacteria; many strains of it live harmlessly in the gut and act as important parts of the microbiome. The strain that was made into a glowing lantern for the experiment was one of the harmless types, not the ones that cause infection and illness.

The theory behind the study? Exposing the bacteria to small levels of artificial sweetener and sports supplements would show how the gut microbiome might react as a whole. But the results weren't exactly positive. When the bacteria were exposed to relatively low measures of the artificial sweeteners — down to one mg per mL — they 'turned toxic', stopping healthy activity and slowing down their growth.

This simple experiment reveals several things about artificial sweeteners we still don't quite understand. Why do they make E.coli bacteria toxic? And how does the gut microbiome react to them as a whole? Tests have shown that every human has around 35,000 species of bacteria living in their gut, and they'll have their own reactions and counter-reactions to artificial sweeteners, too. So the study only reveals a very small piece of a large, complicated puzzle.

If you've been wondering if there's a connection between eating artificially sweetened things and any gut discomfort you're experiencing, it's fine to pass over Halloween candies that might contain them and see if that helps. However, people who can't have other sugars or are recommended artificial sweeteners by their doctors should note the fact that this is only a limited study and a lot of questions remain unanswered. For those of us who were looking forward to Halloween candy this year, though, don't feel like you can't enjoy it — in moderation, of course.