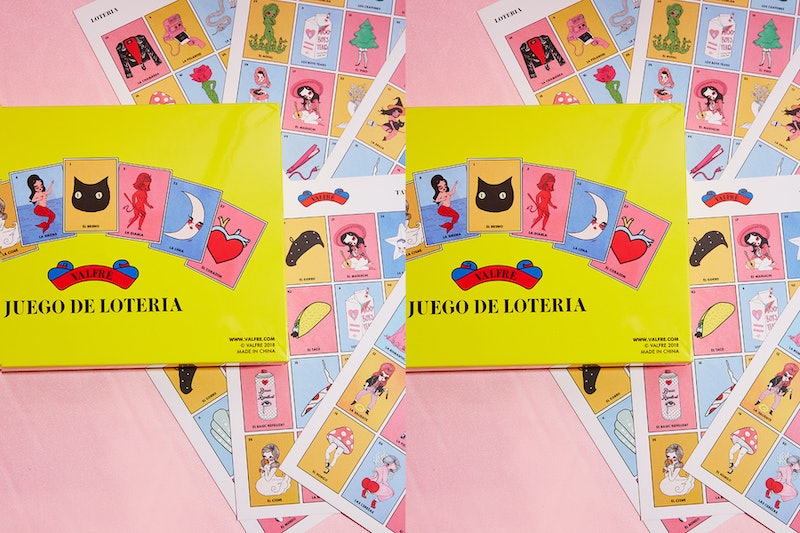 Lotería is a traditional game that has long been important in Mexican culture, but now, this beloved Mexican game is getting a 21st century update. Feminist brand Valfré has dropped a modern version of Lotería with original artwork that you'll want to buy immediately. Valfré, founded by Mexican-born artist Ilse Valfré, was first launched in 2013, and has become a hit on social media and beyond ever since. The brand is known for the eccentric, whimsical, and pinup-like cartoon female characters that often find themselves in all-too-relatable, IRL situations. In a 2017 interview with Observer, Valfré explained that she "focuses on using her work to help encourage and empower young females."

Valfré's signature characters adorn a number of products — everything from crop tops and bags, to pins and postcards. But now, these characters are putting a unique spin on your fave classic game: Lotería. Affectionately dubbed "Mexican bingo" by some people, the website Vivala explains the origins of Lotería date back to 15th century Italy, but the modern version of this game came to Mexico in 1779. Lotería is somewhat similar to the bingo you almost certainly have played at least once in your life if you live in the U.S. However, instead of just using plain old bingo boards with corresponding numbers and letters, Lotería boards have an array of gorgeous illustrations of everyday objects and items.

Valfré said that her inspiration to create her own Lotería deck was inspired by her own childhood love of the game. "Lotería is a super popular game to play in all Mexican households," she explained in an interview with Elite Daily. "I've played at birthday parties, school events, etc. My earliest memory was in kindergarten, and I remember I was so excited because I won the first round, and the prize was a lollipop."

Even if you're not super familiar with Lotería, you'd still probably recognize some of the iconic images from Lotería decks (especially from the Don Clemente version) — including "el corazon," "la sirena," and "la rosa." While Valfré opted to include some of her own versions of classic Lotería cards, the Latinx artist spiced up the 56-card deck with her own feminist characters and modern day items. For instance, the Valfré Lotería set features dry shampoo, pizza, a polaroid camera, "la space babe," and yes, even a carton full of "boy tears."

There's no denying but Valfré's version of Lotería is cute AF, but it's so much more than that: It is helping to carry on a centuries-old game that is and has been an important piece of Mexican culture. "I don't know if I've shaped [Mexican culture for the mainstream], though I hope I've helped bring it into the mainstream," Valfré told Elite Daily. "Mexican culture has definitely shaped me as a creative. It has influenced the way I use color and humor in my work, and I am very proud of that."

The Valfré Lotería game comes with 56 cards, 8 playing boards, and 80 markers for $30. This set is limited edition, so be sure to snag this modern Lotería before they're gone.