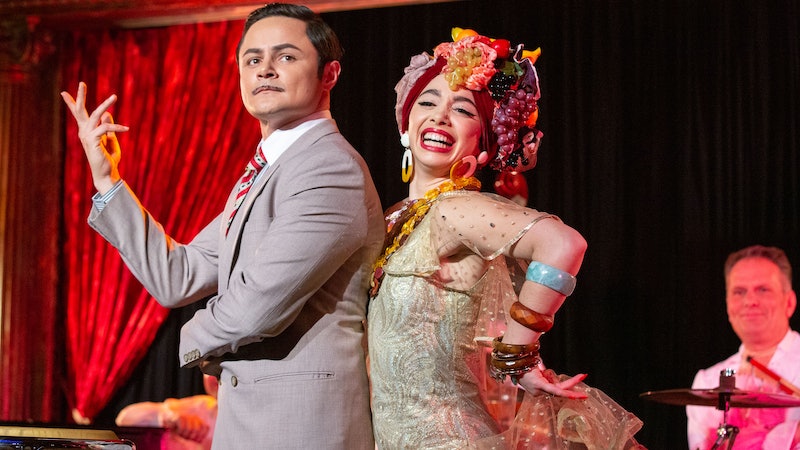 If you like comedy that makes you laugh and think, Arturo Castro's new sketch show, Alternatino, will be a delight. Though the series is largely a vehicle for showing off Castro's comedic chops (and star power), it also skewers Latinx stereotypes and lends needed representation to TV — both things that were important for Castro, who was never able to see himself reflected back onscreen.

"This show is a love letter to my upbringing, of having grown up in Guatemala and then having grown up as an adult in New York," Castro told Uproxx. "Growing up, I didn't see anybody on television that I could relate to, they were all just broad types. So for the Latinx people out there, that, you know, don't really like spicy food, and they're pretty bad at soccer. There's a place for you here."

One of the many, many characters Castro plays in Alternatino is a fictionalized version of himself. In Episode 1 (which is currently available on YouTube), Castro goes on a date with a white woman who clearly fetishizes Latin men. He decides to debase himself by acting like more of a stereotype to impress her, which includes going to a dance club and exaggerating his Spanish accent. Throughout the series, Castro also portrays a variety of guys on dating apps, an unhappily single woman named Jecca, a Luis Fonsi-like singer, and dozens more.

However, this isn't the first iteration of Castro's sketch comedy show. Alternatino started as a Comedy Central web series that first premiered in 2015. So before you watch, here are some of the best sketches from the original show.

This hilarious sketch depicts a 60 Minutes-like show dissecting one of the first phrases that students learn in Spanish class: ¿Dónde está la biblioteca? (Community fans, anyone?) Here, no one seems to know the answer except Spanish speaker Mrs. Lopez, who is involved in some big library conspiracy that Castro's character (host Walter Odina) is determined to get to the bottom of. Pitch Perfect and Dear Evan Hansen star Ben Platt also appears.

Castro plays late night host Diego Luca, who brings a deranged energy to Latin talk show Buenas Noches. One of the segments, "Singing on Motorcycles in Traffic," is a clear spoof of James Corden's "Carpool Karaoke" and briefly depicts Luca and "Daniel Day-Lewis" incoherently singing while wearing bike helmets. Their guest is Kevin the IT guy (Brendan Fitzgibbons), a white man who Luca makes fun of. "You are different from me, and that is funny to us!" Castro's character exclaims, laughing.

This sketch stars Castro, SNL writer Bowen Yang, and the late comedian Kevin Barnett, among others, as a group of friends having brunch. They take turns swapping stories about how their significant others are "borderline racist," when they're really being debased and fetishized by their white girlfriends. One by one, however, they make lame excuses for why they're going to stay in the relationships, like the fact that one woman has a washing machine in her apartment, while another makes great pancakes.

Castro plays a lonely employee who decides to download the Telemundo app during his lunch hour and is immediately transformed into a dramatic, telenovela-like star. However, he soon realizes the app was a mistake and is unable to escape from high-drama stakes like surprise pregnancies, amnesia, murder, and mysterious biological fathers.

Fitzgibbons and Castro play two men recording voiceovers in English and Spanish, respectively. While Fitzgibbons's character keeps getting notes to tone down his delivery, the producer can't get enough of Castro's dramatic, exaggerated Spanish.

In a 2015 sketch, Castro's character accidentally takes the lord's name in vain in front of his horrified mother. As punishment, his mother calls over his aunts, who proceed to put him at the center of an "emotional blackmail circle." However, the real icing on the cake is when his grandmother is solemnly rolled in toward the end of the sketch. She forgives Castro... until she finds out he's a vegan and can't eat her casserole.