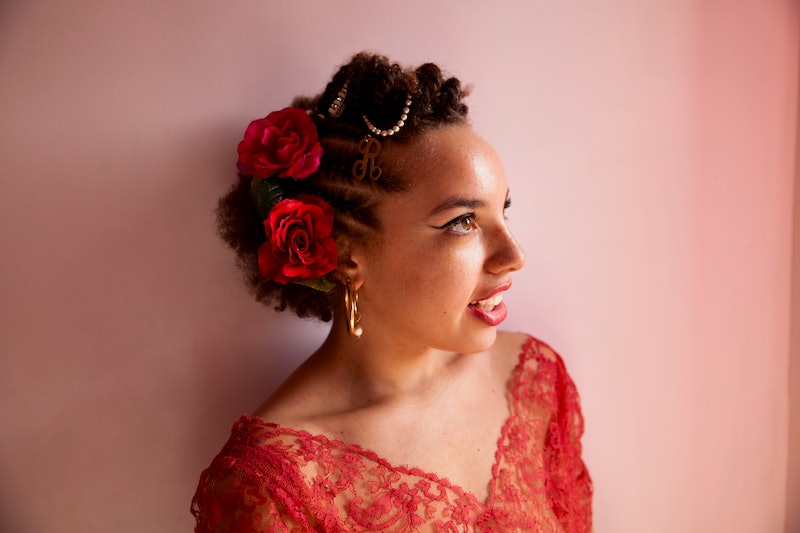 As I looked in the mirror from my salon chair on a recent February afternoon, peeking through the two-strand twists caressing my forehead, I didn’t recognize the woman glancing back at me. I had just gotten braids for the first time in my life at age 29, a confection of cornrows and twists atop my natural Afro. It truly felt like a rite of passage for me as a biracial girl with 4C hair.

My mecca of choice to get my tresses braided was Hair by Susy, an unassuming salon in Brooklyn, New York, where owner Susan Oludele transforms black hair into sculptural art for celebs like Solange and people from the local community alike. In this melanin sanctuary, music from Nigeria created a flawless backdrop for the black women working to beautify other black women, who were perched on throne-like salon chairs. Here, we treated ourselves to a longstanding ritual of esthetic regality — a ritual very different from the one I was used to.

Before this moment, for nearly three decades, I had exclusively donned my hair in one of two ways: straight while I had a perm, or in an Afro after going natural when I was 21. Those styles were a perfect reflection of the cultural dichotomy I’ve been navigating since I was born.

My mother, who is white, always tells me that I came into this world "all curls and lashes," and has admitted that she struggled to deal with my hair when I was a child. In 1990, there was no “Black Hair for White Moms” manual that could help my fine-haired, blonde mother tame her biracial baby’s kinky-headed crown. On top of that, my black father is an only child, so I had no afro-slaying aunties to lend a helping pick.

As a toddler, I ran around the house like a naked hellion, with my natural hair flowing in whatever direction it wanted to flow in that day. My mama would chase me with a comb, as I screamed down the halls, not wanting to get my hair done. Eventually, to save time, my mother took me to get a pixie cut at 6 years old, rather than a perm. She believed my hair was simply easier to take care of in its natural state if it was shorter. She also wanted to keep me away from not only the chemical toxicity of hair relaxers, but also the potential damage it could cause to my scalp.

I was mostly fine with wearing short hair as a little girl. My mom would jazz up my look with hair accessories every day to make me feel cute. But all it took was a single bad instance in elementary school to change how I felt about my hair — a feeling that would stick around for more than a decade.

In the third grade during ukelele class, I asked a boy — who was also biracial and, himself, had a Rapunzel-like braid — where the bathroom was. In response, he pointed to the boy’s room, shouting, "You look like a boy." That day, I cried myself all the way home, thinking that if my colorful barrettes couldn’t feminize my 8-year-old self, I'd have to do something about my hair.

To add to that scenario, like many little girls, I derived my perception of beauty from Disney princess films, Barbies, and Teen Vogue magazine, where all I saw was a fair-skinned, silken-haired formula for perfection. In hindsight, I realize all my friends growing up had straight hair. I was conditioned, in my impressionable young mind, to believe that I did not fit the societal mold of pretty, because I never saw anyone who looked like me being described as such.

So, a few weeks after the ukulele class incident, I convinced my parents — despite my mother's initial hesitation — to make the financial sacrifice to take me to get a relaxer. And I continued for the next 12 years, heading back to the salon for a touch-up every six weeks.

The first time I went to the salon, the experience was excruciating. It took three stylists three hours of slathering my sobbing head with chemicals to rewire my curls to straightened tresses. But once they spun the chair around, I thought it was all worth it. I finally saw a girl in the mirror with Barbie-like hair who looked like everyone else I admired in the pages of my magazines. I felt like I could be a princess in my own fairytale.

For years, I embraced my straightened mane. But as I blossomed further into pubescence, my decision to perm my hair came with other sacrifices. My love of swimming was superseded by avoiding chlorine pools like the plague. Rain also became my worst enemy. Even going to pre-teen summer camps, where I'd have to potentially get my freshly relaxed tresses wet, gave me anxiety — all in fear of ruining my hair.

Beyond that, as I grew older, while the privileges of being light-skinned and traditionally pretty manifested quickly, I started to feel as though I was being punished by my peers for having straight hair. My efforts to replicate the looks I saw in magazines, coupled with the fact that I am half white, had many of the other kids in my classes believing I wasn't "black enough."

In middle school, kids would call me an “inside-out Oreo," which meant they thought I was white on the outside, black on the inside. Even my eighth grade African-American student club debated on "which one I was." I was constantly asked by those around me to choose between races, all while being told that because I wore my hair straight, I was picking my white side.

But at the same time, all the black celebs I grew up with — like Tyra Banks, Beyoncé, and Aaliyah — all had straight hair, too. So, I just didn't get why I was being singled out, and taunted, for wearing my hair straight.

It wasn’t until I went to college at Tufts University that I would return to my roots. On my first day, as I saw undergrads two-step, beatbox, and double-dutch outside The Africana Center on orientation day, I caught a glimpse of a joyous world I’d never known. Still, because of my experiences in middle school, I felt ultimately undeserving of joining. Instead, I got involved with the French club on campus, which led me to spend my junior year in Paris.

Ironically, it was in the French capital that my newfound black and North African friends who lived in the city led me to once again love and embrace my natural hair. I was inspired by their radiant, confident Parisienne cool, and the way they wore their beautiful, coily hair so freely. It motivated me to officially start my transition back to natural. But my journey to je ne sais quoi was quite the spectacle, as the frizzy kinks re-emerged under my straightened, damaged tresses. By the end of the first year of my transition, it took nearly 30 bobby pins a day to control the voluminous confection protruding from my scalp.

Then, upon my return to America, it was back to the salon chair I went at 21 — a place I only used to visit when I was getting a relaxer. I was ready to cut off all the chemical falsity to let my natural hair reign. When my stylist finished my big chop, I saw yet another unrecognizable reflection in the mirror. My hair was no longer long and straight; I now had a TWA (teenie weenie Afro) with shrunken 4C coils atop my head. I didn't know how to feel at first, and it admittedly took a few weeks to internalize my new look. But as I weaved my hands through my natural curls that I had not touched in decades, I mentally unpacked my entire adolescence, and began the journey of learning how to take care of my texture on my own.

Today, I must say that my journey back to natural was all worth it, because no words can articulate just how much I love my Afro. I love the unspoken joy I now get to share with other natural-haired black women I meet in Brooklyn. I love how easily identifiable I've become to friends because of my hair (though it is frustratingly impossible to be incognito). I love the multi-textural personality of each curl, and how the coils at my nape are decidedly different than the frizzy wilderness at my crown. I love my hair's cultural and historical significance, the way it frames my face, and the way it amplifies my '70s-inspired style. The confidence my hair gives me is unmatched.

Until coming to Hair by Susy, because I had done my hair on my own since my big chop, I had forgotten all about the soulful catharsis of the black hair salon. But this time, it was a complete contrast to what I now think of as oppressive torture, back when I was getting a relaxer. This experience was an act of self-love that let me relish in the wonders of black joy.

The end result of my time with Oludele was an alluring trifecta of traditional black styles — a masterpiece of cornrows, two-strand twists, and my 'fro left out at the ends, with my grandmother’s pearls and mother’s jewels interweaved into my 'do. She was able to unearth a wonderland of possibility by using just my natural hair, proving that these strands I once despised are truly magical.

More like this
Ayurvedic Principles & Family Are At The Root Of Fable & Mane
By Justine Knight
The 9 Chicest Celebrity Bob Haircuts Of 2022
By Olivia Rose Ferreiro
The 8 Coolest Haircut Trends Of 2023
By Audrey Noble
How To Put In Hair Tinsel, The Latest Y2K Trend Making A Comeback
By Olivia Rose Ferreiro
Get Even More From Bustle — Sign Up For The Newsletter