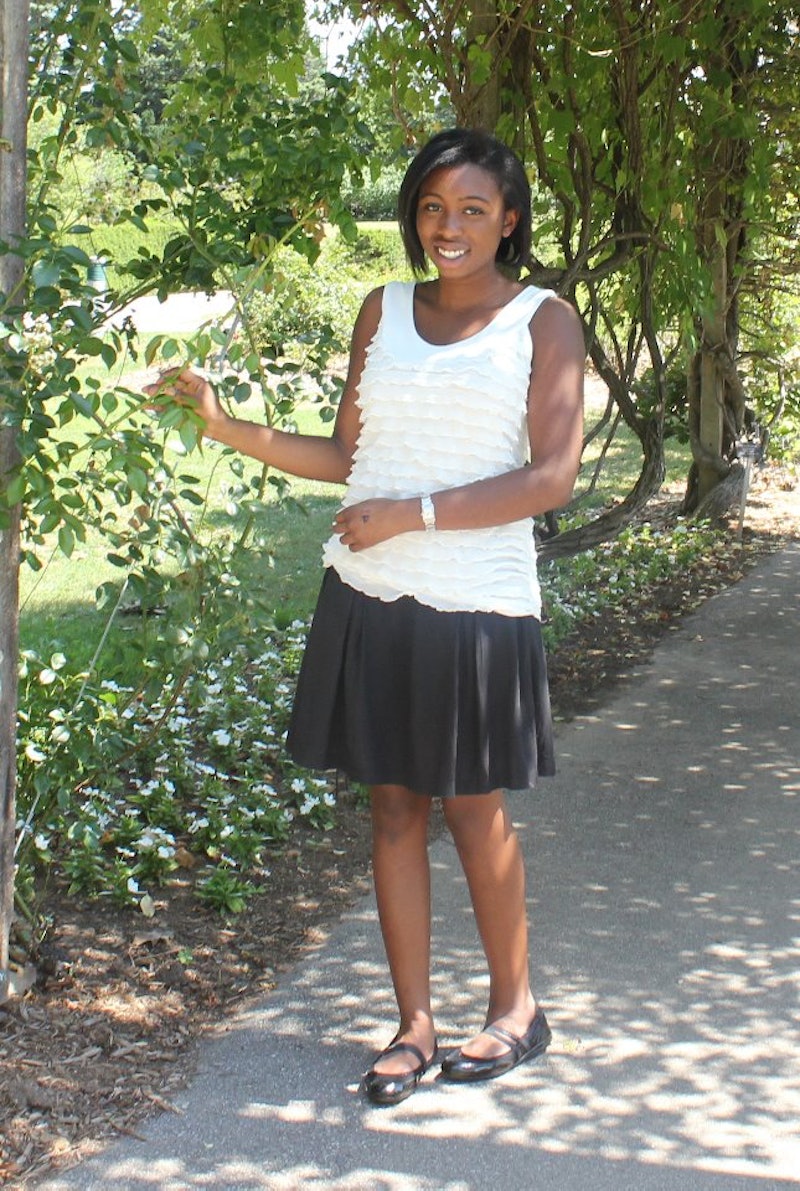 I was in grade school the first time my parents told me, "you'll have to work twice as hard to get half as far." Everybody who grows up black knows this saying — a reminder that because of my skin color, opportunities would not just fall in my lap the way they would with some of my white classmates. At that age, I was already dreaming of my future: I wanted to leave my suburban Canadian town for New York City, and become one of those fancy fashion editors who also wrote movie scripts on the side. I just wanted to be able to reach my full potential.

But both popular culture and many of my peers sometimes made those dreams seem unattainable. That’s how I first absorbed the message that, as a black woman, I couldn’t afford to fail.

In the media I watched growing up, black girls were usually background characters. We were the hypersexualized backup dancers in male artist’s music videos, or the side character, like Stacey Dash in Clueless, who could be a part of the movie but not the star. Often, films, TV shows, and other media I encountered sent the message that black girls were hypersexual, dramatic, uncouth and usually not book smart — black girls were there to entertain, yet not be truly seen.

Some of my white classmates bought into these stereotypes, too, telling me that real black girls weren’t supposed to like reading and playing the piano (unfortunately for them, I did both). In grade school, I was a good kid, the “loser” who loved school, never raised my voice, followed teachers’ directions, and always did my homework. And my peers at my predominantly white private school found this troubling. “You’re so good,” other students would say, like they had a bad taste in their mouth. I always thought, “Isn’t that a good thing?” When I finally asked my mom about it, she patiently explained to me what stereotypes were.

So I simply carried on, looking forward to a brighter future. Whenever a kid on the playground would try to demolish my sense of self-worth, my mom would encourage me, saying that I was a “barrier-breaker,” pushing past the parameters people would try to place around what I could achieve as a young black girl. But I was often left wondering why I had to face barriers in the first place.

I also felt driven by my parents’ background. When you’re the child of immigrants, you never ever forget where you come from — and if it ever looks like you’re starting to forget, your parents will quickly remind you by telling you their childhood stories.

My parents attended low-quality elementary schools in Jamaica, where it can be a struggle for children in poverty to pass the rigorous high school entrance exams. As a kid, my dad got a scholarship to attend an all-boys high school, the only thing that made it possible for him to complete his education. Later, after both of my parents were in Canada, they each worked back-breaking jobs to pay their way through university. I’m pretty sure both of my parents would’ve gone on to graduate school, if they had had the money. But they didn’t. Instead, they passed that dream on to me.

Often, first-generation kids are the physical vessels that embody the hope of being able to attain a better life. This was true in my case. My parents decided all my schooling would be paid for. Unlike them, I could go all the way.

Because of all of that, too, I felt like I couldn’t afford to fail and squander that opportunity.

I thought, “This is it. I’m not cut out for this kind of career.” I’m good, but not twice as good.

As time went on, I was partially fueled by the need to disprove those stereotypes my classmates had held. For me, getting good grades in school showed that I had something to offer, that I could be celebrated for my thoughts and my work, that I could get people to prioritize what I have to say over what I look like.

These feelings were fuel — but sometimes, they also created unnecessary fear and pain.

When I was in graduate school, doing my master’s in journalism, I received multiple bad critiques in writing workshops. I didn’t realize at the time that this kind of feedback is essential for a writer’s career. Instead, I feared I wasn't working hard enough, and was ready to give up hope.

At the time, I wanted to be a fashion editor, and there were fewer than a handful of black fashion editors in the publishing industry. I was sitting alone in my apartment when I thought, “This is it. I’m not cut out for this kind of career.” I’m good, but not twice as good.

I was probably halfway to picking up the phone to dial home, when a little voice appeared in my head saying how dare you! Who do you think you are? You can’t afford to fail!

The voice continued: Your dad didn’t work 12 hours a day, never being able to eat dinner with his family unless it was the weekend, so that you could fail. Your grandpa came to Canada as an undocumented immigrant, alone and scared. We’ve come too far to drop out or fail.

I bet there were times when some of my white peers felt equally discouraged; graduate school is a challenging feat for anyone to pull off. But the reality is that the stakes were higher for me. If one of my white peers had dropped out, no one was going to think about how badly that reflected on the white community. But I knew that if I left, there were some people who would say that there’s not a lot of black women in graduate school because they lacked ambition, or couldn’t apply themselves, or that black people are lazy and burdening the welfare system (which is factually untrue). My decision to stay in school became about much more than just my own career and future.

As a young adult, I’ve started to see this fear manifest in the black women and girls I know. Even as we continue to gain honors degrees, admission into prestigious graduate schools, and good junior positions at big companies, it feels like every achievement is quickly followed by an ever-present imposter syndrome, the constant feeling that in every situation, we need to be not just good, but excellent.

For as long as I can remember, I’ve subconsciously associated "success" with things like having a nice condo, a fancy-yet-cool job, a significant other. Because of all of this, I undervalued my real accomplishments for a long time. Often, the lows I’ve experienced in this career were self-created, a persistent feeling of “not being good enough” because I don't have money or a fancy office — despite the fact that I had gotten bylines in dream publications.

But after finally re-committing to going freelance last year and starting my own business, I’m beginning to pick up on the cracks in this theory. I've seen the limits of having your sense of self-worth tied to materialistic things, or choices that are impermanent. I've participated in conversations around access, class and privilege that made me realize that my previous definition of success excluded black women who didn’t have access to the many, many privileges that I had, like private school, parents who paid for university, etc. I've come to understand that the measure of a woman isn’t what she’s attained, but rather the kind of person she is, and particularly how she uses her privileges to uplift others.

And I've begun to understand that failure is often a prerequisite for success. What I always love about hero/adventure narratives is that the protagonist must set out on a quest, and usually fail once (if not multiple times) before they fulfill their ultimate purpose.

The fear of failure that black women have is valid; it's a result of very real structural disadvantages. But when black women are told to fear failure, they are denied the necessary experimentation that is required to realize one’s full potential. I would be lying if I said that I still don’t fear failure. But now I know it’s not just something to fear; it can also be the key to unlocking one’s purpose.