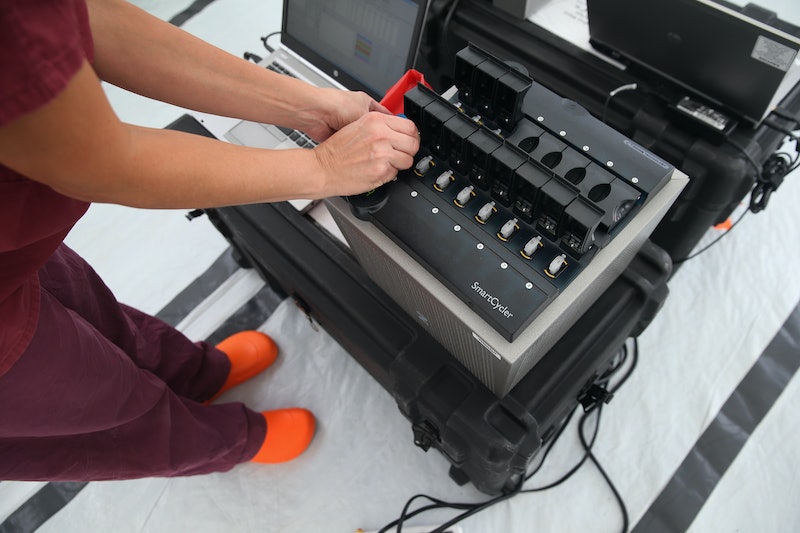 After much anticipation, speculation, and posturing, the White House sent the 2018 budget to Congress on Tuesday. Titled, "A New Foundation for America's Greatness," the president seeks to reduce $3.6 trillion in spending over the next 10 years, and within the deep recesses of the budget, there are lines detailing what will happen to the funding of federal scientific agencies. As a former scientist, I worry about the future of research and how it will impact our nation as a whole.

The Department of Health and Human Services' budget will be reduced over 16 percent, almost $13 billion. The Environmental Protection Agency, already a popular target for the Trump administration, was slashed a whopping 31 percent. These weren't the only pro-science targets: The National Institutes of Health (NIH) lost nearly $6 billion, the National Science Foundation $776 million, and the Centers for Disease Control and Prevention (CDC) $1.2 billion. That's only the beginning of the cuts to the science budget.

The White House doesn't see these reductions as problematic. During a briefing on Tuesday, Mick Mulvaney, the director of the Office of Management and Budget, said, "Does it mean that we are anti-science? Absolutely not."

But slashing billions of dollars from research funding sure seems anti-science, despite the budget trying to say otherwise:

The Budget institutes policies to ensure that Federal resources maximally support the highest priority biomedical science by reducing reimbursement of indirect costs ... and implementing changes to the National Institutes of Heath's (NIH) structure to improve efficiencies in the research enterprise.

Without scientists on the Trump administration's staff, the administration probably doesn't know what is and isn't efficient and what "indirect" or "direct" research costs are. The seemingly arbitrary nature of the impending cuts is deeply troubling, and decreased funding for the sciences should concern every person in the United States, even if it seems like the cuts most directly affect scientists.

Contrary to what some might believe, the money used to fund science doesn't go directly into the scientists' pockets, but to covering the cost of their research. While this can include their salaries and those of the individuals in their labs, the bulk of it covers the everyday costs of research materials. These can range from hundreds of dollars for a few grams of an antidote to tens of thousands of dollars for new equipment.

This money is therefore absolutely necessary for the research itself to get done. Indeed, the universities that house many of these labs do not usually have huge internal grants; principal investigators (PIs), which are PhD-level scientists who run the labs, are expected to come up with funding of their own. Most turn to the federal government for the majority of it. The NIH alone used $32 million for grant and trainee funding in 2016. The Department of Energy funded over 300 labs in 2016 and is slated to lose $900 million of its $5 billion budget.

When I was a research technician, my PI told me that when she began her career, getting funding was a matter of writing a good grant backed by reasonable prior evidence, with a sound hypothesis and experimental plan. Years later, in 2015, despite being the head of her department with numerous accolades in her field, she wasn't even guaranteed renewals of grants she'd received before. She told me that most labs had to have at least preliminary data to prove that their idea was sound, thereby reassuring the government that their money would not be spent on failed experiments.

Scientists have been fighting for research funding for a long time, and the result is that the general public has fewer answers to scientific questions, fewer results because of labs being shuttered, and decreased health outcomes compared to what might have been if the funding situation were better. So, yes, even the everyday person should be concerned with the proposed budget.

In an official statement, the Association of American Universities argued that these cuts will have grave effects on public health, the economy, and even national security. John Auerbach, president and CEO of the Trust for America's Health, told NPR that the cuts "would be perilous for the health of the American people."

Former CDC director Tom Frieden agreed and tweeted that slashing the CDC budget would risk Americans' health and safety. He included a detailed list of how that would happen, saying there will be more deaths due to factors such as HIV and cancer. This makes sense, with $1 billion cut from the National Cancer Institute's budget alone, making it difficult to produce and test new drugs. With summer looming overhead, public health officials also worry that the lack of research to the developmental effects of Zika means more babies will be born with birth defects.

Scientific research is supposed to be a quest for knowledge to aid human advancement. Instead, funding dictates the kind of research that is produced. The cuts mean that potential therapies, causes of diseases, mechanisms of action, drug development, and even fundamental, basic research are all left to the wayside in favor of what will receive funding.

Scientific funding must be a priority, if only because everyone's health is on the line. Reducing the scientific budget means the country might not be able to respond to the next Ebola or some other new outbreak. That should scare everyone.

More like this
Michigan’s Governor Is “Going To Fight Like Hell” To Protect Abortion Access
By Andrea Zelinski
10 Times Diana & Meghan Spoke Similarly On The Royal Family
By Sophie McEvoy
How The City Healed Five Years On From The Manchester Arena Attack
By Ella Glover
What Dreams About Being Lost Mean, According To Experts
By Carolyn Steber
Get Even More From Bustle — Sign Up For The Newsletter