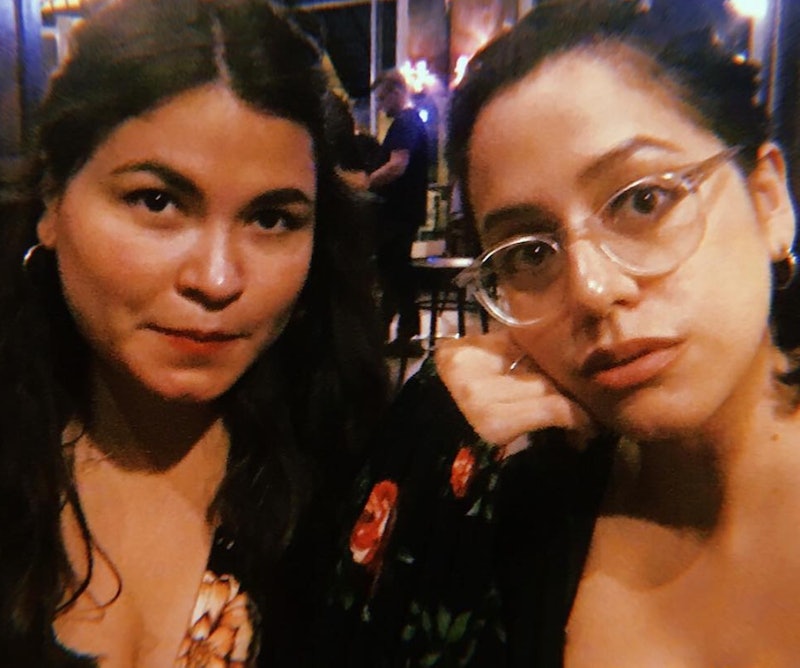 I flinched. I didn’t realize I had, but I did. My mother-in-law was offering me a gift: Gold hoop earrings. They were gorgeous, but I didn’t think so in the moment. At that point, I hadn’t worn hoops in years. Seeing them brought back a flood of associations and memories about about my community, my position in society, and who I am as a Latina woman.

I grew up in Queens, New York, the daughter of a single Colombian mother. My brother and I grew up knowing two things: We weren’t as well off as the other kids, and that my mother was una mujer fuerte — a strong woman. She was left to raise her kids alone in a city where, as young Latinos, we were very likely to end up falling into the wrong crowd. She instilled in us the value of hard work, the importance of family, and above all, the importance of dressing well.

“People make snap judgements,” she would say. “Never let anyone think you are less than them. When they look at you, you want them to see you as a person. Not your poverty. And definitely not the fact that you are a minority struggling in this world.”

And so, with her modest means, my mother always made sure we were well-dressed. She took pleasure in dressing me up throughout my childhood, in hand-me-downs or hand-made clothes my grandmother and aunt confectioned back in Colombia. I grew up wearing dresses, blouses, skirts, and headbands that were as colorful and loud and in-your-face as our culture.

I also wore tiny gold hoop earrings throughout most of my childhood. Like many Latinas, I got my ears pierced shortly after I was born. To my community, it was the beginnings of my femininity. I was the youngest girl in the family, and thus subject to living up to Latin-American expectations on feminine culture, that is, dressing “lady-like” and, never, ever leaving the house without earrings.

“At least put on some earrings mijita. When I was growing up, I could have been close to dying in bed with a terrible flu. But no one could get me to take off my earrings. You always want to look good,” my mother would say to me, laughing every time I got sick and couldn’t be bothered to get dressed.

My mother came to New York in the '80s, fresh-faced and seeking adventure. She learned English, started working in a sweatshop, and worked her way from administrative job to administrative job. After many years, she became an American citizen, got married, and had kids.

Her experience as an immigrant in the U.S. is a common one, one tied to her status as a minority, and how the barriers of language defined her place in society. She would always be a secretary, never the boss. Her accent would be the butt of office jokes. And, in the eyes of many, she would always be considered an illegal immigrant, regardless of her very legal immigration journey and subsequent citizenship. She suffered through years of people making comments about her accent and those that referred to drug cartels when they found out she was Colombian.

When we’d want to dress down a little, she’d say, “Why make it easier for them to think negatively when they first look at you?”

Her logic about appearances, including her insistence upon things like hoop earrings, was informed by all of the prejudices she’d experienced firsthand toward Latin-American immigrants in American society. For my mother, presenting her daughter as a well-dressed feminine little girl was important, and my tiny gold hoops were a large part of that. They were ornaments of beauty and femininity, to be added without fail. But trends change, and so did hoops.

In the late '90s and early 2000s, hoop earrings became more popular in the United States. Largely driven by hip-hop culture, giant gold loops were the accessory for young women in Latino communities. I remember seeing the trend explode with my idols at the time: Beyonce, Christina Aguilera, and of course, J Lo. When they wore them, they were the bling of celebrity; shiny and new, an object of desire for young girls looking to emulate that beauty.

For non-celebrity Latina women and girls, however, these earrings were more than just a fashion statement: They were a source of both pride and division within our communities. In my middle school, the girls who wore big hoop earrings were tough, and often believed to be associated with gangs. This was sometimes true and sometimes not, though as my mother warned, school administrators were not Latinos and therefore were prone to making grand assumptions based on how Latinos dressed.

As a result, as a teenager, my mother banned me from wearing the hoops she had encouraged me to wear as a kid. For her, those hoops had become the difference between someone thinking I was associated with Colombian drug cartels and thinking I was just a regular kid. She'd seen the kinds of looks girls would get when they wore those big hoops. They were othered, and seen as trashy or classless. She didn't want me to experience that feeling. And though they remained a symbol of femininity for her, she rejected them for the negativity they attracted, especially for young Latina girls in the U.S. In the years that followed, I internalized this, the feeling that they had so much power — the kind of thing that signified who you were before you even opened your mouth.

At the same time, I felt a kind of uneasy about not wearing them. They were so representative of being Latina, so synonymous with who I am, that rejecting them was like rejecting a part of myself. Yes, I didn't want to be seen as the loud Latina with the big hoops. But being the loud Latinas with hoops was also what made us stand out. When I chose not to wear them, I was actively deciding to hide that part of me.

I was at an age when I was discovering who I was, and looking to create a sense of style. An introvert at heart, I wanted to be the quiet nerd who blended in with everyone else. And so that became my style: Nothing too flashy or shiny, or too tight. I wore a lot of neutral colors and, my earring of choice for many years was a pair of pearl earrings. I had a few Latina friends who felt similarly. Together, we turned away from that part of ourselves to remain discrete, to blend in.

In the end, I chose to reject them entirely. In fact, up until recently, I never even wanted to have a pair. I found my own personal sense of style without them, and became an adult without ever really thinking about the effect those choices had had on me and the woman I became.

These were the thoughts that flooded my mind when my French mother-in-law tried giving me the earrings. At the time, I explained (with great difficulty) that the earrings had a very particular meaning to me and to others, and that I would prefer not to wear them. In the end she chalked it up to cultural differences and decided to refrain from offering me hoops in the future.

That was three years ago.

A lot has happened since then. Almost a year and a half into a presidency that openly criticizes the Latino community, I've witnessed a real change in the way my fellow Latinas present our experience and culture. Mine and my mother's trouble with hoops has always been a fear of prejudice, a fear of presenting ourselves fully and unfiltered as Latinas in the U.S. Now, it feels more important to embrace our identity than ever, including the things we've always worn, for better or worse. Hoops have become a symbol of beauty, femininity, power and now, pride.

I went shopping with my mother recently, and we'd been talking about hoops and the meaning they carried for us over the years as Latinas. They're trending now so we saw them everywhere. I remember we both admired a gold pair on sale.

She looked at me and said, "Why not?"

I bought them and never looked back.