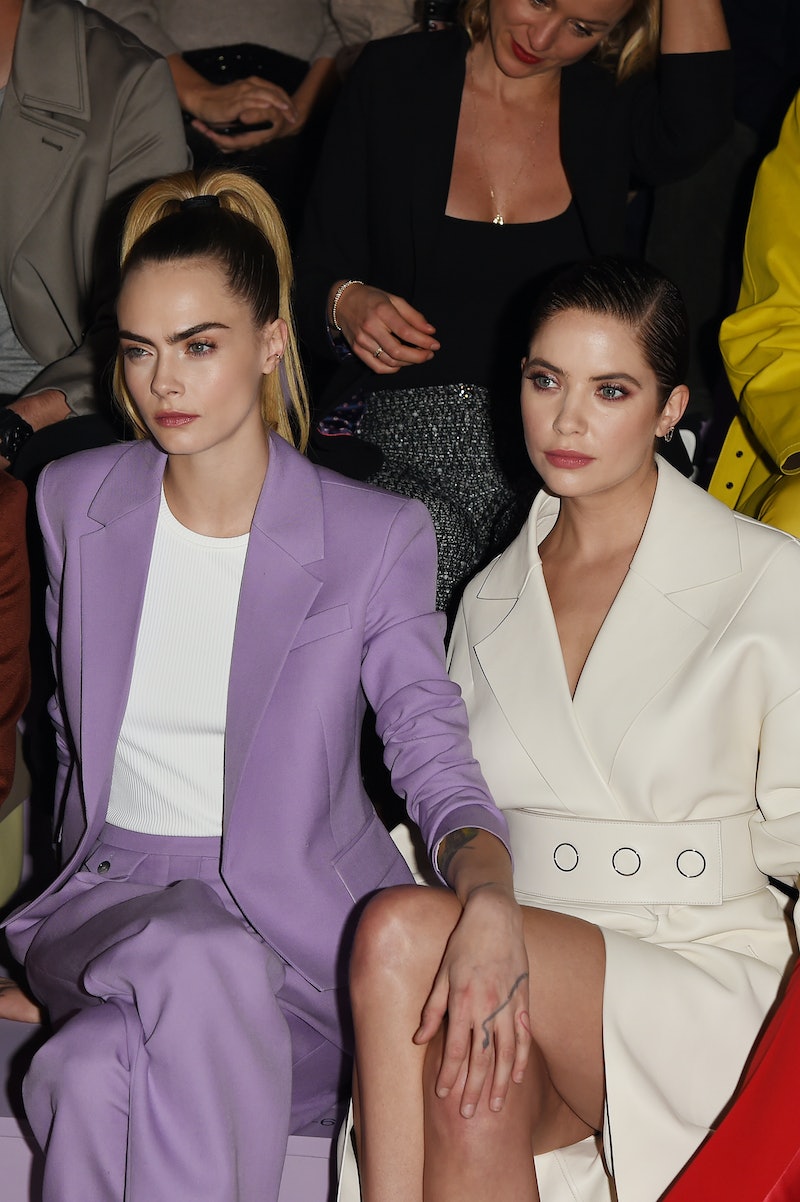 It's the end of an era. Ashley Benson and Cara Delevingne have reportedly split after nearly two years of dating. On Wednesday, People reported that multiple sources claimed the couple called it quits in early April, but neither one of them has commented on the news. Bustle has reached out to representatives for Delevingne and Benson for comment, but did not receive an immediate response.

As for the reason for the split, the couple reportedly just gradually grew apart after a rocky patch in their romance. "Cara and Ashley always had their ups and down before but it's over now," a source said. "Their relationship just ran its course.” The outlet also reported that Delevingne has been spending time with friends, actor Margaret Qualley, her sister Rainey Qualley, and model Kaia Gerber while in quarantine amid their split.

Benson and Delevingne were publicly going strong just four weeks ago, when they revealed on Instagram that they were fostering two dogs, Bowie and Hendrix, while at home. Back in March, Delevingne also posted a hilarious quarantine TikTok of the two impersonating Kourtney Kardashian and Scott Disick in the "ABCDEFGoodbye!" scene of Keeping Up With the Kardashians. On March 25, Benson shared a TikTok of them dancing together, but she hasn't updated since. Sadly the couple that TikToks together doesn't always stay together.

The couple met on the set of their critically acclaimed 2018 movie Her Smell, in which they played members of a girl rock band alongside lead star Elizabeth Moss. But they weren't linked together romantically until August 2018, when they were photographed kissing at London's Heathrow Airport. Delevingne officially confirmed their relationship in June 2019, when she shared an Instagram photo of her kissing Benson to celebrate the 50th anniversary of the Stonewall Riots and their own one-year anniversary.

The model later opened up about their relationship to Porter Magazine, explaining that she'd "never truly let anyone in before" before Benson, out of fear of them leaving and her not feeling worthy. "She’s the first person that has said: ‘You can’t push me away. I’m going to be nice to you, I love you'," she said of Benson. "I’m just like, wait, so all I have to do is just let you be nice to me? Why have I never done that before?"

More like this
Keke Palmer Shares The Sex Of Her & Darius Jackson's Baby
By Jake Viswanath
Hilary Duff's Husband Matthew Koma Has Her Name Tattooed On His Butt
By Jake Viswanath and Stephanie Downs
Channing Tatum Calls Walking Away From Relationship With Jenna Dewan “Terrifying”
By Radhika Menon
Laura Anderson Pulled The Ultimate Girl Power After Her Break-Up
By El Hunt and Megan C. Hills
Get Even More From Bustle — Sign Up For The Newsletter
From hair trends to relationship advice, our daily newsletter has everything you need to sound like a person who’s on TikTok, even if you aren’t.