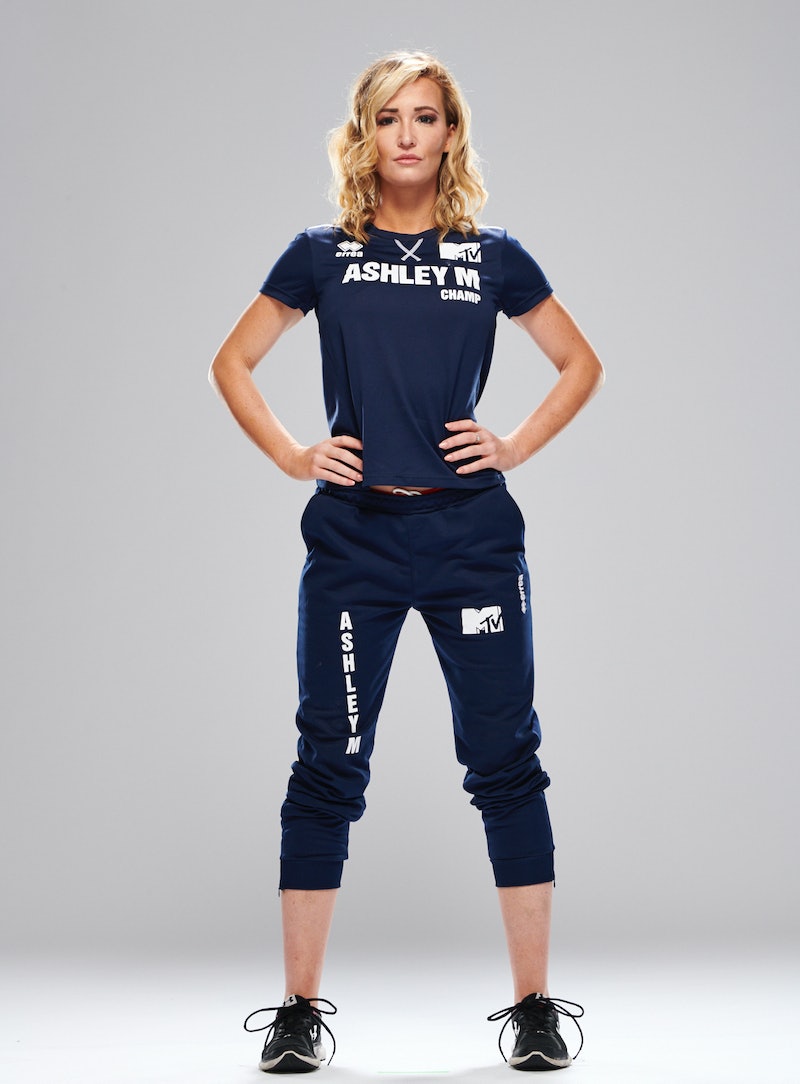 As the winner of The Challenge: The Final Reckoning, Ashley Mitchell should be celebrating her victory. Instead, she's been facing some criticism. She outcompeted partner Hunter Barfield, which meant she could either split the $1 million prize — or keep it for herself. She chose the latter, thus sparking more than a few disapproving tweets. But in a recent interview with Bustle, Ashley Mitchell defends her decision to stand up for herself and keep her prize money from The Challenge.

During the finale episode on Dec. 4, Ashley ranted about Hunter's behavior throughout the season. She declared,

"This guy has belittled me, put me down, slut-shamed me, and also threatened my life and my family's life. I'm keeping the money."

After Ashley called out Hunter on the show, he denied all of her accusations of slut-shaming, name-calling, and condescension. (Bustle reached out to Hunter for comment on the situation, but did not hear back at the time of publication.) His response to Ashley's decision on the show, however, seemingly confirmed what she accused him of doing, as he yelled, "You played me, you stupid f*cking bitch. You played me the whole entire season."

In an on-camera interview, Ashley declared, "Your self-worth is something you can't get back." Immediately after, a series of flashbacks played, demonstrating his repeated name-calling throughout the season. In one such flashback, Hunter can be seen saying, "All I'm saying is, if this stupid f*cking slut is gonna cost me half a million dollars, then I'm coming for her family."

A week after the finale aired, Hunter tweeted, "Ashley and I BOTH said things I’m sure we wish we could take back some of it you got to see but MOST of it you didn’t," but claimed he wouldn't have kept all the money for himself if the roles reversed.

Yes, Ashley made a seemingly controversial choice to keep $1 million for herself, but she's standing by that decision. And during her phone interview with Bustle, Ashley admits ultimately she wanted to send a message about why it's worth standing up for herself and how there are repercussions to certain actions.

"I just hoped I would have the opportunity to tell him, all the boys on The Challenge, and all the boys in the world that you just can't say whatever you want and have everything be fine the next day," she explains. "That's not how the world works."

Ashley, who says that being on reality TV has allowed her to learn about herself, also admits that her own "bad qualities have come to the "forefront" over the course of the season. "Believe me, I learned a whole lot about myself... It would be a shame if I didn't," she says now.

Even still, Ashley remains confident in her earned victory — despite some viewers claiming she only won because of Hunter's partnership. "I have won before this season and I will again. I have the endurance, the puzzle abilities, and the cardio," she says. "It's not fair to say that I didn't bring anything to this team when I actually was a strong asset who brought a lot."

Unfortunately for Ashley, some of her fellow competitors on the MTV series don't exactly view it the same way. That's why she vows, "I want to keep coming back to prove myself."

With tenacity (and a lot of money in hand), Ashley is grateful for her time on the show and the opportunity for others to see themselves in her shoes. "People get used to routines, whether that be with a romantic relationship or friendship. You get scared to step out of that situation, because even if it's hurting you, you're still used to it," she says.

And in those scenarios, Ashley emphasizes, "You need to know your value. Self-worth is important." She also insists, "Once you move away from someone who is putting you down or holding you back, it feels scary to take the risk, but eventually you will feel a lot better than you ever did in a toxic situation."

Ashley adds, "If you've ever been slut-shamed, put down, or threatened, you don't have to deal with that. You don't have to apologize for wanting to be treated the way you deserve."

Yes, Ashley won a life-changing amount of money, but she ended up with so much more. She is determined to help others, sharing, "I want to use the money to travel to South America, so I can do volunteer work out there."

Most importantly, though, she strengthened her sense of self and the confidence to go after what she deserves — and that's something money can't buy.