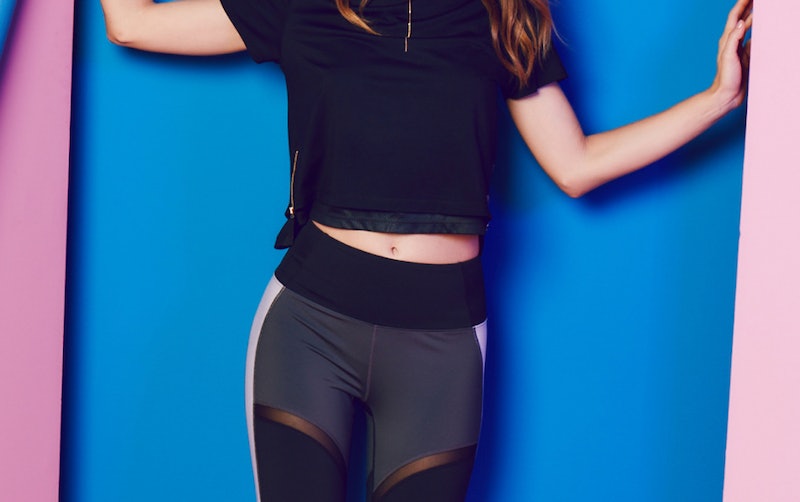 One of the biggest problems in the athleisure biz is that sometimes, the pieces that look the coolest don't actually feel that great to work out in. On the flip side, the highest-performing gear around tends to skew more utilitarian-looking than fun and fashionable. At least, until now. The new ASICS New Strong Collection at SIX:02 is solving this dilemma one comfortable, trendy piece at a time.

As a fitness brand, ASICS is known for its technical edge, from perfectly crafted apparel to incredible running shoes. That alone makes it a favorite for any gym rat or jogger, but its new chic upgrade means the pieces look as good as they feel.

The capsule collection stacks up against high-end fashion athleisure brands without the double-digit price tags — but it looks just as expensive, TBH. Paneled tights, on-trend bodysuits, and boxy tops are all on offer in the first wave of the collection, which is available online and in select SIX:02 stores. (And if you're already in love, there's more where that came from—the second drop is planned for November.)

Whether you're dedicated to your daily workouts or more of a weekend warrior, these seven pieces will amp up your fitness-meets-fashion wardrobe so you can rally after your run or hit up a post-boxing brunch.

A step up from your basic black leggings.

This track-inspired top features a mesh underlay and gold zipper detailing at the hem.

3. ASICS Barre It All Bodysuit

Go full-on ballerina at barre class, then toss on a pair of jeans to go from studio to street seamlessly.

Channel your inner boxer in this sleeveless hoodie vest.

You'll never want to take off these comfy joggers.

This paneled bra has a sweet keyhole detail on the racerback.

Workout bodysuits are making a comeback — no, really. The best part? You don't have to match a top to a pant (because you're already putting in enough effort).