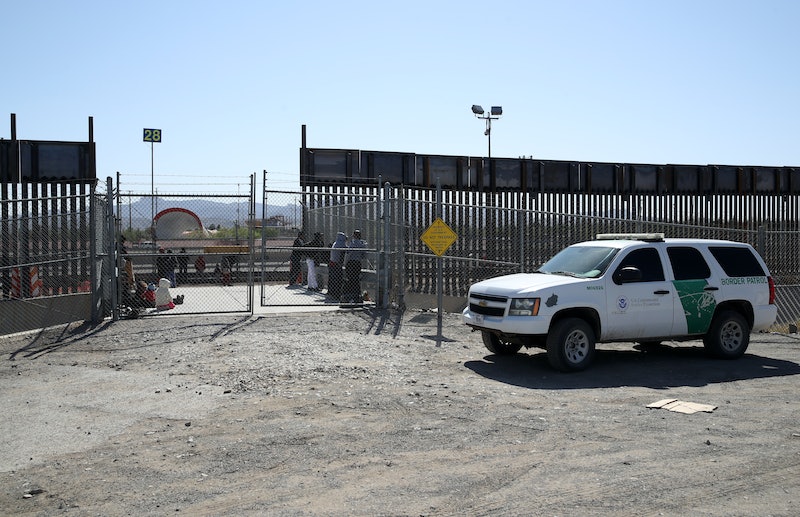 In the first immigration decision of his tenure as Trump's attorney general, William Barr has decided to prevent asylum seekers from getting out on bail, The New York Times reported. According to what administration officials told the Times, this move is the latest attempt to discourage migrants from coming to the country in the first place. Starting in 90 days, thanks to Barr's policy, asylum seekers will be forced to spend months — or even years — in jail awaiting final decisions on their asylum claims, the paper reported.

Currently, according to Citizen and Immigration Services, when a non-citizen begins the asylum process by telling a U.S Border Patrol agent they are afraid to return to their country — usually immediately after crossing the U.S. border — they begin an immigration court case. Those cases can span years, The Times reported in January. These asylum seekers then have had the option to post bail of at least $1,500 to be released while their case proceeds, an option affirmed in a Board of Immigration Appeals case from 2005.

Following Barr's order, though, being released on bail would no longer be possible — except for unaccompanied minors and families who generally must be released from detention within 20 days, CBS News reports. Neither would the policy apply to asylum seekers who enter through official ports of entry.

As a result, the total number of detainees could balloon, The Texas Tribune reported. Currently, the paper reported, there are between 45,000 and 50,000 people detained by Immigrations and Customs Enforcement (ICE) each day — and Congress has only approved funding for a little over 40,000, according to CNN. Bustle has reached out to the White House and Department of Justice for comment.

ACLU’s Immigrants’ Rights Project Director Omar Jadwat called the decision an "assault on people fleeing persecution and seeking refuge in the United States" in a press release Tuesday, in which he promised to take the administration to court. "Our Constitution does not allow the government to lock up asylum seekers without basic due process."

Asylum applications are also way up, CBS News reported, potentially lengthening the time asylum seekers will ultimately spend in jail. Last fiscal year, a total of 161,000 asylum applications were filed, while 46,000 came in the first quarter of 2019 alone, CBS News reported using numbers from the Executive Office for Immigration Review. That could further extend the backlog, which had already grown by nearly 50% under Trump, The Times reported in January.

The only remaining option for adults arriving alone to get out of immigration jail will be to seek parole from the Department of Homeland Security, Barr's decision explains. The issue there is that the parole rate for asylum seekers has fallen from 92% to 4% under the Trump administration, according to a complaint filed by the ACLU in March 2018 and reported by The Times.

Barr's decision came as a response to one case involving an Indian man who had traveled to Mexico and then crossed the border into the United States to seek asylum. Now he, and potentially thousands more asylum seekers, will have to spend years in jail — just for fleeing persecution.

More like this
Iran Has Issued A Death Sentence Over Mahsa Amini Protests
By Catharina Cheung, Darshita Goyal and Maxine Harrison
What To Know About Martin Bashir After Watching 'The Crown'
By Bustle UK
Letitia Wright's Aisha Encourages A Vital Conversation Around Immigration
By Maxine Harrison
Read Dan Levy's Heartbreaking Message After The Club Q Shooting
By Stephanie Topacio Long
Get Even More From Bustle — Sign Up For The Newsletter