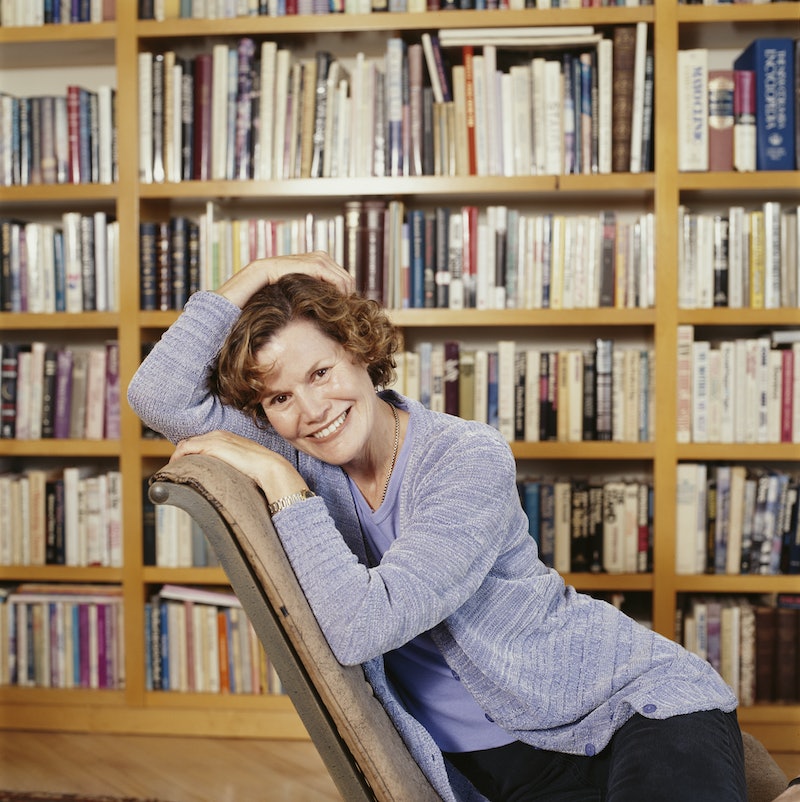 In Bustle’s Q&A series 28, successful women describe exactly what their lives looked like when they were 28 — what they wore, where they worked, what stressed them out most, and what, if anything, they would do differently. This time, Judy Blume reflects on being a young mom in suburban New Jersey who dreamed of becoming a writer.

For a long time, Blume was hesitant about allowing her books to be immortalized on screen. But last year, she began to change her mind. “My husband was in treatment having chemotherapy [and] we weren't going anywhere, so every night we would watch great series and movies at home,” she tells Bustle. Inspired, Blume flew out to Los Angeles to discuss potential adaptations, though she maintained that “Margaret wasn’t on the table.” But after receiving a particularly persuasive letter from The Edge of Seventeen director Kelly Fremon Craig, she decided to go for it.

That Margaret would still be resonating with readers 50 years after its publication would’ve been unfathomable to the then-up-and-coming writer, who began honing her craft as a lonely young mom living in a New Jersey cul-de-sac. Yet she’d go on to sell over 82 million copies of her books worldwide, receive an average of 1,000 fan letters a month, and be awarded the Library of Congress Living Legends Award. Here, Blume reflects on her marriage, being judged by her fellow housewives, and her first rave review.

I had been married for 7 years, which is ridiculous, and I was living on a cul-de-sac in a ranch house in suburban New Jersey. There was a choice of three models when you were buying a house in this neighborhood: the ranch, the split, or the colonial. I also had two little kids. I was lonely, isolated. I felt I didn't fit in with any of my neighbors. But 28 was a really important age for me, because that is when I started my career.

How did you spend your days?

I woke up early to get the kids ready. Randy would have been in preschool and Larry was still at home. The real writing didn't start until they were both in preschool and then I had two precious hours to work. Boy, I didn't waste my time the way I do now. I really used that time for creative writing. I was reading a lot of books to my kids, so my first ideas were terrible rhyming picture books that I wrote and illustrated. By the way, I can't draw at all so I painted them. It was disappointing because I would send the books in and they would be rejected.

Do you have any regrets from that time in your life?

I would never have gotten married at 21. [Ed note: Blume divorced 17 years later and has been married to George Cooper since 1987.] I was a senior in college for the first year of my marriage. I never really grew up. I did grown up things: I had babies, I had dinner parties, because that's what you were supposed to do. God, that was the worst. Dinner parties were so anxiety provoking. I did all those things, but I don't think I was really very grown up. That was life for us then. I always say the women's movement came very late to suburban New Jersey.

What’s the boldest thing you did that year?

I got an announcement from NYU’s School of Continuing Education. There was a course on writing for children and tweens. I thought, “This is an omen! I'm going to take this class.” That was a very big deal for me, because it meant once a week my husband had to be home to feed the kids. I went into New York alone at night on a bus — which freaked my mother out to no end — and took this course at NYU. It changed my life. It gave me the inspiration and the encouragement that I needed to just keep doing this.

How did people react to your burgeoning career?

Every woman on that cul-de-sac laughed when I started to write. They said, "Really? Who does she think she is? What makes her think she can do this?” That was kind of the attitude. That was certainly my husband's attitude.

I remember my first book signing. There was a woman in town who had opened a little indie bookstore and invited me to come do a signing. The newspaper came and I still remember the awful headline they wrote. Something like, "Local Mom Keeps Busy Writing Books For Little Children.”

Was there ever a moment when you felt like you made it?

I remember when I received my first rave review. [It was for] Are You There God? It's Me, Margaret in the New York Times. It was a roundup of books that were coming out, written by a woman named Dorothy Broderick. Margaret was reviewed in the last paragraph. She wrote that it was the best of the 7 books. I'm going to cry. I just remember thinking, “Somebody thinks I can really do this.”

What would your 28-year-old self think about your career now?

Blume is a founder of Books and Books Key West, which is currently shipping books nationwide.

More like this
At 28, Prue Leith Was In A Secret Affair & Sharing Apple Pie With Stoned Neighbors
By Grace Wehniainen
Lib & Will’s Romance In 'The Wonder' Is Very Different From The Book
By Sam Ramsden
Taffy Brodesser-Akner Can Write Anywhere — Even The Bathroom At Bloomingdale’s
By Samantha Leach
The 'Fleishman Is In Trouble' Book Ending Is Still Open To Interpretation
By Grace Wehniainen
Get Even More From Bustle — Sign Up For The Newsletter