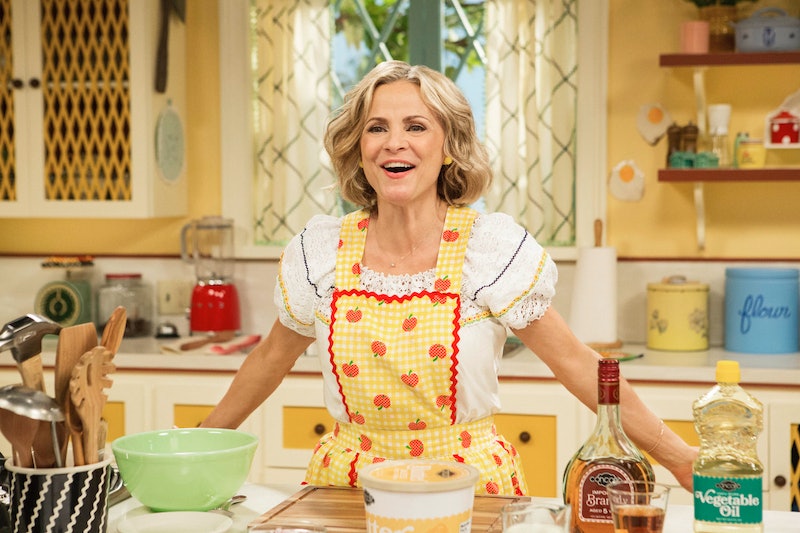 Amy Sedaris is a master of character who has seamlessly slipped into so many iconic roles throughout her career — from Strangers with Candy's Jerri Blank and Princess Carolyn on BoJack Horseman to the many guest and recurring characters she's portrayed in sitcoms, dramas, and animated series. But in her Emmy-nominated truTV series At Home With Amy Sedaris, now in its second season, she plays one of her most complex characters of all — herself.

Amy the host is a heightened version of the real Sedaris in the surreal homemaking and craft comedy. She's wacky, vulnerable, and hopelessly devoted to her art; she does everything from attempting to overcome "crafter's block" to proudly wearing bird feeders as earrings (and yes, some birds do notice).

The real-life Sedaris, though, is precise and all business in her pithy responses as we talk over the phone, especially as she breaks down her comedic strategy for playing herself in At Home. "Once I started playing the other characters, I realized that I was the straight person and they were making fun of me. And for some reason, that just clicked and it made it a lot easier to see myself and to enjoy it," she says. "I know what I'm good at and what I'm bad at, so it's fun to work on a show that you can create based on that."

Her exactness conveys a confidence and intelligence that was clearly earned from being a successful performer, writer, and director for over 30 years. Throughout those decades, Sedaris' approach to comedy has remained the same. She focuses on creating funny and complex characters, which she has done since her days performing improv at Chicago's The Second City in the late '80s and early '90s. "Everything I learned at Second City I still use," Sedaris says.

The improv theater introduced Sedaris to Paul Dinello, Mitch Rouse, and Stephen Colbert, who became her frequent collaborators. She became a performer on The Second City's main stage — the theater's highest level — in 1992, an achievement she recalls as once being a mere goal on her list of aspirations. Sedaris recites the rest of those goals as if she's mentally ticking the boxes on a checklist — because she accomplished them all.

Sedaris' next Comedy Central series Strangers with Candy, co-created with Dinello, Rouse, and Colbert, premiered in 1999 and introduced viewers to one of her most famous characters: Jerri Blank, an ex-convict, former drug addict, and former sex worker who, after being released from jail, returns to high school at age 46 with the best of intentions. Jerri started out as Sedaris' impression of on a motivational speaker named Florrie Fisher and her 1970 PSA The Trip Back, in which Fisher bluntly tells New York high school students about her past as a heroin addict and sex worker. The character grew into the star of Strangers with Candy, a satire on after-school specials with each episode similarly exploring a lesson or theme — but with much darker results. In the pilot episode, Jerri struggles to fit in, but her misguided attempt causes her to inadvertently kill a popular cheerleader and her own beloved pet turtle.

The series, which is nearing its 20th anniversary, gained a cult following and ran for three seasons (1999-2000), concluding with a prequel movie Strangers with Candy that grossed about $2 million domestically from a limited released in 109 theaters in 2005, according to Box Office Mojo. TV Guide named the series as one of the "top cult shows ever."

After Strangers with Candy ended, Sedaris became one of the most prolific guest stars on television. Name a TV show since 2001 and she probably appeared on it as a memorable "work for hire" character, as she calls it. Though one of her favorite gigs was playing divorcée Mimi Kanasis throughout Unbreakable Kimmy Schmidt's four-season run, Sedaris says she "can't think of anything that I didn't enjoy doing or working on."

But as much as she loves taking on guest and recurring characters, there was one more item on Sedaris' checklist she needed to tackle — a homemaking show she came up with the idea for around the same time as she filmed Strangers with Candy. "I really thought, 'Okay. Now it's time to get the show that I've been trying to get going for 18 years,'" she says. "And I just made it a goal to make it happen and it did." That show, of course, was At Home With Amy Sedaris. She and Dinello, who is also a co-creator and executive producer, focused on creating layered, funny characters and a vibrant world, which Sedaris calls their "go-to formula."

Season 2 of the truTV series will have more of a narrative structure, she says, and it will welcome more impressive actors to its rotating roster of guest stars, including appearances from Susan Sarandon, Jessica Walter, Matthew Broderick, Rose Byrne, Justin Theroux, and Billy Crudup, to name a few. "Just absolutely everyone who came on our show was incredible," Sedaris says. "They all came in with ideas; they're all funny, good actors." She adds a precise professional assessment as well: "[They] knew their lines. Real pros."

Off-screen, Sedaris has become a crafting and homemaking pro herself — she has written two books, I Like You: Hospitality Under The Influence and Simple Times: Crafts for Poor People. In the mid-aughts, she sold homemade cupcakes and cheese balls at Joe the Art of Coffee and on her own productions; Variety published the cheese ball recipe in 2005. Her housewares line, Amy Sedaris' I Like You, debuted at Fishs Eddy in 2014. New York Magazine's The Cut recently featured her whimsical and enchanting Greenwich Village apartment, which has bold patterns, bright colors, and a dedicated craft room — much like the set of At Home. Clearly, Sedaris has built a colorful world for her creations — one in which she can explore the many facets of herself both on-screen and off.

More like this
Every 'That '70s Show' Character Who Returned For The Netflix Spinoff
By Grace Wehniainen
Pamela Anderson's Sons Brandon & Dylan Have Their Own Hollywood Careers
By Arya Roshanian
Ashton Kutcher Wants Danny Masterson “To Be Found Innocent” In Rape Retrial
By Jake Viswanath
Linda Ronstadt’s “Long Long Time” Plays A Pivotal Role In The Last Of Us
By Brad Witter
Get Even More From Bustle — Sign Up For The Newsletter
From hair trends to relationship advice, our daily newsletter has everything you need to sound like a person who’s on TikTok, even if you aren’t.