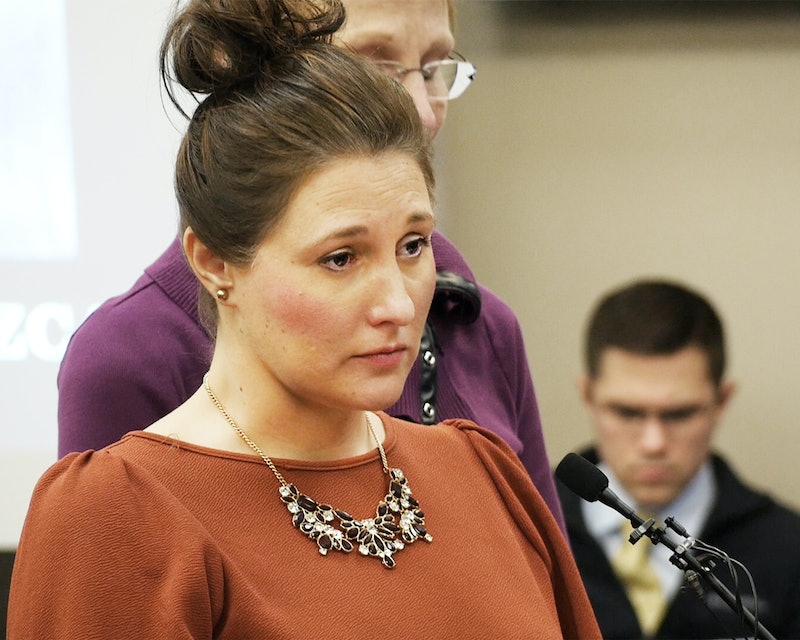 The first seven minutes of At the Heart of Gold, an HBO documentary premiering Friday about the sexual abuse scandal that rocked USA Gymnastics, does not mention Larry Nassar, the former team doctor who sexually abused more than 300 women. Instead, director Erin Lee Carr first introduces viewers to the sport: one in which young athletes are encouraged to endure pain, and where monied interests often conflict with athletes’ well-being.

“I did not want to hand this film over to Larry Nassar,” Carr tells Bustle. This was a departure for Carr, whose other documentaries, including Mommy Dead and Dearest, and I Love You, Now Die, focus on focus on dark crime stories with complex characters. “I thought it was better and more interesting to really think about the institutions that failed these women.”

Survivors form the backbone of Carr’s film. They describe how Nassar groomed them and gained their trust. They detail the subtle and overt messages they received about what was and wasn’t OK And they explore their own denial about the abuse they experienced. For Carr, convincing survivors to trust her with their stories proved to be one of the most challenging elements of the production.

“I'm an outsider,” Carr admits. “I'm not somebody who knows a lot about gymnastics. I don't work for the New York Times or the Wall Street Journal. It was very difficult to figure out the best way to get people to go on the record.”

Some survivors were understandably guarded. “When I was approached by Erin, I had a lot of questions,” recalls Amanda Thomashow, a former Michigan State University student who filed the first Title IX complaint against Nassar. “I wanted to be sure that if [Erin] was going to tell our story, it was going to be mindful of the trauma we experienced.”

“You have to start young to get good to be still young and be the best."

A few conversations later, Thomashow was in. “[Erin] spoke about us like we were superheroes,” Thomashow explains. “I realized that she would tell our story in a beautiful way that was also painful, but educational and respectful.”

That trust shines through in the film. The intimacy between Carr and her subjects allows the director to detail a culture of abuse much bigger than one man. Relying heavily on the testimony of survivors and the expertise of journalists who have spent years covering the scandal, Carr connects the dots between Nassar and the institutions that they argue enabled his abuse, including USA Gymnastics, the sports’ national governing body; Michigan State University (MSU), which employed Nassar for decades; Twistars, an elite Michigan gymnastics club; and the Karolyi Ranch, the former training camp for the USA Gymnastics national team.

Those institutions come to seem even larger and more powerful when contrasted with the youth of the gymnasts they were charged with protecting. Much of the footage Carr uses captures the beauty and strength of the sport: children and teens fly through the air, backflip on a balance beam, and tumble across the floor. The survivors are speaking as women, but the images accompanying their stories show them as kids in leotards with big, toothy smiles. “You have to start young to get good to be still young and be the best,” former gymnast Trinea Gonczar says in the film. Carr underlines how often these young gymnasts were left in parent-free environments, or sent for one-on-one treatments with Nassar behind closed doors, with no other adults present.

Not all of the survivors were elite gymnasts. Some were dancers, students at MSU, or in the case of Kyle Stephens, family friends. Stephens’ parents were close to Nassar, and he began to abuse her when she was just six years old. By the time she was 12, Stephens told her parents about some of Nassar’s behavior, specifically that he used his penis to rub her feet. Stephens’ parents took her to a child psychologist rather than the police. They continued to believe Nassar.

In her testimony at Nassar’s sentencing, Stephens recounts the pain of not being believed, and the anger she faced from her own father before he accepted that she was telling the truth (he later died by suicide). “You convinced my parents that I was a liar,” Stephens says, hauntingly, her mother crying beside her.

Thomashow was 24 years old, an adult, when Nassar sexually assaulted her during a medical appointment at his MSU office. In response, Thomashow filed her Title IX complaint. The subsequent investigation cleared Nassar of Thomashow’s claims; but the full conclusions of the report, which found that Nassar’s conduct could inflict trauma on his patients and open the university up to legal action, were kept from Thomashow.

The film ends with the survivors’ courtroom testimony and Nassar’s sentencing: he was given 40-125 years in prison. “It was a nice win,” Thomashow says. “A big one, for a lot of us, but it was just one more step towards this larger culture change.” For Thomashow and Gonczar, who are now working together to launch Survivor Strong, a nonprofit to support survivors, that change requires being honest about the pervasiveness of sexual abuse.

Thomashow contends that change is about reprogramming our cultural response to survivors, too. “When somebody comes forward and says,’ Somebody that I know hurt me,’ you don't meet them with responses like, ‘But he's such a nice guy,’ or ‘She's such a nice lady,’ or ‘They've done so much for the community.’ You listen to what you're being told. You believe the survivor and then you act from there.”

For all survivors, Thomashow hopes the film offers comfort and community. “They should be proud because they survived,” she says. “They have made it through the fire and now they have an army behind them.”