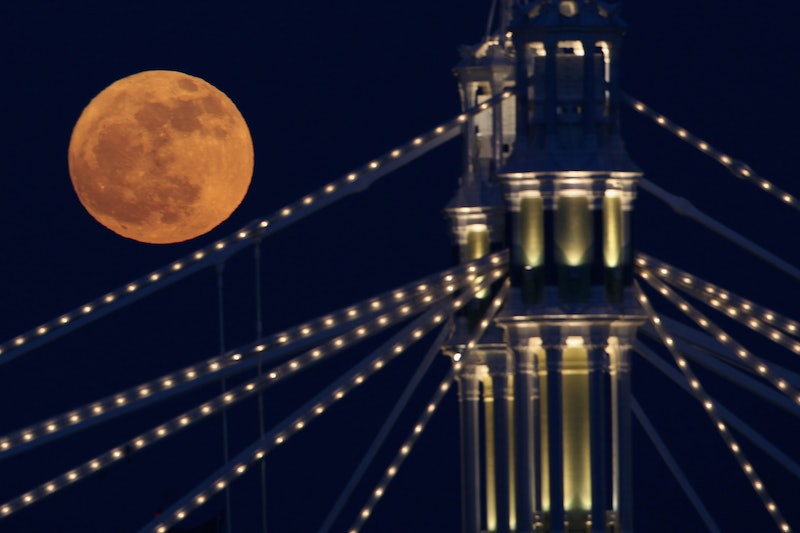 Let's all take a moment to appreciate that most of this summer's cosmic chaos is behind us. And, as a reward for surviving it like a boss, the August 2018 full moon's spiritual meanings are all about abundance, so get ready to receive. According to the Old Farmer's Almanac, the Aug. 26, 2018 full moon is known as the sturgeon moon and the green corn moon because Native Americans caught a bounty of sturgeon fish and harvested their crops.

Because of this, they referred to an August full moon as a time when all things ripen. Translation: All of your patience this past summer is finally going to pay off. According to Astrologer Jamie Partridge of Astrology King, "Five harmonious aspects surround this tense opposition to make it easy to improve your skills and develop your talents." If you feel like you've spent the summer hitting your head against a closed door, the August 2018 full moon in Pisces is about to swing that proverbial door wide open so you can walk through with ease.

"The August 2018 full moon also aligns with two fortunate and powerful fixed stars. Full moon August 2018 brings exciting opportunities for personal and professional success that improves your sense of security and stability." After this dumpster-fire summer of karmic kerfuffles, you can finally embrace the motto: Summertime and the livin' is easy. Seriously, it's about freakin' time.

"The aspect pattern formed by moon, Saturn and Uranus is a minor grand trine," Partridge noted. "It highlights creative expression and intelligence, and gives intuition, objectivity, and research." What's more, according to spiritual magazine Thrive On News, this full moon has spiritual superpowers.

"The August full moon 2018 captures the energy of let’s say [the] green lantern's ring," the article says. "A precise and marvel psychic energy reaching us from the reflective bouncing light of the galaxy. In this time psychic energy is heightened and so are the other five senses. Allowing revelations and truths to surface. Bringing forth success, wealth, and abundance." Yes, please!

If you're open to working with the universe, the August 2018 full moon is an ideal time to receive spiritual messages that can propel you forward for the rest of the year. Basically, Aug. 26 is a marvelous night for a moon dance. "With the moon shining a fantastic ray of ominous aspects our way, we can only benefit and prosper," Thrive On News revealed. "To help this along start concentrating now to conjure up positive vibrations for the coming full moon. This will be a huge advantage for those who manage to muster forth their confidence and strength. Ready [yourself] for the oncoming energy. Doing this will soften and channel the energies in the way you direct them."

This might require a shift in your mindset, especially if you've had a cruel, cruel summer. In order to successfully harness the energy of the full moon to your advantage, you're going to have to believe that you deserve everything good, and open your arms, heart, and mind to receive it. If you're familiar with the law of attraction, the August 2018 full moon is kind of like that.

Whatever you put out into the universe will come back to you like a boomerang. This means, if you want to manifest everything good, you're going to have to go into Aug. 26 with a positive attitude. "A negative attitude and feeling around this August full moon will heighten that very energy," Thrive On News noted.

"The August full moon 2018 will take whatever mood you’re in and triple its power. Making preparation positive thought and meditation more important than ever." Maybe you've been trying to manifest all summer but you haven't seen any results. This is because the astrological traffic jam of retrograde planets, super moons, and eclipses has had everything in a holding pattern, similar to an airplane circling while waiting for clearance to land.

This is where your patience can pay off if you put your faith in the universe one more time. It's not like a slot machine — you're not going to fill your bucket right away. Instead, if you work with the power of the August 2018 full moon in Pisces, your bounty should trickle in over the next six months. What's more, it's important to remember that the universe is not a solo artist but rather a consummate collaborator.

Saying you want X,Y, and Z but putting no work into making it happen is only going to lead to disappointment. If you're just sitting back and waiting for Ed McMahon to show up on your doorstep with that giant Publisher's Clearing House check, you're likely going to be waiting forever. In order to fully reap the rewards of the August 2018 full moon's spiritual superpowers, you're going to have to take active steps toward what you want, and the universe will do its best to support your efforts.

Sounds new age-y AF, right? I've tried this whole manifestation thing, and it does work if you actively participate in the process. It's kind of like when Dorothy in the Wizard of Oz realizes she's had the power to get back home inside of herself all along. So, click your heals and put your intentions out to the universe. You just might be surprised at how much magic you have inside of you.