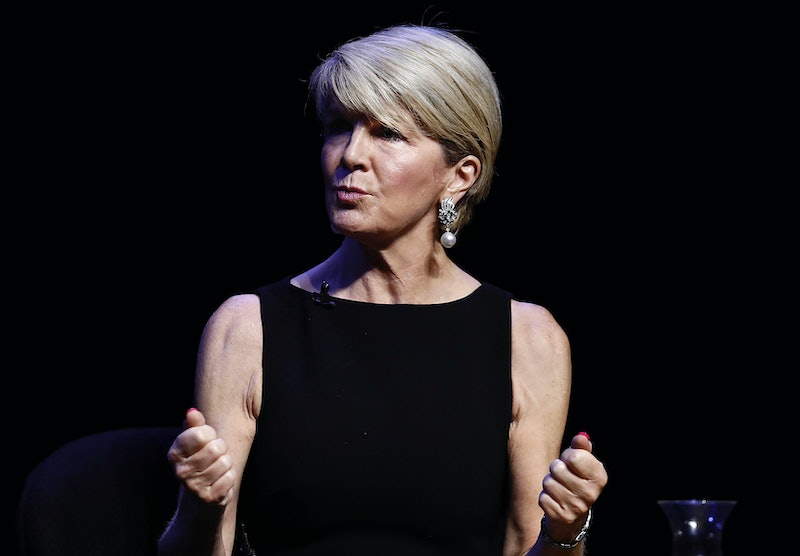 While appearing before an audience at the Adelaide Festival on Saturday, an anecdote emerged in which Australian ex-Foreign Minister Julie Bishop claimed Melania Trump mistook her as the minister's wife. Bishop, who served as Australia's Foreign Minister (the U.S. equivalent of Secretary of State) from 2013-2018, explained that her interaction with FLOTUS occurred at a UN event in 2017. When POTUS started talking to Bishop's husband at the event, she recalled, Melania turned to her and proceeded to invite her to a luncheon for the spouses of politicians.

In an emailed response to The Washington Post, FLOTUS spokeswoman Stephanie Grisham wrote, "This story is false. It is sad to hear that Mrs. Bishop felt the need to undermine the First Lady after Mrs. Trump graciously invited her to her United Nations luncheon."

Bishop's recollection of the event is a little bit different. Via New York Magazine, Bishop shared her take with the audience:

Though Bishop's story certainly implicates the first lady, her intent had to do with something else entirely: to illustrate, via an anecdote, how stigmatized politics still are on an international level, in terms of the assumption people hold that men have roles of power and women do not. What's more, she has pointed out on numerous occasions how challenging it can be when you are the only woman in a group of men.

To Australian ABC, Bishop said that her 20-year career in politics was less than inclusive. She explained, "It can be pretty lonely. You keep very much to yourself as a woman." She added, "You don't go out drinking with the boys — it's just not the same camaraderie."

Bishop also pointed out how she had been the only woman surrounded by 18 men in the Australian cabinet from 2013 onward. Via Yahoo News, she said, "This isn't fine. This is not completely normal."

As for Melania, New York Magazine pointed out that FLOTUS might have been making a pretty honest mistake, given how male-dominated U.S. politics are, as well. The publication notes that there are currently only five women in Trump's cabinet, and the number of Republican women in the House is currently at a 25-year low.

Over the weekend, Bishop also recalled a moment related to POTUS, as well. Per The Washington Post, she explained what her experience was like with the president after she met with him following his UN General Assembly Speech in 2017. Bishop said, “I was introduced to him afterwards. And it was all: 'You know, what did you think of my speech? What did you think of me?'"

The publication reports that her anecdote of the president was met with laughter. Bustle has reached out to the White House for comment.