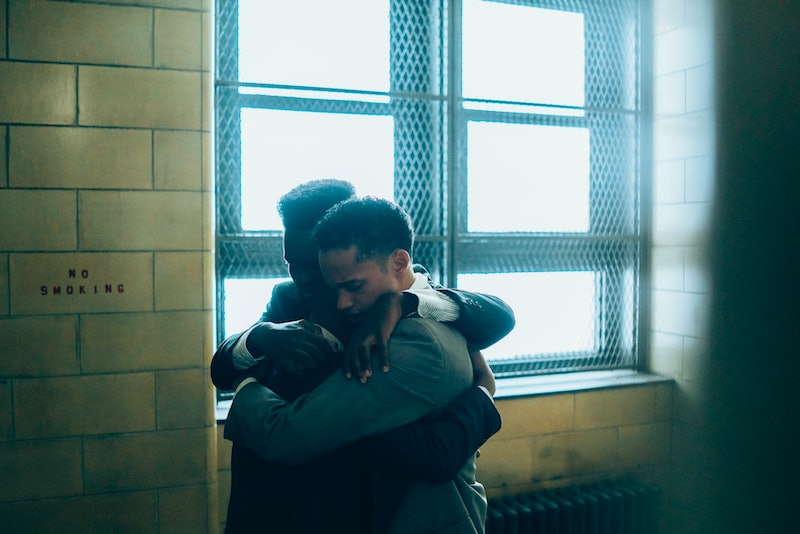 The first teaser for Ava DuVernay's newest Netflix project is here, and it is gut-wrenching. The limited series is based on the stories of the boys — Antron McCray, Kevin Richardson, Yusef Salaam, Raymond Santana, and Korey Wise — who became known as The Central Park Five in 1989 and the early '90s after they were arrested, tried, and found guilty of a crime they have since been proven not to have committed. DuVernay has been teasing the project for months, and now, thanks to Netflix's When They See Us teaser, the series finally has an official release date.

DuVernay's When They See Us will premiere on Netflix on May 31, according to the new teaser, which dropped on Friday, March 1. The teaser previews the horrible beginnings of the injustice. "In 1989, five black and brown teen boys were wrongly accused of a crime they did not commit and branded The Central Park Five, a moniker that has followed them since that time," DuVernay said in a statement from Netflix obtained by Bustle. "In 2019, our series gives the five men a platform to finally raise their voices and tell their full stories. In doing so, Korey, Antron, Raymond, Kevin, and Yusef also tell the story of many young people of color unjustly ensnared in the criminal justice system."

The teaser begins with one of the boys at home in his room — just a regular kid preparing to go out and meet his friends. But the scene quickly takes a turn once he steps outside, where he is picked up by police and thrown into a cell with four other boys. "Let's get an army of blue up in Harlem," a voice off screen says. "You go into those projects and you stop every little thug you see. You bring in every kid who was in the park last night."

In 1989, McCray, Richardson, Salaam, Santana, and Wise — all teenagers at the time, none above the age of 16 — were accused of raping a white, female jogger in Central Park. After what Salaam would later describe in an op-ed for The Washington Post as hours of interrogations by the police — including an alleged lack of food, water, and sleep — the boys all confessed. (Though their details were inconsistent and they have since alleged that these confessions were coerced.)

McCray, Richardson, Salaam, and Santana were tried as juveniles and sentenced to five to 10 years in prison each. Wise, who was tried as an adult, was sentenced to five to 15 years. According to AM New York, they had all served sentences of between six and 13 years before another man confessed to the crime. Eventually, their convictions were vacated in 2002. They later filed a law suit against the city of New York, accusing police and prosecutors of "false arrest, malicious prosecution, and a racially motivated conspiracy," according to CNN. In 2014, they were awarded a $41 million settlement, per AM New York.

The four part series will follow the entire saga, from the 1989 interrogation, all the way up to the 2014 settlement. And in her tweet announcing the release date and title of her new series, DuVernay made clear that one of her goals with this project was to make sure that McCray, Richardson, Salaam, Santana, and Wise would no longer be known as the "Central Park Five," but by their names. "Not thugs. Not wilding. Not Criminals. Not even the Central Park Five," she wrote. "They are Korey, Antron, Raymond, Yusef, Kevin. They are millions of young people of color who are blamed, judged and accused on sight."

The series will no doubt be a difficult, heartbreaking watch when it hits Netflix in late May. But ultimately, it will be, as DuVernay tweeted, "a film...about who they really are" — a portrait long overdue.

More like this
The First Clip From Netflix’s Queen Charlotte ‘Bridgerton’ Prequel
By Bustle Editors
Where Is The Bling Ring’s Rachel Lee Now?
By Arya Roshanian
What Is 'Pretty Wild' Star Tess Taylor Up To Now?
By Morgan Leigh Davies
Lori Vallow’s Son Was Arrested For Sexual Assault Days Before 'Sins Of Our Mother' Premiered
By Brad Witter
Get Even More From Bustle — Sign Up For The Newsletter