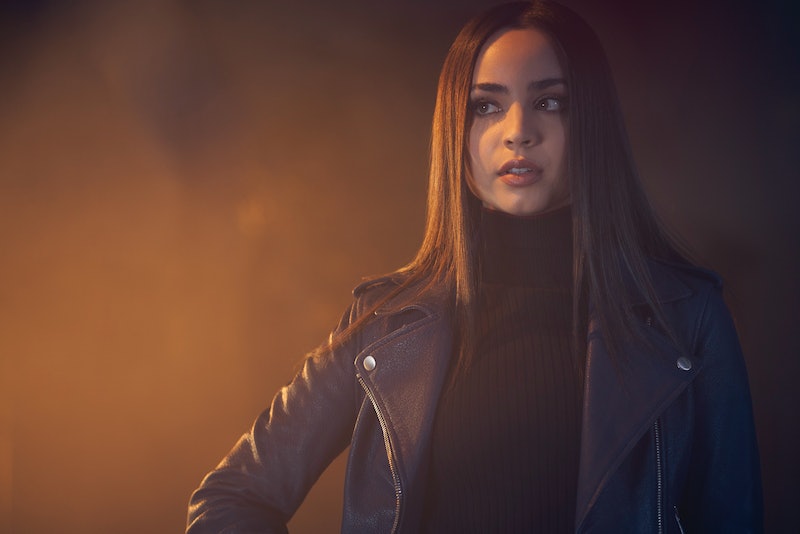 Pretty Little Liars fans who want PLL: The Perfectionists to be done right, listen up. One of the new core stars is actually a huge fan of the original series, so you know she'll be bringing her... A-game (pun intended) to the Freeform spinoff. That person is Sofia Carson who plays Ava Jalali on The Perfectionists, a "trendsetting blogger and coder who strives to be a fashion icon," per Deadline.

"I spent many a night watching [PLL] in my room, [marathoning] it with my sister," Carson, who's best known for Disney's Descendants franchise, tells Bustle. "So when I met [showrunner I. Marlene King] and I was offered the role I was beyond, beyond honored to be able to follow in the original’s footsteps and continue this legacy."

Her character is actually trying to create her own legacy on the show after her parents left her behind and the family name in tatters to flee from the FBI. "She’s lived a very hard and lonely life, and she has had to build herself from nothing," Carson says. But Ava's strong ability to persevere will carry her on through any of the trials and the tribulations the show throws at her — which she hints may be a lot.

"Ava's journey is a roller coaster. Marlene said that to me, 'Get ready and hold on tight, because it’s a roller coaster,'" Carson recalls. "So much happens, good and bad, but I love seeing how she perseveres and survives despite everything." The actor adds:

"Ava's story to me is a story of an unstoppable and invincible girl who against all odds, against loss, against losing everything and everyone she is determined to survive. And not only survive, but to prove to herself and to the world that she’ll be able to be anything she strives to be."

With a set of characteristics like that, it's no wonder Carson calls Ava "such a strong and remarkable character."

Carson's Ava is one of three Perfectionists enrolled at the school (and seemingly hiding just as many secrets as the four Liars of the original series). She's joined in the main cast by Sydney Park (aspiring politician Caitlin Martell-Lewis) and Eli Brown (hopeful cellist Dylan Walker) to round out this over-achieving group of Perfectionists. In a trailer for the series, viewers can see just how seriously these students take their respective passions.

In the clip, Dylan practices his cello until his hands bleed, Caitlin is going for a run in the wee hours of the morning, and Ava breaks a pencil while furiously drawing a fashion sketch. The voiceover hints that there's tension in the air at this prestigious college and "someone is about to snap and kill."

Is Ava the guilty one? It's much too early to tell, but Carson did hint to Entertainment Tonight that "not everything is as it seems with [Ava]." So keep your eye on this one. She could be strong enough to persevere her way through murdering someone.