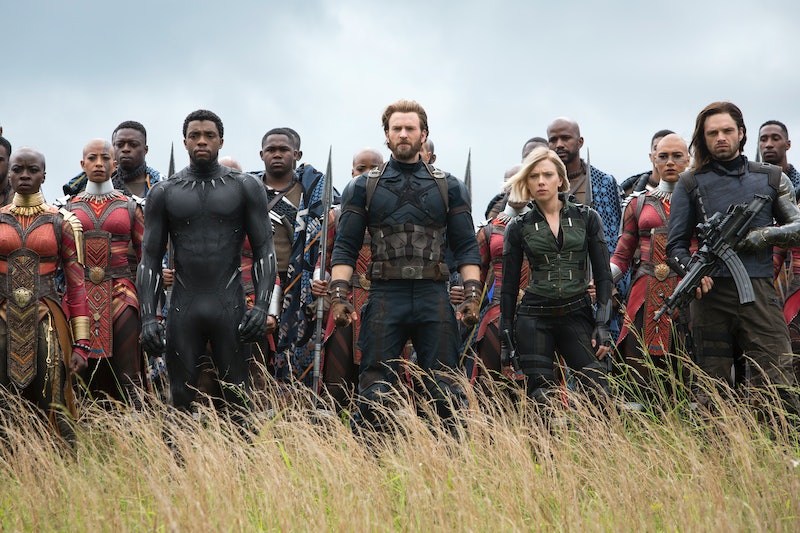 Superhero movies bring in the big bucks — no surprise there. They've got a guaranteed fan-base, blockbuster budgets, and major celebrity star-power. Avengers: Infinity War is about to break a box office record, though, and will soon become the fastest film in history to cross the $1 billion mark on Friday or Saturday, according to The Hollywood Reporter. In total, only 33 movies have ever made that much money — almost all of them in the action genre.

Update, May 5: As reported by CNN, Avengers: Infinity War reached the $1 billion earnings mark on Saturday, May 5, a record 11 days after the film was released in theaters.

Earlier: Marvel's Avengers: Infinity War will likely hit $1 billion on either May 4 or 5, THR reports, which will be either the 10th or 11th day, respectively, since it started playing overseas in theaters. The film will be knocking Star Wars: The Force Awakes out of the number one spot, as per Variety, which achieved the $1 billion milestone after twelve days. Both films are Disney titles, and packed with action — two overwhelming characteristics of the $1 billion box office club.

Infinity War will be the 34th film in the last 25 years to gross over $1 billion worldwide, according to Insider. Of the 33 other films on the list, 22 fall under "action" — which makes it abundantly clear what people like to spend their money on at the movies. Not just any action flicks, though. People are flocking to the theaters for franchises.

As for the rest of the list, seven of the films are animated, six are Marvel movies, and there's a few non-action/mixed-genre outliers like Avatar, Tim Burton's Alice in Wonderland, Beauty and the Beast (2017), Harry Potter and the Deathly Hallows: Part 2, and Titanic — which, by the way, is only one of three '90s movies to have ever grossed that much. Overall, 17 films on the list are Disney-owned titles (including the Marvel movies and Star Wars series).

Action-packed franchise films are a definite favorite, and Infinity Wars has become a fast-favorite, financially, for the Marvel franchise.  In terms of how the other big-bucks Marvel movies compare to the record Infinity War is about to break, Captain America: Civil War, Avengers: Age of Ultron and Black Panther all hit $1b in 24 days, Iron Man 3 took 22 days, and The Avengers (the original) got there in 19, according to Business Insider. That means that Infinity War will have grossed $1b more than a full week before any other Marvel film. Impressive.

For some film critics, though, money-making superhero franchises are becoming a problem. And, according to Roger Ebert's Matt Zoller Seitz, it's because superhero films aren't being made for entertainment — they're being made as a product. Zoller Seitz writes,

"The marketplace rewards each new superhero movie with a reflexive paroxysm of spending, guaranteeing each $200 million tentpole a boffo US opening that follows a boffo international opening (the new release pattern flips the old one). It's an entertainment factory in which the audience is both consumer and product. Its purpose is not just to please consumers but to condition and create them."

Infinity War currently has an 84 percent on Rotten Tomatoes, but not all of Marvel's movies have faired quite so well. According to the rating site, there have been 19 total Marvel movies made over the years, with Black Panther currently at the top of the list (96 percent) and Thor: The Dark World at the bottom (66 percent).

Clearly, though, ratings aren't stopping fans from flocking to the the theaters to catch action and Marvel movies. And based on the way fans are flocking to see Infinity War, becoming the fastest $1 billion-grossing film won't be the only record it breaks.