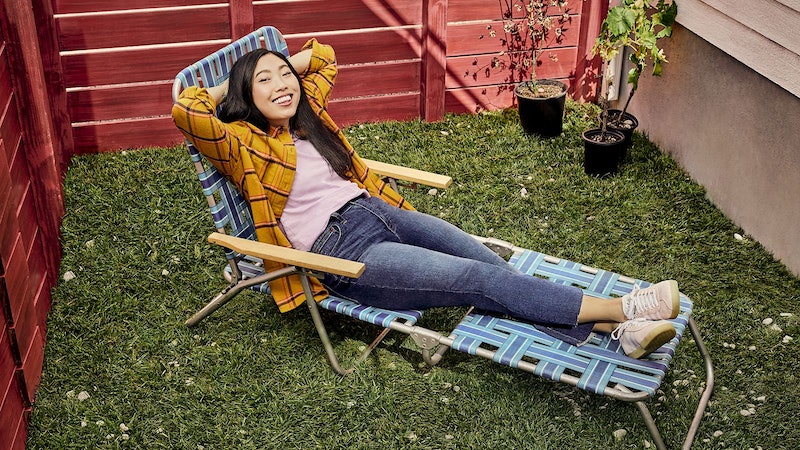 Awkwafina is ready for fans to meet her other side: Nora Lum. And, to help, she's pulling back the curtain on her real-life upbringing in Comedy Central's new sitcom, Awkwafina Is Nora From Queens. The half hour comedy series is set to premiere on Wednesday, Jan. 22, and is loosely based on the rapper's life while growing up in Flushing. And, as the first trailer for the sitcom shows, before she made a name for herself as Awkwafina, the performer was just another young adult struggling with growing up.

In the show, Awkwafina plays Nora Lum, which, fun fact, is Awkwafina's real name. 27 and still living at home, Nora is struggling to find purpose in her life. “I wish I had purpose like you, you dumb b*tch," she cries to her friend in the trailer. Luckily, she has a great support system in her dad, played by Law & Order: SVU alum BD Wong, potty-mouthed Grandma, portrayed by Orange Is the New Black‘s Lori Tan Chinn, and her cousin, played by Saturday Night Live‘s Bowen Yang.

But considering that Nora has no idea what her Social Security number is (a fact that she claims is quite common among the general public), it's safe to say she could use all the help she can get as she navigates the challenges of young adulthood.

Wong, Yang, and Chinn are just a sample of the star power that will pop up throughout the 10-episode season. According to a press release obtained by Bustle, notably guest stars for the series' first season include Orange Is The New Black alums Natasha Lyonne and Laverne Cox, Jamie Chung, Harry Shum Jr., Ming-Na Wen, and Marvel's newest superhero actor, Simu Liu — to name a few.

The series also promises to showcase a uniquely female perspective. As Deadline pointed out, most of the episodes will also be directed by women, including Lyonne. And it also featured an all-female writers room. Putting women in charge is more than just a diversity trend for the comedian. "There is a genuine urge for audiences to want an industry that represents their life," she recently told The Hollywood Reporter. "We're changing as a society."

More like this
The ‘Emily In Paris’ Season 3 Trailer Teases Major Career & Love Crossroads For Emily
By Bustle Staff
The First Trailer For 'That '90s Show' Includes So Many Nods To The Original Series
By Jack Irvin, Alyssa Lapid and Grace Wehniainen
Keke Palmer Just Announced She's "Going To Be A Mom" On 'SNL'
By Brad Witter
The 'Kenan & Kel' Reunion On 'SNL' Took A Dramatic Turn, Thanks To Keke Palmer
By Brad Witter
Get Even More From Bustle — Sign Up For The Newsletter