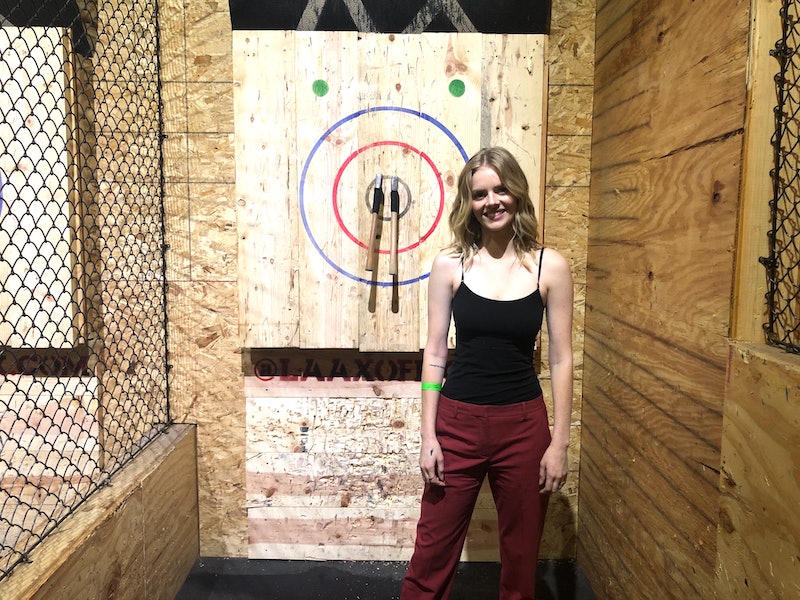 Samara Weaving is wearing a chic maroon pantsuit and wielding a small axe. She readies her stance in one of the lanes of the Los Angeles axe-throwing bar LA AX, but just before she hurls the weapon at the bullseye, she pauses. The star of the horror/comedy Ready Or Not sheds her blazer, revealing a less physically-limiting black camisole, and launches the blade with one swift move. The axe comes close to the wooden target, but doesn't quite nail it. "But I want to get the bullseye," she says. Within the next few throws, she lands several of them.

"I didn't really hold a lot of weapons in the film," Weaving recalls about Ready or Not, which hits theaters on Aug. 21. It's the in-laws of newlywed Grace who are armed to the teeth. But she predicts that her character would have handled them "pretty well" in the movie. "She's scrappy," the actor correctly assesses.

That "never say die" spirit drives Weaving's Ready or Not heroine, who surely wasn't expecting to be running for her life on her wedding night, hunted by her wealthy new relatives in the most terrifying version of hide-and-seek ever depicted onscreen. But the bride-turned-prey's battle to survive sets her up as yet another new interpretation of "the final girl," who subverts many of the genre's tropes.

"She's such a logical woman, and we said from the beginning that we didn't want her to accidentally go up the stairs and make foolish choices," Weaving says of the Ready or Not team, which includes screenwriters Guy Busick and R. Christopher Murphy and co-directors Matt Bettinelli-Olpin and Tyler Gillett. "Even if there had [to be] a split-second reaction, she would think of the right way to do things."

Carol J. Clover's 1992 book Men, Women, and Chain Saws: Gender in the Modern Horror Film defined the "final girl" as the morally pure, virginal, and often brunette female sole survivor who finally defeats the villain in '70s and '80s slasher films. Fast forward to 2019: Ready or Not's Grace is blonde; grew up in a rough home as a foster kid; is sexually active with her husband Alex Le Domas (Mark O'Brien); and isn't facing just one slasher, but an entire family of villains out for her blood. She's a protagonist with no clear allies, and the Le Domas clan openly underestimates her abilities. They believe that something very bad will happen to all of them if she's alive at the end of the night — but that there's little to no chance she'll emerge triumphant. They have power, and she doesn't.

"She just gets more determined," Weaving says. "She gets angrier. She's probably heard that her whole life. And she has been in and out of foster care and probably had to fight for food and been treated the same way [there]. She can use that to her advantage."

The 2012 movie Cabin In The Woods and 2015's The Final Girls also subvert the horror trope, but they do so in a very meta way. Grace, on the other hand, isn't using any the genre's conventions or stereotypes to her advantage as she fights to stay alive through the night. She's just the hero of an extremely out-there movie trying to survive in a very grounded way.

She even uses the impractical outfit she's forced to fight and run in. Grace wears her white wedding gown throughout the film, but it doesn't stay pristine. She rips off strips of the garment to care for her injuries. Sometimes it even becomes a weapon — perhaps in a metaphor for the innocence she loses during the brutal wedding night. Grace is so happy to be marrying Alex at the beginning of the movie; by the end, she's let go of any illusions she had about her "special day."

"When you're about to get murdered, [the wedding dress] is not on the highest list of priorities," Weaving says. "She is resourceful in that way ... The dress comes in handy."

And much like Grace, Weaving doesn't limit herself to one option. She gives one of the bigger axes a try. She gets a lesson in handling the larger weapon from the facility's coach Kevin Lamb, then steps into the lane guarded by a "Big Axe" safety chain and yellow cone. Weaving holds the longer handle, strides forward, and sends the blade tumbling below the target board. This axe is far heavier and more unwieldy than the others she's tried. After a few throws, she wipes the sweat off her brow and smiles.

The actor takes to axe throwing with the same enthusiasm she has the comedy/horror genre. Among past projects are McG's The Babysitter, in which she plays a demonic caregiver; Mayhem, Joe Lynch's ultra-violent, unrated action flick; and a few episodes of Ash Vs. Evil Dead, the TV spinoff of the popular B-movie franchise. (And yes, she already knows you think she's a ringer for Margot Robbie. She and the Once Upon a Time in Hollywood star are friends, and Weaving calls the comparison "flattering" — even though she herself doesn't quite see it.)

With that in mind, it's not surprising that Weaving also appreciates how Ready or Not expertly blends elements of the horror, thriller, and comedy genres to make one entertaining thrill ride of a movie. In a refreshing twist, the Le Domas family fully realizes the absurdity of the situation, making them more than just one-note villains. The class distinction between Grace and her predators is one source of the movie's comedy. Ready or Not pokes fun at the institution of wealth, especially "old money." In the case of the Le Domases, theirs comes from a suspicious source.

"They are antagonists, but they're really human," Weaving explains. "There's a lot of guilt to how they make their money ... They started from nothing and they're happy to pay that price, but other characters are less excited about it."

That's putting it mildly. Fortunately, Weaving's Grace is a final girl that the other 99% can root for.