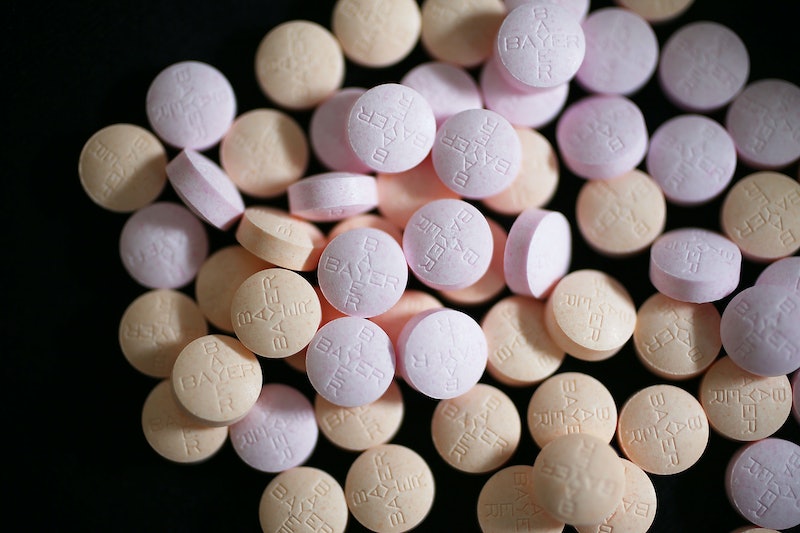 The idea of taking a daily aspirin as a way to lower your risk of health issues has been debated by scientists for some time. A 2007 study found that some women who took a daily dose of aspirin were less likely than others to die of heart disease, stroke, or colon cancer, but another study in 2018 found that there was little to no effect for most people when they took one every day. Now, a new study co-led by the Moffitt Cancer Center in Florida has added a new ingredient to the mix. It shows that daily doses of low-dose, or baby aspirin, can lower ovarian cancer risk in women.

The study, published in JAMA Oncology, looked at the health of over 200,000 female nurses from 1989 to 2015. The nurses were part of a study that tracked women's health over several decades by asking them to report many aspects of their lives, including how much aspirin they took and how often. Of those women, 1,054 developed ovarian cancer.

The scientists looked at how ovarian cancer might be affected by aspirin use, and discovered that taking a baby aspirin, which weighs 100mg or less, every day meant a 23 percent reduction in the risk of ovarian cancer. Interestingly, bigger doses of aspirin in the standard size didn't show any link with reductions in ovarian cancers.

Aspirin's potential cancer-busting properties, the scientists say in the study, seems to lie in its relationship with inflammation. Aspirin is an anti-inflammatory substance, and "there is growing evidence to support a role for inflammation in the development of ovarian cancer," the study notes.

In particular, ovulation, which causes inflammation every time it happens, is tied to ovarian cancer; the more menstrual cycles you have over your lifetime, the more likely you are to develop ovarian cancer, some research has noted. A study in 2009 found that women who had their first period before the age of 12 were 51 percent more likely to die of ovarian cancer than those who'd started menstruating at 14 or later.

Ovarian cancer will kill over 14,000 American women in 2018, according to the American Cancer Society; it's the fifth most deadly cancer among women. Right now, science can only say that there's definitely a relationship between inflammation, aspirin, and ovarian cancer; it can't be more precise about how the preventative mechanism might work, and more studies are needed to understand it. “If future research confirms our findings, conversations on the risks and benefits of low-dose aspirin use may broaden to include ovarian cancer prevention,” the study's lead author, Dr. Mollie E. Barnard of the University of Utah, told The New York Times.