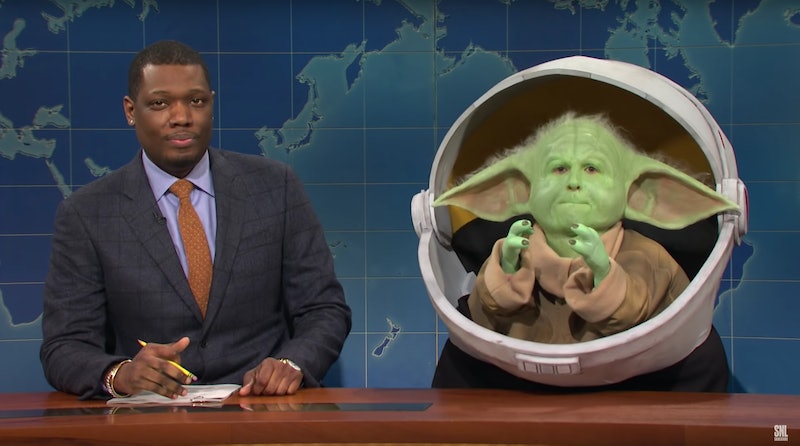 One month after becoming a beloved meme, Baby Yoda appeared on SNL, and the character wasn't quite as cute as Weekend Update host Michael Che hoped. During the segment, Baby Yoda, portrayed by SNL cast member Kyle Mooney in green makeup, bragged about his newfound fame and threatened to fight other adorable movie characters.

SNL turned Baby Yoda from adorable meme to rude talk show guest, and during the sketch, Baby Yoda told Che, "I been blessed. All the memes and the fans, some sliding in the DMs a little bit." He also said his "squad is in the house," showing a photoshopped picture with Timothée Chalamet, Robert Pattinson, and "the guys from the Sonic commercial." The character also plugged a clothing-line, which sells three fingered gloves called "Handalorians", as well as a rap mix-tape and Netflix stand-up special.

Baby Yoda also revealed that becoming a meme has been a, "wild ass experience", and despite his new fans, he does "have his haters." Then, the character called out Baby Groot from Guardians of the Galaxy, saying, "Do me a favor, keep my name out of your little tree mouth, before I snap you like a twig."

In November, Baby Yoda, a character known only as "The Child" in the The Mandalorian on Disney +, went viral on social media. In the first episode of The Mandalorian, the Bounty Hunter must locate an unidentified target, one which is 50 years old, and he is given little other information. In the last moment of the episode, the Bounty Hunter apprehends the target, which is an adorable creature dubbed "Baby Yoda" by the Internet, due to the child's resemblance to the iconic Return of the Jedi character.

It's unlikely that Baby Yoda is the same Jedi master from the original films, but even so, the internet quickly became obsessed with the character. One fan tweeted, "if my future child doesnt look like baby yoda i dont want anything to do with it," while another wrote, "all human babies are cancelled until further notice #BabyYoda." On Twitter, fans continued to gush about Baby Yoda's cuteness, with one writing, "look i know this baby yoda is just another way to sell toys or whatever but i love him so much look at him being tiny with his wrinkles like whats he doin whats his purpose why is he so cute."

It might be hard to ruin Baby Yoda for Star Wars fans, but SNL's monstrous portrayal, may just put those memes to rest. On Sunday, SNL tweeted a time lapse video of Mooney getting into costume, writing, "From @kylemooney to Baby Yoda."

Mooney's costume, complete with floating crib and three-fingered hands, may have made for a funny sketch, but his terrifying take on the character, may make fans see Baby Yoda in a new light.

More like this
The Black Lotus Staff Has "Had Enough" In The 'White Lotus' Spoof From 'SNL'
By Brad Witter
Michael B. Jordan Tackled His "Public Breakup" With Lori Harvey On 'SNL'
By Brad Witter
Who Is Pete Davidson Dating? He & Chase Sui Wonders Got Caught Kissing
By Jake Viswanath
Twitter Has Renamed Ekin-Su After *That* 'Dancing On Ice' Performance
By Sophie McEvoy
Get Even More From Bustle — Sign Up For The Newsletter
From hair trends to relationship advice, our daily newsletter has everything you need to sound like a person who’s on TikTok, even if you aren’t.