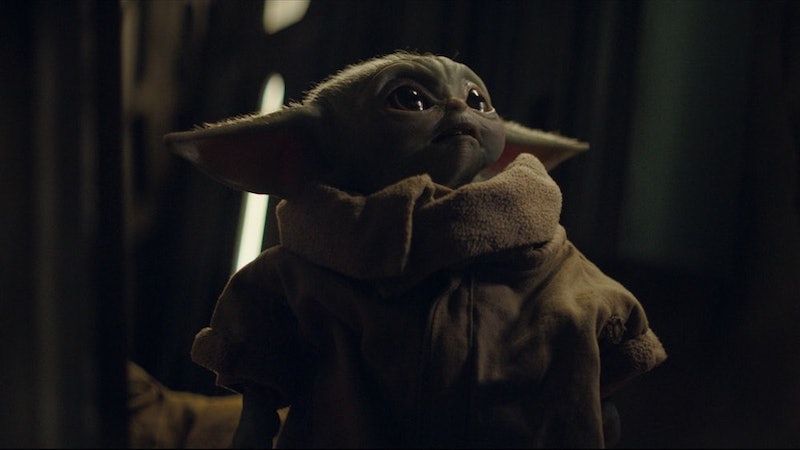 If there ever was a time when the world was in need of Baby Yoda, it's right now. Thankfully, Disney+ is both ready and willing to cater to those needs. The streaming platform announced on Wednesday, April 15, that it is planning to release an eight-episode Mandalorian docuseries that could explore Baby Yoda's backstory and give fans a deeper understanding of the adorable yet mystifying creature. Basically, if there was any hope of discovering some of his secrets before the second season — this is the way.

Titled Disney Gallery: The Mandalorian, the docuseries is slated to debut on Monday, May 4 (aka Star Wars Day) and, as per the press release, "invites the cast and crew to share an unprecedented look at the making of the series," which hit the platform back in November. Throughout the docuseries, each chapter will explore "a different facet of the first live-action Star Wars television show through interviews, never-before-seen footage, and roundtable conversations hosted by Jon Favreau," who serves as executive producer.

Topics that fans can expect to be covered throughout the upcoming new episodes include behind the scenes details, exploration of George Lucas' Star Wars series and its legacy, and interviews with the cast. The docuseries will also delve into "the series’ groundbreaking technology, the artistry behind the show’s practical models, effects, and creatures," which seems to point directly to Baby Yoda, as well as the score, and "connections to Star Wars characters and props from across the galaxy."

Notably, neither Baby Yoda nor Season 2 are mentioned anywhere throughout the press release, but that doesn't mean the doc won't incorporate a few details of what's to come, and perhaps shed some light on Baby Yoda's many secrets. After all, there's still so much about the little guy that we just don't know.

The end of Season 1 found Baby Yoda captured and heading toward the clutches of Moff Gideon. It's unclear what exactly he wants the Child for, though, as he stated to Mando earlier in the episode, "It means more to me than you will ever know." One theory suggests that Moff Gideon plans to use Baby Yoda to create the First Order. He was the former leader of the Galactic Empire after all, so odds are that his intentions are far from pure.

Then, of course, there's so much to discover about Baby Yoda's backstory. Where did he come from? Where are his parents? What exactly is his species? With any luck, the docuseries will provide at least a little insight on some of these questions — or at the very least, provide us with a few more meme-able moments.