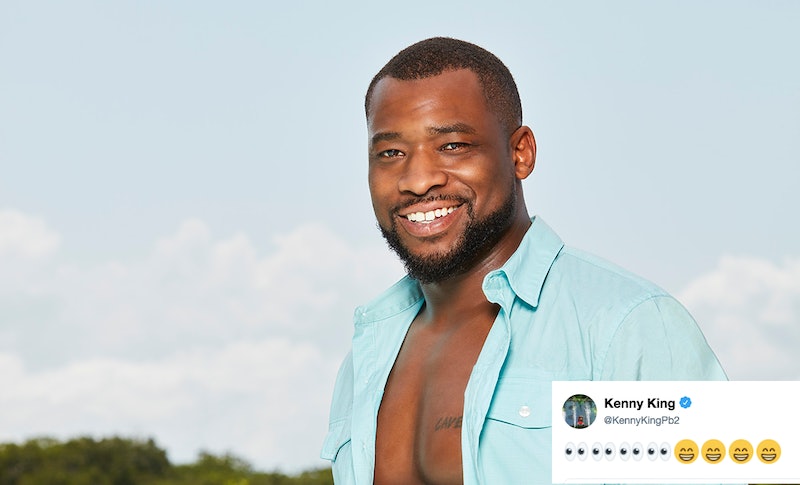 Former Bachelorette contestant Kenny may not have found love in Paradise, but it looks like he's doing just fine on his own. Based on the Instagram and Twitter evidence, it looks like Kenny King has a new girlfriend. And the two of them seem super happy together, based on the photos she's posted on Instagram.

As it turns out, hairstylist and makeup artist London Ferris has been sharing photos of herself and Kenny on Instagram for months now. The two of them rang in the new year with a sweet kiss, and they even spent Christmas together with their kids. In her Instagram post about Christmas, Ferris even tagged the former Bachelorette contestant's Instagram handle in her caption. It looks like this relationship has been hiding in plain sight, right under Bachelor Nation fans' noses.

On Thursday, though, E! News reported the news of Kenny's new relationship, pointing to the clues from his girlfriend's Instagram account. For his part, Kenny also tweeted the eye emoji and some smiling-face emoji, which definitely looks like a confirmation of the relationship. His emoji came along with a retweet of a report from The Blast declaring him "off the market," so it looks like this Bachelor Nation member's heart just might officially be taken.

In addition to being a makeup artist and hairstylist, Ferris is also an Air Force veteran, E! News noted. She's shared Instagram posts about being a veteran, too.

It looks like Kenny and his new girlfriend are serious enough to have met each other's kids, too. Ferris shared a photo of them all together, using the hashtags #1stChristmas and #blended.

Aside from having their children meet each other, these two have just been generally adorable over the last few months. They even managed to take a cute photo in Times Square without fans spotting Kenny, evidently.

And for Halloween, they went as Dexter characters.

Ferris reportedly met Kenny before he went on Bachelor in Paradise, according to The Blast. But it looks like their relationship really found its footing after he returned home from the show.

And while the relationship may have gone undetected for a while, it looks like Kenny is ready to share his happiness with his fans. In an Instagram post the day after Christmas, Kenny shared a photo that leaves little doubt about his relationship status. "Christmas really got it right this year," he wrote in his caption.

The photo is such a sweet way for him to disclose the relationship, too. It's not perfectly staged at a picturesque location; it looks like the two of them are just chilling at home. And the smiles on both of their faces show how much they care about each other.

If everything happens for a reason, then it sounds like there's a very good reason Kenny didn't find love on the beach last summer. The wrestler and veteran seem totally enamored with each other, based on these new photos. Kenny didn't find love through the Bachelor franchise, but it looks like he's found happiness with someone new. And that should make Bachelor Nation fans very happy.