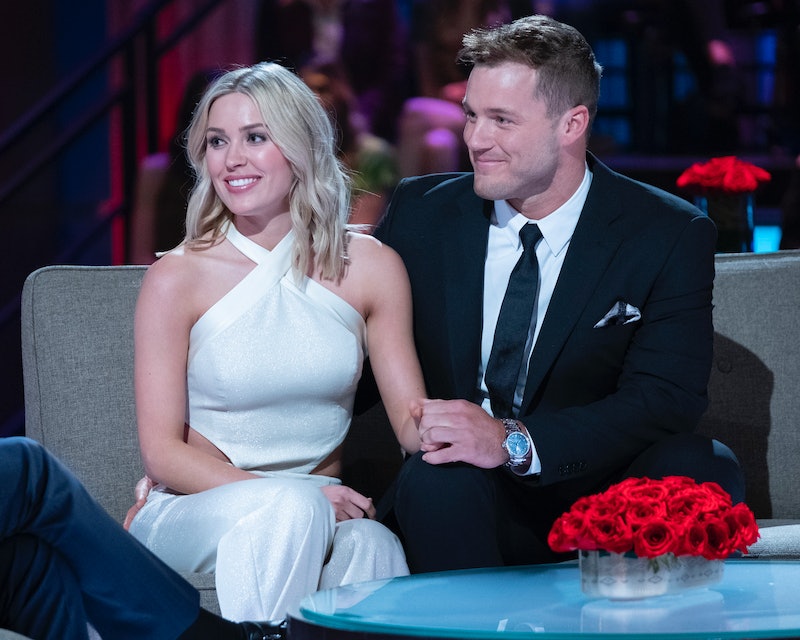 In case you missed the ending of the most recent season of The Bachelor, Colton Underwood and Cassie Randolph left the show together with plans to get engaged sometime in the future. But as it turns out, the ring they received for their future engagement isn't exactly their style. According to the Bachelor himself, Colton is returning the first Neil Lane ring he got for Cassie, per Marie Claire. And there's a specific reason for the whole bling switch.

On the March 31 episode of LadyGang, Colton opened up about the ring he received for Cassie, which was given to him by Jimmy Kimmel when the couple appeared on the March 12 episode of the late-night talk show. When the Bachelor revealed that he got a double halo square ring, the co-hosts, Keltie Knight, Jac Vanek, and Becca Tobin all had an over-the-top reaction to the pick. But, he clarified, "I didn't order it," and that it wouldn't have been his personal choice for his future bride. The group decided to phone Cassie to get her thoughts about the ring, with the former contestant clarifying, "I just have a very particular idea in my mind," which is definitely understandable.

During the segment, Colton revealed that the couple isn't stuck with the Neil Lane ring they received from Kimmel. Considering the actual bling that Cassie wants, which Colton is fully aware of, it's probably for the best that they can trade the first pick in. "I was told that I could trade it in," he said, before giving a lowdown of what Cassie actually wants, "Cass wants a gold, simple band, with an oval-cut [stone]."

It should be noted that Colton and Cassie are not actually engaged just yet, but it's a topic that's clearly on their minds. During a conversation with People, in an article published on March 12, the pair opened up about their future together, which includes a trip down the aisle. “She doesn’t have a ring on her finger yet,” Colton told the publication, “But she will, one day.” Cassie was in agreement, as she said, “We definitely talk about our future engagement,” and continued, “We’re both excited to get to that point."

In addition to an engagement being in their future, there's another major step that they're eager to take. According to the interview, they're already talking about moving in together. “Our goal is to buy a house in Huntington Beach in the next year, but we probably won’t move in together until we’re engaged or married,” Colton explained to People, "As much as I want her to live with me, it’s a big step and something we both take very seriously.” In the meantime, Cassie recently moved to Los Angeles into a residence that's "closer" to Colton, who relocated to the city from Denver, according to People.

By all accounts, Colton and Cassie's relationship is still going strong post-Bachelor. Not only do they have plans to move in together, but they're already planning their future engagement. And while that latter relationship step won't include the bling they got from Kimmel, it sounds like they already know exactly what that future engagement ring will look like.