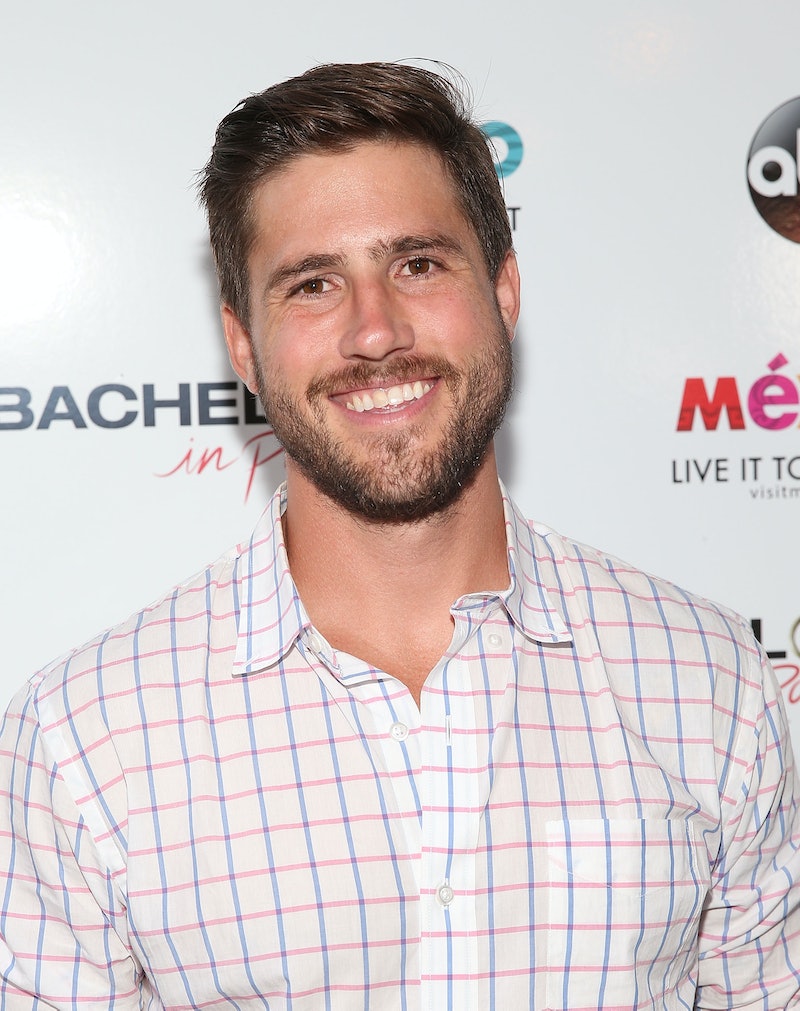 One more member of Bachelor Nation has tied the knot. On Saturday, Feb. 29, Bachelorette alum JJ Lane married Kayla Hughes in a romantic Leap Day ceremony in Denver, Colorado. JJ and Kayla, a former NFL cheerleader, were surrounded by family and friends for the big day, as per Us Weekly. Among the guests were plenty of fellow Bachelor alumni, including Tanner Tolbert and Jade Roper, whose daughter Emmy was flower girl. Other notable franchise stars also attended, including newlyweds Jared Haibon and Ashley Iaconetti, as well as Ben Higgins and Chris Soules.

Before the ceremony, JJ expressed his excited about marrying Kayla in an interview with People. "I’m so ready to marry her," he said. "My relationship with Kayla is so real and normal. I’m not nervous." The couple tied the knot at the historic Ironworks event venue in Denver, Colorado, and the bride wore a custom gown by Mindi Linscombe, per People. Tanner served as a groomsman for the event, while JJ's daughter Gemma from a prior marriage was a junior bridesmaid.

JJ's fellow Bachelor Nation alumni documented the festivities on social media. Jade posted a video of her 2-year old practicing for flower-girl duties on her Instagram Story, while Jared shared several updates with Ashley on his Instagram Story during the event, writing, "Attending the first wedding since our own!"

Prior to meeting Kayla, JJ competed on Kaitlyn Bristowe's season of The Bachelorette in 2015, per Us Weekly. He also returned to the franchise the next year for Bachelor in Paradise and briefly dated co-star Juelia Kinney. The former investment banker met his future wife on Instagram in August 2017, and knew their connection was special right away, according to People. "I had a sneaking suspicion that we would get married," he said. "At least I was hoping that would be the case."

In January 2019, JJ proposed to Kayla in Hawaii after two years of dating, and shared the news with fans on social media. JJ posted a photo of the beach-side proposal on Instagram, captioning it, "She said YES!!!" He added: "I can’t wait to marry my best friend, my love, and the woman that has made me better since the day we met!" Kayla also shared a photo of the proposal on Instagram, writing, "Does this ring make me look.... ENGAGED??!!! I said yes to the man of my dreams and can’t wait to spend the rest of my life with my best friend."

JJ and Kayla have yet to share pictures from the ceremony with fans, but both posted about their excitement ahead of the event. On Jan. 29, Kayla posted a photo in front of "bride" balloons on Instagram, writing, "Mood all month: IM GETTING MARRIED!" Meanwhile, JJ reposted a photo from the proposal in January, writing, "only one month until the rest of our lives! So thankful for this family!" The former Bachelorette star might not have met his person during his time on the show, but it's clear the star got a happily-ever-after, after all.