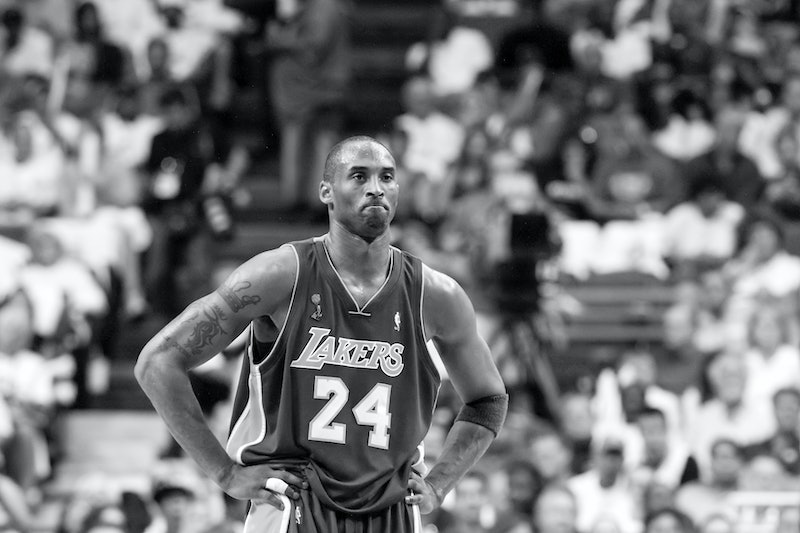 After his tragic death on Sunday, Jan. 26, the tributes to basketball icon Kobe Bryant are pouring in, and one artist has already released an emotional song in his honor. Bad Bunny paid tribute to Kobe Bryant on his new song "6 Rings." Needless to say, the track, which dropped on Tuesday, Jan. 28, already has fans in tears.

The track is a heartfelt, two-minute ode to the Lakers player. The Puerto Rican artist sings in Spanish about Bryant's great achievements and expresses his own devastation about the tragedy. The title "6 Rings" is a reference to Bryant's five championship ring wins, and a more sentimental ring: his marriage to wife Vanessa Bryant. “You won 6 rings, 5 with the NBA and one in a marriage that gave you your daughters," he sings, per a Rolling Stone translation.

He also pays tribute to Bryant's 13-year-old daughter Gianna, who was tragically killed alongside her father and seven others in the Calabasas helicopter crash, singing that they'll hopefully playing basketball together in heaven. "Thinking that one of them left with you, got me outta control," he raps "But nah, it’s so you don’t play ball alone in heaven.” The track ends with a recording of Bryant thanking fans as they chant his name, concluding with him saying his signature phrase, "Mamba out.” Someone pass me the tissues, please.

Upon hearing the news on Sunday, Bad Bunny took to Instagram to mourn the loss, calling Bryant his "favorite player forever." "I would never have imagined that this would hurt me so much!," he wrote, as translated by Rolling Stone. "I have never mentioned it because it does not necessarily have to do with music, but this man has been an inspiration in many ways for me to be what I am today."

Of course, the singer is far from the only person mourning, and many fans on Twitter are using his sentimental tribute to celebrate Bryant's incredible life — while trying not to cry too much.

And for those who may be surprised that Bryant had such a significant impact on Bad Bunny's life, it's not as far-fetched as you may think. The Lakers legend holds huge importance to Spanish and Latinx cultures, in part because of his loyalty to the communities, which make up a large demographic of Los Angeles, and his efforts to speak Spanish.

“Latino fans are important to me because when I arrived they were the fans who most passionately embraced me,” the player said in 2016, as reported by Remezcla. “Now, my Spanish is not that good, but I can speak a little. They mean everything to me.” And especially in the aftermath of his passing, it's clear, the feeling is mutual.