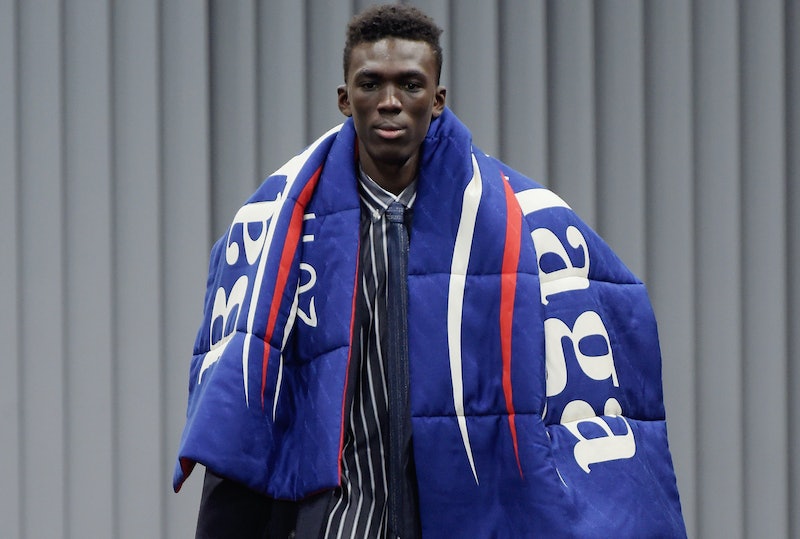 Balenciaga's newest menswear show is a reminder that though the Dems may have chosen Hillary Clinton over Sen. Bernie Sanders, Sanders's progressive presidential bid is far from forgotten. And Twitter's reaction to Balenciaga's Bernie-themed fall 2017 menswear show is solid proof fans still feel the Bern.

Georgian fashion designer and Balenciaga creative director Demna Gvasalia debuted his collection on Jan. 18 at Paris Fashion Week. According to Vogue, Gvasalia was inspired by "the subject of corporate dressing," so it's a little surprising he integrated Sanders's campaign logo, considering Sanders has been outspoken about the tax cuts corporations receive.

Bernie-themed pieces in Gvasalia's collection included T-shirts, bomber jackets, and a politicked-up version of a Lenny Kravitz classic embossed with a recreation of the easily recognized Bernie Sanders logo, with "Balenciaga" replacing Sanders's name. While Vogue noted that Balenciaga's version of the logo has three stripes while Sanders's had two, the logo redux is an obvious homage.

During his presidential run, Sanders found favor with the under-26 crowd, who were particularly fond of his policies on student loan debt and the minimum wage. And those folks — along with other meme-loving Twitter users — have Twitter a-frothing with hot takes on Balenciaga x Bernie.

Here's a look at some of the best responses.

4. Do You Hear The People Sing?

5. All About That Fan Life

Whether Sanders will be happy about the collection's nod remains to be seen. Until then, Twitter is sure to keep up a running commentary on everything Balenciaga: The good, the bad, and the Bernie.