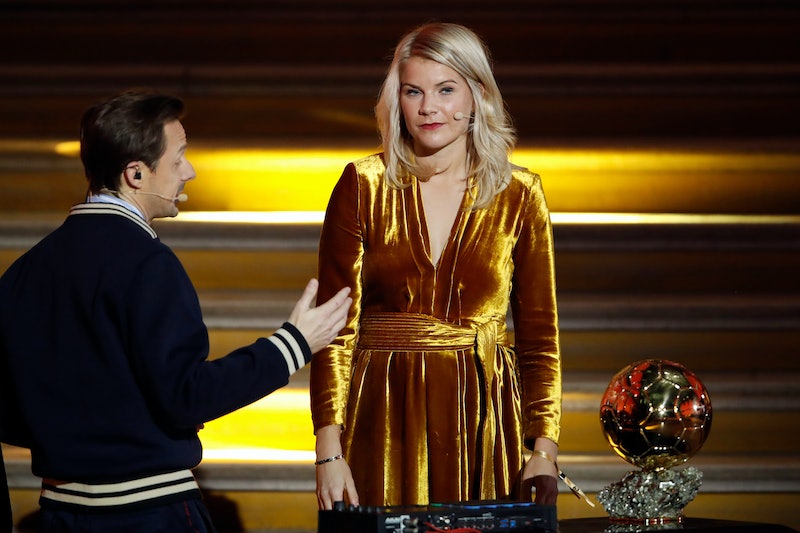 The Ballon d’Or, the world’s most prestigious accolade for any football player, has been running for 63 years. For 62 of those years, it has only recognised the best male player in the sport. And this year, on the 63rd iteration of the prize, they finally introduced the first ever women’s Ballon d’Or winner —a big moment for female football players around the world. So, why was Ballon d'Or Ada Hegerberg asked to twerk onstage after collecting her award? It honestly was a moment that made my stomach turn and had me reaching to throw my computer out the window.

Ada Hegerberg, a forward for French side Lyon and Norway, was awarded the Ballon d’Or on Monday evening in the brand new women’s footballer category. The award, which is awarded by journalists, recognised her talent as she proved instrumental in the recent Champions League as “the leading scorer with 15 goals,” the BBC reports, resulting in her team’s eventual win for the third year running.

I wish from the bottom of my heart that this could be just a happy story about her incredible achievements, but instead we have to talk about the downright sexist nonsense that she was subjected to onstage.

After Hegerberg walked out, kissed her trophy and gave a rousing speech in which she called the award “a huge step for women’s football,” she was asked to come downstage and speak with DJ Martin Solveig for a post-win interview.

Solveig then asked her in French, “Do you know how to twerk?”

Instantly, she told him, “No.”

Just look at how all the joy drains out of Hegerberg’s face, only to be replaced by quiet fury:

Honestly, I don’t know how she managed to restrain herself. I would’ve crawled over all the chairs in the audience to fight Solveig on her behalf.

Although Solveig apparently danced with earlier winner Kylian Mbappe, I doubt asking him to twerk would have crossed his mind for even a second. And it seems like the room knew it just as well too, as after Hegerberg turned away from Solveig the camera panned to Mbappe, who looked just as exhausted by Solveig’s bullsh*t as I am.

By asking her that unnecessary question, Solveig made what probably was the best moment of Hegerberg’s life all about him. In misguided attempt to win over the audience and set himself up as some sort of comedian (side note: he really isn’t), he took all the attention away from her talent and reduced her to her sexuality.

Solveig apologised in a Twitter video after backlash against his question started spreading online. In it, he explained that his “English level” and his “English culture level” were to blame for his ignorance. And he might have gotten away with the excuse too, if he hadn’t a) been speaking in French, and b) been at a French awards ceremony.

He said, “Guys, I’m a little amazed — astonished — by what I am reading on the internet. I of course didn’t want to offend anyone. This come from a distortion of my English level and my English culture level, which is obviously not enough, because I didn’t mean to offend anyone.”

He also pointed out in the entire sequence (most coverage was cut after Ada’s response to his degrading twerking comment), that he and Ada actually wound up dancing to Frank Sinatra afterwards.

His caption to the video read, “I don’t invite women to twerk but dance on a Sinatra song. Watch the full sequence People who have followed me for 20 years know how respectful I am especially with women.”

It goes without saying that I’m furious about Solveig’s comment. But what I’m more furious about is the fact that Hegerberg was put in a position where she had to be so gracious about the whole thing. She could have easily gone scorched earth, but instead she has gone out of her way to help contain Solveig’s mess.

Hegerberg could have walked offstage after that comment. Most people would have. But she stayed and helped Solveig save face by agreeing to dance with him. Because that’s what women do, we clean up men’s sh*tty messes — not because we want to, but because there’s pressure on us to be better than them.

Just take a look at how the recent Serena Williams situation went down during the U.S. Open final, where she had a go at the referee just as so many male players have in the past. In the past, others have thrown furious tantrums and yet she was dragged harder than any of them for calling the referee a “thief.”

And yet, Hegerberg threw Solveig a lifeline in his follow up tweet. He wrote, “I explained to @AdaStolsmo the buzz and she told me she understood it was a joke. Nevertheless my apologies to anyone who may have been offended. Most importantly congratulations to Ada.”

Accompanying the tweet is a photo of Hegerberg and Solveig laughing as they shake hands. I bet Solveig’s PR team is counting their blessings that Hegerberg agreed to that photograph at all. By agreeing to that photograph, she gave Solveig a leg to stand on — something he can use as proof that he isn’t *really* sexist because she isn’t *really* mad.

I'm also not going to get into the fact that he said he "explained...the buzz," as though it wasn't obvious she got it from the moment he asked her and she ground out a firm "no." Can we just take a moment to take in the sheer audacity that Solveig took it upon himself to mansplain sexism to Hegerberg? I really, cannot today. Or any day.

Hegerberg also went above and beyond as when a reporter for the Associated Press asked her about the incident afterwards, she saved his ass again. Despite Solveig omitting an apology to Hegerberg on social media, she told reporter John Leicester, “He came to me after the situation and he apologised. But I didn’t take [his comments] as [sexist] at all.”

She continued, “I got to dance a bit and I got the Ballon d’Or and that was in my mind, it was something special...It’s sad if people thought about the situation like that, but it didn’t come to my mind at all. I think there are a lot of other subjects to discuss when we talk about sexual matters.”

The biggest shame in all of this is that the women’s Ballon d’Or should have been such an empowering moment, not just for women, but for the entire sport as a major step towards gender equality. Instead, we’re here talking about some ignorant comment a man made to get a laugh at a woman’s expense. Sigh.