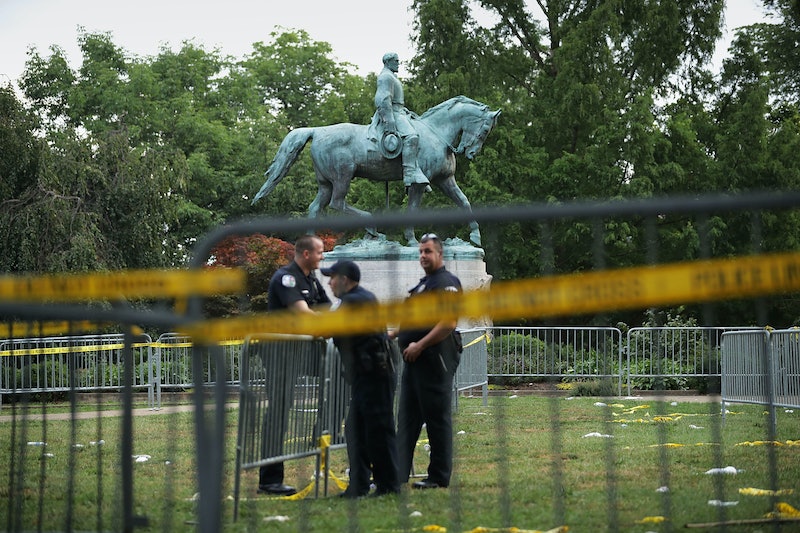 The campaign to remove Confederate statues in Charlottesville may be delayed thanks to the white supremacist violence over the weekend. But one neighbor to the north didn't wast any time in taking down its own shrines to the military generals who fought for the South. Baltimore removed its Robert Lee and Thomas Jackson statues in the early hours of Wednesday, and there are photos to prove it.

On Monday the city council voted unanimously to remove the city's four Confederate statues. In addition to the statues of army generals Lee and Jackson, the city had three more. One of the others was also taken down Wednesday, that of Roger B. Taney, the U.S. Supreme Court justice who wrote Dred Scott v. Sandford, which basically said it was okay to treat African Americans unequally given the prejudice at the time the Constitution was written. The two other monuments are for Confederate soldiers and sailors, and Confederate women.

What exactly will happen to the statues remained a point of contention on Monday night. Some on the council were for melting them down, given their role in supporting slavery. "We should melt them down and use them to erect statues of true heroes of Baltimore," Councilman Brandon Scott said. Others were pushing that they be moved to museums or Confederate cemeteries.

Whatever their ultimate fate may be, Lee and Jackson were very visibly taken down, with residents there to cheer on the process.