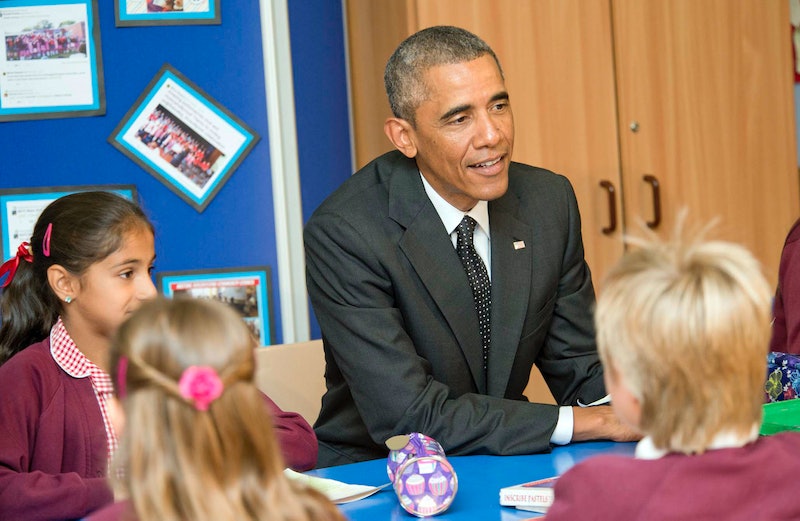 As the debate over tearing down historical Confederate monuments continues, one elementary school in Richmond, Virginia — the former capital of the Confederacy — is looking no further than the 44th president. In a 6-1 vote, the Richmond school board decided on Monday to convert a Confederate-named school to Barack Obama Elementary School.

In fact, among students, Obama's name was voted in second, with Northside Elementary, named after the school's location, coming in first. However, on the school administration's recommendation, the school board went ahead with Obama.

"It’s incredibly powerful that in the capital of the Confederacy, where we had a school named for an individual who fought to maintain slavery, that now we’re renaming that school after the first black president," Superintendent Jason Kamras told the Richmond Times-Dispatch. "A lot of our kids, and our kids at J.E.B. Stuart, see themselves in Barack Obama."

The single dissenting vote came from school board member Kenya Gibson, who argued that the school be named after someone more specific to Richmond, instead of Obama.

"This is Richmond and we are about history and we have so many great local stories to tell," Gibson told theTimes-Dispatch. "Our local stories are so important to cherish."

One other school board member, Jonathan Young, was not present, but said he also would have voted against the name change. His reasoning was that the school could use building renovations more than a new namesake.

In May, the Richmond school board released an estimate of the costs of renaming the elementary school. Between replacing old signs and plaques, and purchasing new stationery, t-shirts, and other supplies, the total runs to $26,000.

Richmond is not the first district to rename a school formerly honoring a Confederate figure, nor is it the first to pay tribute to Obama. Last October, a Mississippi school board renamed Jefferson Davis Elementary — after the short-lived president of the Confederacy — Barack Obama Elementary as well.

The Virginia counties of Petersburg and Hanover are also going through similar name-changing debates. The Petersburg school board voted unanimously in February to rename A.P. Hill, Robert E. Lee and J.E.B. Stuart elementary schools, with donations from community members to help fund the changes. Hanover's school board rejected a motion to change the names of Lee-Davis High School and Stonewall Jackson Middle School in April, but community advocates are reportedly pushing the board to reconsider its vote.

The debate over Confederate monuments, which pits preserving history against glorifying the nation's slave-owning past, came to a deadly inflection point in August, when a white supremacist "Unite the Right" rally in Charlottesville lead to the death of Heather Heyer, and the injury of 19 other counter-protestors.

Following the rally, Richmond mayor Levar Stoney set up a commission of historians and city council members to determine how best to address Richmond's Monument Avenue, a controversial city landmark containing statues that memorialize Confederate figures like Robert E. Lee. The commission is expected to deliver its report next month.