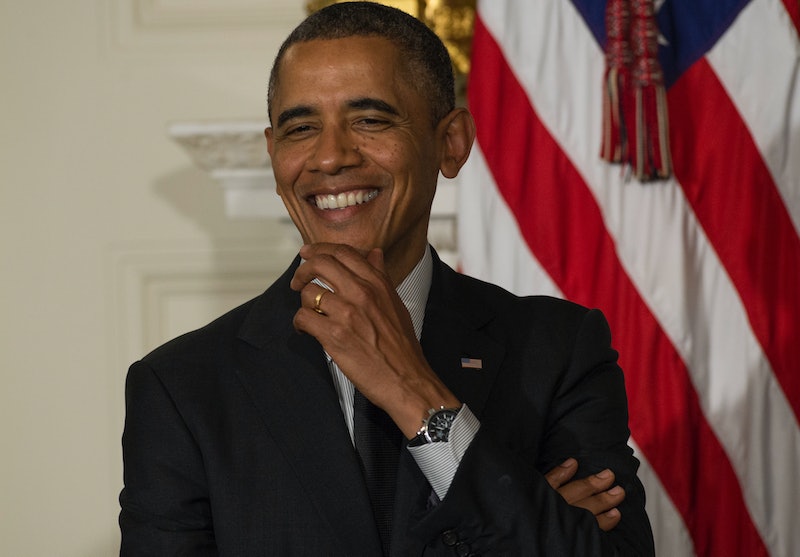 The end of another year is coming to a close, which means it's time to look forward to Barack Obama's annual listings of all his favorite things. From books and TV shows to movies and music, the former President of the United States has rounded up everything that made the biggest impact on him throughout the year. And while each list is fascinating in its own way, Lizzo and Beyoncé hits were included in Obama's favorite songs of 2019, proving once and for all that his taste in music is of the highest caliber.

The mix of songs is varied, ranging from popular hits to surprisingly obscure choices to a classic Dad move. But given how vast the playlist is, it's clear the former Commander in Chief appreciates a good lyric when he hears one, especially if it comes from powerhouse talents like Solange and Rosalía.

“From hip-hop to country to The Boss, here are my songs of the year,” Obama wrote in a tweet, alongside the full 2019 playlist he'd created. “If you’re looking for something to keep you company on a long drive or help you turn up a workout, I hope there’s a track or two in here that does the trick.”

Aside from Lizzo's hit song "Juice" and Beyoncé's track "Mood 4 Eva," Obama also named songs like "Old Town Road (Remix)" by Lil Nas X, featuring Billy Ray Cyrus as well as Bruce Springsteen's "Hello Sunshine" and Frank Ocean's "In My Room." The list can also be found on Spotify, allowing you to enjoy some of Obama's faves at your own leisure. His taste runs the whole gambit of almost every possible music genre, from R&B, country, hip-hop, folk-rock, indie-rock, and Latin music to classic rock 'n roll. There's something for everyone to enjoy.

And yes, in case you were wondering, Lizzo is already well aware that one of her songs made the cut on Obama's music list and she couldn't be more thrilled about the honor. "I love you so much Mr. Obama.. thanks for assisting me with my morning cry," she tweeted in response to his music post. You could go so far as to say that she's feeling good as hell. But when you know the beloved former President is a fan of your work, how could you not?