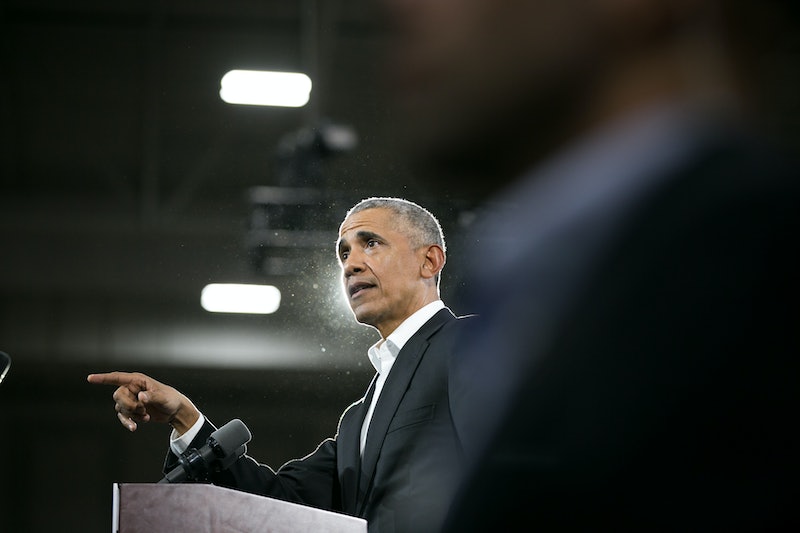 Former President Barack Obama has a reputation for knocking it out of the park with great year-end lists. Be it his favorite books, movies, or music, the former president is known for introducing others to thought-provoking new reads, eye-opening films, and just down right great jams. But along with sharing his picks for 2018's best pop culture highlights, Obama also shared his list of some of the year's most inspiring young leaders. Obama's New Year's resolution tweet also comes with a list of his picks for 2018's inspiring young leaders

"As the year winds down and we look toward 2019, I'm asking you to make a commitment," the former president tweeted Saturday. "Find something you want to change in your community and take the first step toward changing it."

To help his followers get started on what might understandably feel like an incredibly daunting request, Obama shared the stories and work of five young leaders he said inspired him in 2018. "Their journeys began with a decision to build the better future they wanted to see," the former president tweeted. "The same is true for you. What matters isn't the size of the step you take; what matters is that you take it."

So, who inspired Obama this year? First on his list of inspiring young leaders is Dejah Powell, who, along with two friends, started Black & Well. In a tweet posted Saturday, Obama described the organization's mission as being "to bring health and wellness resources to communities on the South Side of Chicago, expanding food access and providing people the space and time to take care of themselves."

Former President Obama also highlighted the work of Moussa Kondo and Sandor Lederer, who he described as "two people separated by continents but united in their pursuit of a more just, transparent society." Obama cheered Kondo and Lederer for "doing their part to fight corruption in their native countries."

According to the Obama Foundation, Kondo founded a chapter of the U.S.-based non-profit known as the Accountability Lab in his native country of Mali. The organization seeks to boost the profile and publicity of honest civil servants. In his own native country of Hungary, Lederer founded K-Monitor, an anti-corruption watchdog group that aims to help citizens obtain the tools and resources needed for greater government transparency and democracy.

Obama also celebrated the work of climate activist Hong Hoang, whom he said "mobilized a youth-led movement to create a greener world after becoming the first Vietnamese person to visit Antarctica." According to the Obama Foundation, Hoang is an Obama Foundation Scholar at Columbia University. She also works to organize youth movements to fight the use of fossil fuels in Vietnam, Singapore, Cambodia, Laos, Myanmar, and Thailand as 350.org's East/Southeast Asia coordinator.

To end his list, the former president spotlighted the work of Jonny Boucher, whom he described as "a Chicago native who, after losing too many friends and family to suicide, started a coffee shop to offer emotional support and guidance to those who might be in need of a little more than a strong cup of coffee to get through their day." Boucher's Sip of Hope Coffee Bar seeks to help erase the stigma that surrounds mental health while also supporting suicide prevention.

"I hope you find inspiration in the stories of Dejah, Moussa, Sandor, Hong and Jonny," Obama tweeted Saturday, encouraging all of his followers to commit to being the change they want to see in their local communities in 2019.