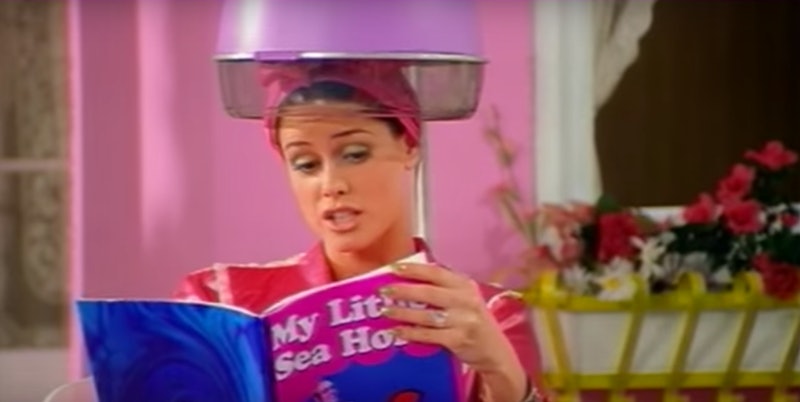 Few songs were are infectious in the '90s as Danish-Norwegian group Aqua's "Barbie Girl." The song, brimming with '90s Euro dance-pop vibes, was on constant rotation when it came out back in 1997. For us young Millennials, "Barbie Girl" was probably just a silly song about a toy we all played with growing up. However, 20 years later, "Barbie Girl" is neither feminist or fun as we might remember. Something about it feels gross when you're listening to it, as if the innocence of a doll like Barbie shouldn't be associated with lyrics like, "I'm a blond bimbo girl in a fantasy world." Gross, right?

Let's be honest: we all got fooled by the cheeriness of the music that transported us into the world of "Barbie Girl." We were just young and carefree back in the '90s and this song knew it. Now, maybe it's because I'm a bit older and a bit wiser (just a bit), I find the "Barbie Girl" lyrics are much less in support of women choosing to do with their bodies and lives what they will; it's actually in opposition to the feminist ideas around female agency, independence, and empowered sexuality that Millennial women these days are being encouraged to embrace.

Let's examine the song that incurred a lawsuit: "Barbie Girl."

Right off the bat, it's clear that the Aqua version of Barbie is going to be an oversexualized, idealized image of femininity whose vocabulary is rife with double entendre and innuendo. As Barbie and Ken say 'hi' to each other, Ken proceeds to suggest they go for a ride. He's driving a car but guys, I think we all know what kind of ride he's referring to.

The idea that Barbie's simply there for Ken's sexual pleasure is reinforced in the first verse, people.

I'm a blond, bimbo girl, in the fantasy world

Dress me up, make it tight, I'm your dolly

You're my doll, rock'n'roll, feel the glamour in pink

Kiss me here, touch me there, hanky panky

Those first two lines are sung by Barbie (aka Aqua's only female member, Lene Nystrøm) and Ken (aka the curiously coifed René Dif) take the last two lines. It's a weird establishment of the relationship between this musical version of Barbie and Ken, not to mention the fact that it wastes no time insinuating what Barbie's purpose is in this world.

That's right: Barbie has a pre-ordained purpose and — surprise! — is one that isn't for her personal benefit. It's for Ken's. It doesn't help that she demeans herself by branding herself a "bimbo," nor is it particularly feminist of Ken to try and control her sexually for his own pleasure. This is squicking me out.

Right off the bat, "Barbie Girl" can alienate even the most lenient of feminists. Not only does the song throw out the word "bimbo" so happily and so casually, but then we get the sense that Ken is taking liberties with Barbie's encouragement to do with her whatever another person pleases. The uncomfortably saucy direction only gets weirder in the second verse, where Barbie tells us she's happy with whatever clothes you dress her in or even how you manipulate her body.

Make me walk, make me talk,

Do whatever you please

I can act like a star, I can beg on my knees

Come jump in, bimbo friend, let us do it again

Pardon me while I go puke forever. "Barbie Girl" might actually be the most repugnant '90s song of all time. Never mind that Barbie is insinuating she'll perform oral sex for approval, but the fact that this is sung by a woman who is practically chirping with cheer makes the message feel even more crass and un-feminist.

Let's not kid ourselves about the hook and chorus. It's the crown jewel in this hot mess of reductive feminism.

I'm a Barbie girl, in the Barbie world

Life in plastic, it's fantastic

You can brush my hair, undress me everywhere

Imagination, life is your creation

This is peak mixed messaging in the world of "Barbie Girl." Where objectification and hypersexualization are king, this hook and chorus combine with the result effect of a serious stomach churn. Barbie is giving herself over to someone else completely. She doesn't allude to having thoughts, feelings, or desires of her own. She rejoices at a plastic life but fails to give us any reason to believe that life is fulfilling her needs on a real level.

Oh, and before you try to tell me that the, "imagination, life is your creation" line is a silver lining, stop yourself. That's not about Barbie telling us that if we lived like Barbie, we'd feel more fulfilled or creative because that quality of life is better. No, it's because Barbie wants us to mess around with her, manipulate her, and make her over in some commodified and cheapened image for our own pleasure.

Unlike other actually feminist properties that use stereotypically girly female characters to subvert expectations and make smart feminist commentary (I'm looking at you, Legally Blonde), "Barbie Girl" feels hollow and discomfiting. Devoid of any real meaning about what it's like to be a woman in a world that seeks to objectify us, dripping in sexual innuendo that only serves the male gaze, and yes, lackluster in the empowerment department, "Barbie Girl" fails to offer women anything fun or fresh on its 20th birthday.

We may have all be sucked in by the effervescence of "Barbie Girl" back in 1997, but hindsight is 20/20. Contrary to the happy ending (oh god, the double entendres have gotten to me) foretold for both you and Barbie should you choose to play with her, there's nothing fun or feminist about this song.

More like this
You’ve Been Singing The Wrong Lyrics To “All I Want For Christmas Is You”
By Sam Ramsden
The Indigo Girls Taught Me Queer Relationships Could Be Messy, Too
By Hannah Soyer
MOBO Awards Found Kanya King On The Woman Whose Grit & Determination Spur Her On
By Kanya King
The 'Kenan & Kel' Reunion On 'SNL' Took A Dramatic Turn, Thanks To Keke Palmer
By Brad Witter
Get Even More From Bustle — Sign Up For The Newsletter