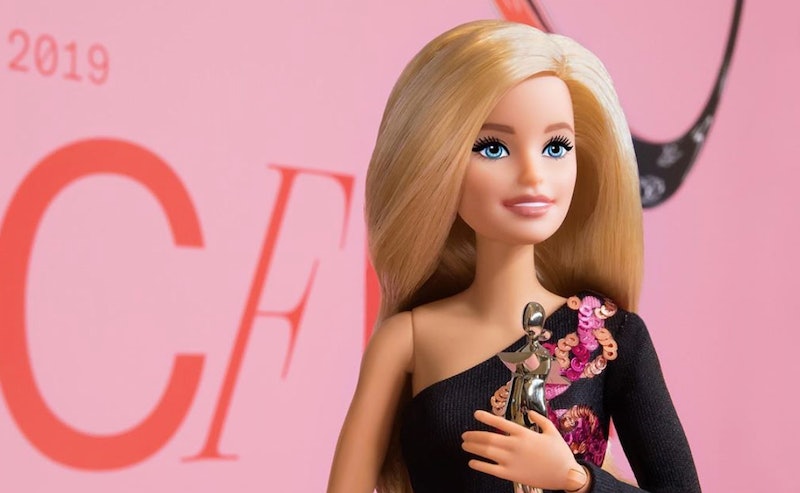 Jennifer Lopez received the Fashion Icon award at the 2019 Council of Fashion Designers of America Awards. However, she wasn't the only style star celebrated at the event. Barbie received the Board of Director's Tribute Award at the CFDA Awards. To accept the prestigious honor, Barbie wore a custom Diane von Furstenberg dress to the ceremony, held on June 3 at the Brooklyn Museum in New York. The dress was more luxe than anything you own, too.

Barbie totally slayed the red carpet and was one of the best-dressed attendees. Her one-sleeved, column-shaped gown was anything but a basic LBD. Rather, the outfit was all about the details. It boasted a pink and purple sequin design woven throughout the front. The dress was also tied at the waist. Barbie finished the look with a pair of strappy black heels that featured a hot pink sole.

As noted in the caption of Barbie's Instagram post revealing the dress, von Furstenberg is in her final year as the chairwoman of the CFDA. She is also a longtime friend and collaborator of Barbie. Therefore, it made total sense for Barbie to wear one of DvF's glamorous designs while accepting the award.

Barbie, who is celebrating her 60 anniversary this year, wore her long, platinum blonde hair falling in waves down her back. The loose yet high volume style was the perfect counterbalance to her straight frock.

Past recipients of the Tribute Award include Tom Ford, Michelle Obama, Janelle Monáe, and Gloria Steinem. However, Barbie is the first non-human to be honored. According to the announcement press release, the CFDA selected Barbie for the 2019 Tribute Award because she "has had such a wide influence on American fashion and culture." Barbie was also chosen because she is the ultimate fashion collaborator. She has worked with an impressive array of over 75 designers and influencers throughout the years, ranging from Oscar de La Renta to Bob Mackie to Jeremy Scott for Moschino.

Designers such as Tory Burch, Zac Posen, Vera Wang, Prabal Gurung, and Tommy Hilfiger spoke candidly about Barbie's sphere of influence over the past 60 years in the CFDA tribute video posted above.

"Barbie is the greatest fashion influencer because of her longevity," Wang stated. She also noted the doll's increased diversity in recent years. Meanwhile, Von Furstenberg pointed to Barbie's continued evolution as the reason for her long-lasting appeal. "She can be a pilot and a warrior and scientist," the designer said.

Barbie further documented her trip to the Big Apple for the CFDAs on social media, showing off the various ensembles she wore while out and about. The shots served as even more proof of her signature style and the fact that she deserved her CFDA honor. She traveled to the city in high-waisted, dark wash jeans, and a houndstooth print blazer, which she paired with trendy round sunglasses.

Barbie opted for a millennial pink wrap dress, chunky wedge sandals, and a roomy tote while on the go in Manhattan. The outfit was so adorable that it might inspire her millions of fans to search for a similar, human version.

It has been 60 chic and stylish years of Barbie. Here's to 60 more.