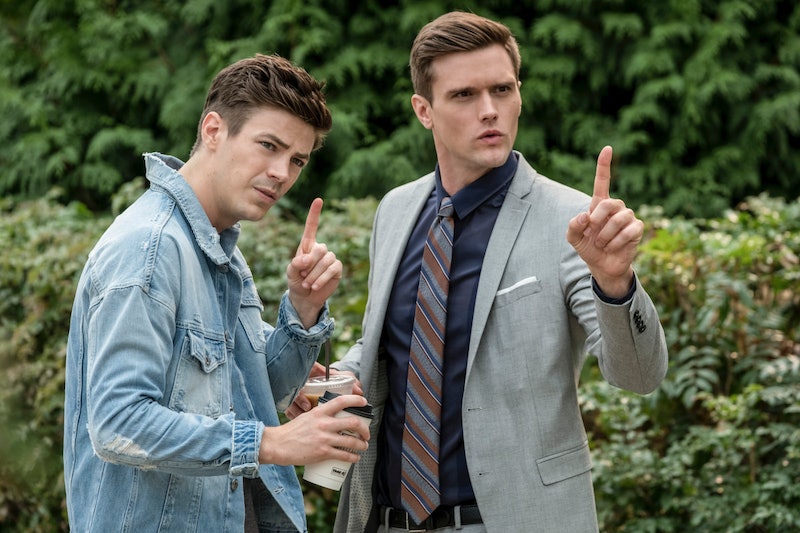 Since the beginning of The Flash Season 4, the Thinker has always been one step ahead of Barry and Team Flash. But, in "When Harry Met Harry..." it looks like Barry might have sped up the Thinker's timeline when the team tracked down the name "DeVoe." After an exhaustive search, Barry meets Clifford DeVoe on The Flash, but the Thinker's cover is convincing — eerily so. When Barry and Joe go to confront DeVoe at his Central City home, they think they'll be coming face to face with their most intimidating villain yet. Instead they are met with a sweet wife and her professor husband. The wife (aka the Mechanic seen in scenes with the Thinker) and DeVoe (the Thinker) sure don't look like the creepy mad scientists they've appeared as thus far. So, what gives?

Early in the episode, the Mechanic warns the Thinker that Barry is closing in on him faster than he had anticipated, which would suggest that they had always planned for Barry to find out who he was. This raises a few questions, not the least of which is how the Thinker would know that Barry would recognize the name "DeVoe" as a future enemy. Most of all, however, it opens up an entire new host of possibilities for the Thinker's endgame. What good is it to have Barry meet Clifford DeVoe? How does this play into the Thinker's plans?

Upon meeting Clifford DeVoe, a normal looking (gone was the pale skin and freaky metal thinking cap) man living in an ordinary suburban house, Barry looks pretty shocked. If DeVoe/Thinker's goal was to throw the Flash off of his game, it's definitely working. Barry thought for he'd be able to take a villain down before the fight even started, only to find himself face-to-face with a seemingly nice, normal man. (A man who, it's worth noting, has not committed a crime for either Joe or The Flash to legally take him down for.)

Moreover, Barry might have completed another part of the Thinker's plan by locking up Mina, aka Black Bison, one of the bus metas who surfaced in Central City on the hunt for priceless Sioux artifacts. Though we don't see what happens to her after Barry and Ralph Dibny stop her, it's safe to assume that at the end of "When Harry Met Harry..." Mina is locked up in Iron Heights along with Becky (aka Hazard) and Ramsey (aka Kilg%re). To recap on the bus metas: that's three bus metas in Iron Heights, one bus meta on Team Flash, one bus meta captured (or otherwise engaged) by the Thinker, and seven more on the loose. What that means in terms of the Thinker's timeline, we don't know. But, it certainly looks like whatever his plan is, he's not content watching idly by as Barry rounds up the bus metas anymore. He's ready to play a more active role.

For the record: it's still entirely possible that the Clifford DeVoe Barry and Joe meet in "When Harry Met Harry..." isn't the Thinker. Let us never forget that multiple Earths are at play in The Flash. However, that theory is looking less likely, especially considering the Mechanic's earlier expressed concern that Barry would find them. Assuming the Clifford DeVoe meets at the end of the episode is the Thinker, then the question becomes what does he think Barry is going to do next. Is he ready for Barry to throw him in jail on sight? Or does he think that Barry will be easily dissuaded and simply move on looking for the next DeVoe?

One thing's for sure: to learn more about this new enemy, Barry is definitely going to want to go back to the algorithm that allowed Harry to track him down. Earlier in the episode, during a meeting with Harrison Wells from three other Earths, Harry determined how to narrow down the search for DeVoe. One of the parameters was adjusting the psychological profile. Something tells me that's going to come in handy in the weeks ahead.